Canada is reaffirming its unequivocal support of Israel's bid to block a Palestinian attempt to pursue war-crimes charges against the Jewish state at the International Criminal Court.

The Palestinians "made a huge mistake" by going to the ICC, an United Nations institution that Canada played a lead role in creating in the 1990s, Foreign Affairs Minister John Baird said Monday in Jerusalem.

Prior to meeting Israeli Defence Minister Moshe Yaalon as part of his five-day visit to the region, Baird said the Palestinians crossed a "red line," and that he "communicated that in no uncertain terms" to Palestinian leaders a day earlier.

Baird's spokesman Adam Hodge said Canada is "considering a number of options in response to ... the purported Palestinian accession to the ICC." Canada has told the prosecutor that "the Palestinians are not a state" and should not be allowed to join the court.

"We intend to communicate further views to the prosecutor in due course," Hodge said.

"You know that it's a travesty of justice to haul Israel to the dock in The Hague, and you know that the entire system of international law could unravel because of this travesty," Netanyahu said.

"I thank you for your support and for your moral leadership, and I pledge this to you: Israel will not have its hand tied by a politicized ICC."

Before shaking hands with Netanyahu, Baird replied: "Canada doesn't stand behind Israel; we stand shoulder-to-shoulder with it."

"We are part of the ICC. The ICC should be independent. It is very important as a judicial institution that it be able to take in information and make decisions independently," said Dewar.

One Canadian official, not authorized to discuss the matter and speaking on condition of anonymity, said Baird and Netanyahu met for almost an hour in the prime minister's office and discussed a range of issues, including "the Palestinian Authority's misguided attempt to accede to the Rome Statute."

The Rome Statute is the international treaty that led to the creation of the International Criminal Court, giving it jurisdiction over crimes against humanity and war crimes.

On Dec. 31, Palestinian President Mahmoud Abbas formally signed the documents necessary to accede to the treaty, one day after the UN Security Council rejected a resolution brought by the Palestinians that would have set a three-year deadline for the establishment of a Palestinian state on lands occupied by Israel.

As Baird arrived in Israel this past Friday, the prosecutor of the ICC announced she was starting a preliminary investigation that could clear the way for a full-scale investigation into possible war crimes in the Palestinian territories —a development with serious implications for both sides of the Middle East conflict.

The investigation could look at allegations of war crimes by Israel during last summer's Gaza war, in which Palestinians suffered heavy civilian casualties, as well as Israel's settlement construction on occupied Palestinian lands.

It would also likely consider alleged war crimes by Hamas, which fired thousands of rockets at crowded Israeli neighbourhoods from Gaza.

Canada has been one of only a few Western countries to stand by Israel as it comes under fierce international criticism over deadlocked negotiations with the Palestinians, the recent Gaza war and its continued construction of settlements.

Canada has expressed opposition to the unilateral attempts by the Palestinians to reach statehood.

On Sunday, when Baird met with Palestinian officials in Ramallah, demonstrators unhappy with Canada's staunch pro-Israel stance pelted Baird's motorcade with eggs and shoes — none of which hit the minister directly.

Baird said afterwards his meeting with Palestinian Foreign Minister Riad Malki was "cordial and constructive" and featured some candid exchanges about issues over which the two sides differ.

Said Hamad, the Palestinian envoy to Canada, issued his own statement on Monday saying Baird was welcomed for "an honest and open" discussion on the Middle East situation.

"There are areas where we have significant disagreements, but it has always been our policy to broach differences of opinion through constructive engagement," said Hamad.

"We thank the Canadian people for their continued generous aid to Palestinians as we strive to secure our inalienable right to self-governance and to live in peace, as equals, with Israel." 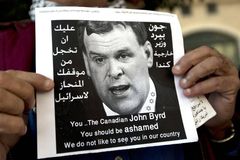 Baird decides not to visit Muslim holy site on trip to Jerusalem
January 16, 2015 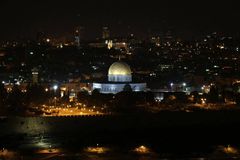