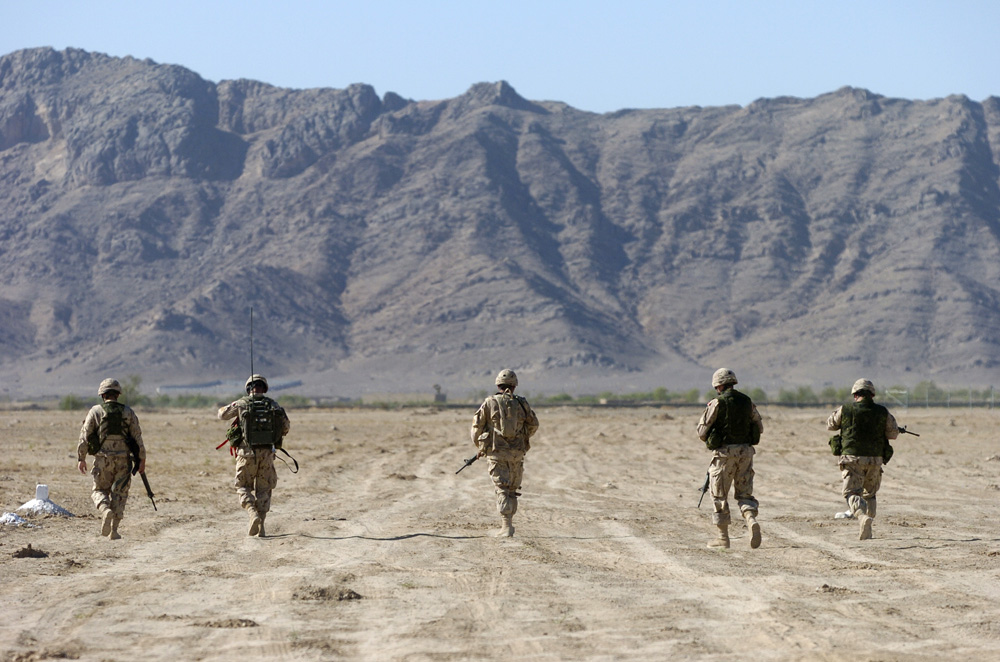 A new analysis reveals that Canadians injured in the line of duty are eligible for significantly less financial compensation than the amounts provided to disabled soldiers in the United Kingdom, Australia and the United States – raising questions about the Conservative government’s claim that its support for wounded veterans is world-class.

A comparison of monetary compensation offered to disabled veterans in Canada, Britain, Australia and the United States

A lump-sum payment of up to $306,698.21 which can be taken in a single payment or spread out over multiple payments. The amount offered depends on the degree of disability. Someone with mild hearing loss, for instance, might collect just $14,929, while someone who has lost the complete function of their lower limbs and is confined to a wheelchair might receive the maximum. Of the 45,615 veterans granted a lump-sum payment between 2006 and 2014, just 185 received the maximum. It is non-taxable.

An earnings-loss benefit of 75 per cent of salary for two years (or longer if the veteran is taking part in a vocational or rehabilitation plan), all of which is taxable and from which any outside earnings are deducted dollar-for-dollar for veterans who are permanently and totally incapacitated and at 50 cents on the dollar for those in a rehabilitation plan. For those who are permanently incapacitated and unable to work after the two-year period has ended, the benefits can continue to age 65, with annual inflation increases of up to 2 per cent.

There are three grades to this allowance with the lowest being $584.66 monthly, which is what most veterans get. The middle grade pays $1,169.33 a month and the highest grade pays a maximum of $1,753.97. In addition, there is supplement for most, but not all, veterans who are receiving the permanent impairment allowance of $1,074. The allowance and the supplement are taxable.

Lump-sum benefits are available up to a maximum of $1,092,348. This was originally set in 2005 at half that amount but was doubled in 2008 when it was deemed inadequate.

Severely disabled veterans receive 100 per cent of their military salary tax-free for life.

Lump-sum benefits of up to $420,207 are available, but veterans can choose instead to receive this as a fixed-rate weekly pension which, for someone who starts receiving payments at the age of 25 and dies at the age on 80, would amount to a total of $902,261. This is tax-free.

Lump sums are awarded for spouses and children of severely disabled vets. For each child, for instance, a veteran would receive $80,956.51.

An earnings-loss benefit pays 100 per cent of the difference between what veterans were making before their injury and what they are making after their injury, for the first 45 weeks of incapacity. When the 45-week period ends, they are paid between 75 per cent and 100 per cent of the difference between what they were making preinjury and post-injury, depending on how many hours they are able to work. These payments are taxable.

Tax-free disability pension ranging from $167.58 for someone with no dependents and only a mild impairment, to as much as $4,010 per month for a severely incapacitated veteran with one spouse and a child. In addition, there are supplements of up to $10,836 monthly for those with dependents who are severely disabled and need special help.

The Conservatives are fighting the perception that the party, which styles itself as pro-military, is failing veterans as Canada transitions from serving elderly veterans of the Second World War and Korea to helping a smaller number of young Afghanistan veterans who are suffering from psychological illnesses and debilitating physical injuries.

Veterans Affairs Minister Erin O’Toole, who replaced Julian Fantino in the portfolio earlier this year, is vowing to take steps in the coming months to repair relations with those veterans, a politically sensitive constituency in advance of this year’s federal election.

Retired Major Mark Campbell, at home in Sturgeon County, Alta., lost both of his legs in Afghanistan and is a participant in a class-action lawsuit brought by veterans fighting for more generous benefits. He says new rules enacted in 2006 mean he loses out on $35,000 a year in disability benefits.

But many veterans say those moves are just tinkering. They argue they are getting a raw deal under the New Veterans Charter, which was passed into law in 2006 and replaced a system that provided veterans with lifetime pensions.

An analysis of the money paid to disabled vets by Canada’s closest allies suggests those concerns may be well founded.

Whether it is a comparison of lump sums awarded according to the level of injury, or the ongoing payments meant to replace the incomes of those who can no longer do their jobs, Canada’s remuneration comes up short – in some cases by hundreds of thousands of dollars.

“Veterans benefits around the world are universally complex to both access and understand,” said Sean Bruyea, a retired Air Force captain and veteran’s advocate who helped The Globe and Mail obtain and analyze the numbers from other countries.

But “veterans instinctively know that the programs under the New Veterans Charter are deficient,” Mr. Bruyea said. “For the government to tell them otherwise really is just stepping on veterans’ hearts and destroying their dignity.”

Trying to compare the compensation offered by the Canada, Britain, Australia and the United States is difficult because each jurisdiction provides money to its veterans in different ways, and all four countries have additional programs that go beyond direct financial compensation. In Canada, for instance, the Veterans Affairs department provides an independent living program that includes grounds-keeping among other home-care services.

In addition, the level of service to veterans is not equal. There have been complaints in the United States, for instance, about a huge backlog of unprocessed claims. And the delivery of health care is not the same on both sides of the border.

But, looking solely at the money paid to those injured while they were in the military, this country lags behind. 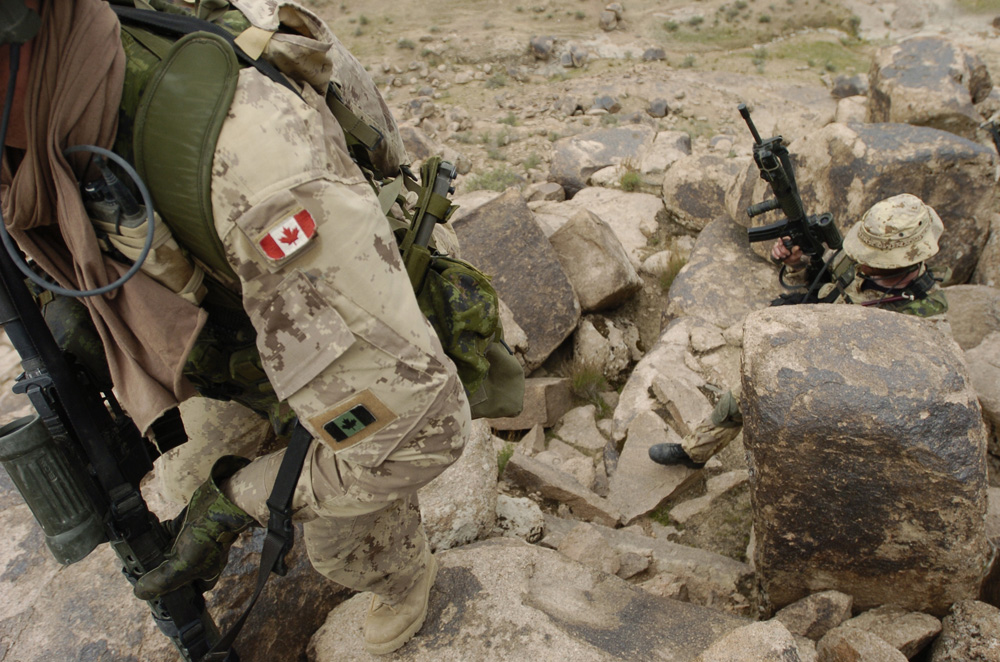 Members of the PPCLI 1st Battalion, A Company 3 Platoon scale the side of foothills moving through enormous boulders while on patrol in Kandahar province, Afghanistan. (Louie Palu/The Globe and Mail)

While Canada offers lump-sum payments of as much as $306,698.21 to its veterans depending on the level of their injury, Britain will pay up to the equivalent of more than $1-million Canadian dollars.

Australia’s maximum lump-sum payment is in excess of $400,000 (Canadian), and veterans in that country can choose instead to receive a non-taxable, weekly pension which can amount to more than $900,000 for a soldier who retires in his 20s and lives into his 80s. Lump sums are also given to children of disabled Australian veterans, which does not happen in Canada.

The United States provides a tax-free disability pension that ranges as high as $4,010 (Canadian) per month, depending on the level of injury and the number of dependents. In addition, there are supplements of up to $10,836 (Canadian) monthly for the most seriously disabled.

Canada has a program that compensates disabled veterans for lost wages which pays 75 per cent of their military salary. This country also provides a permanent impairment allowance and a supplement that can combine to equal a little over $2,700 monthly. But most soldiers who qualify for that allowance receive far less than the maximum, and the money is taxable.

In Australia, on the other hand, the earning-loss compensation can amount to 100 per cent of a veteran’s former salary if he or she is completely unable to work. And in Britain, the most severely disabled veterans receive 100 per cent of their military salary tax-free for life.

Prime Minister Stephen Harper has defended his government’s approach to veterans, saying Canada’s programs and services are the best in the world.

Mr. O’Toole, the Veterans Affairs Minister, said there are a number of programs and benefits offered to disabled Canadian soldiers which, when added to the amounts they are paid, makes Canada’s system of compensation one of the best anywhere. “On a category by category comparison,” he said in an e-mail, “some of our allies may have a few items that have stronger support than we have at present, but in other areas they offer less in terms of programming or financial supports.”

Not only does Canada have a good health-care system which in not available in every country, Mr. O’Toole said, but there are medical, rehabilitative, vocational and family supports that aim to return disabled former military personnel to a productive post-service career. And, in terms of the monetary payouts, for soldiers in the lower ranks, the combination of the earnings-loss benefit plus the permanent impairment allowance and the supplement could add up to more than their military salary, the minister said. 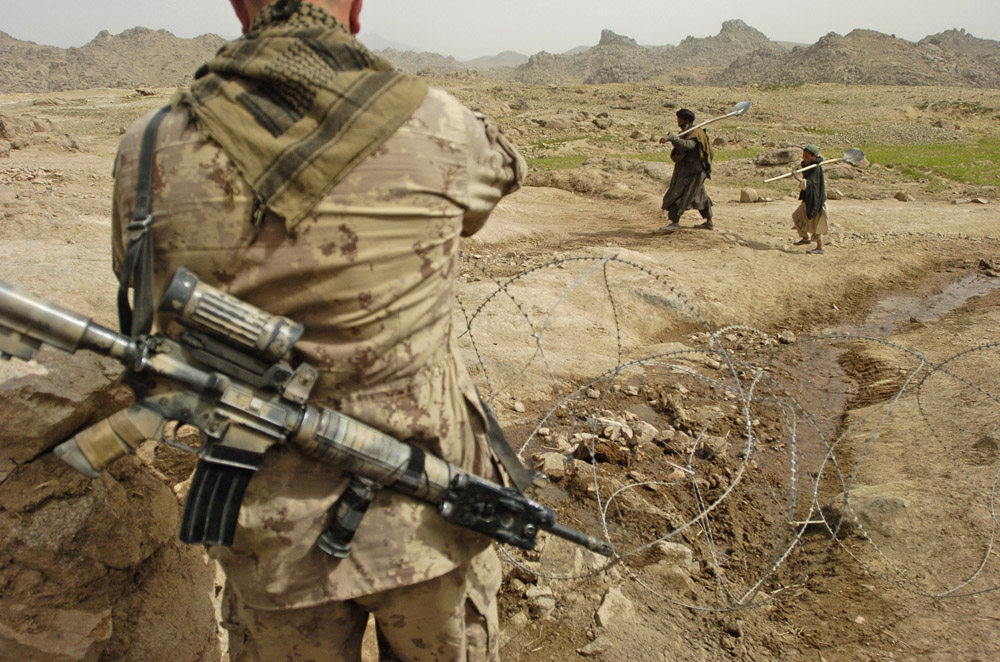 A Canadian soldier of the Princess Patricia's Canadian Light Infantry (PPCLI) 1st Battalion, A Company mans the gate at the Gombad safe house in the district of Sha Wali Kot in Kandahar province, Afghanistan, as two local Afghans walk by the main road in Gombad carrying shovels. (Louie Palu/The Globe and Mail)

The government has spent at least $700,000 fighting a court case against a group of veterans based in British Columbia who argue that the New Veterans Charter violates the Charter of Rights and Freedoms because it does not provide the same level of benefits and support as the system of lifelong pensions it replaced.

Frank Valeriote, the Veterans Affairs critic for the Liberals, said the comparison with other countries “just adds more fuel to the fire of the argument that our veterans have been making and that is that [the benefits] are inaccessible, insufficient and inadequate.”

Peter Stoffer, the NDP critic, said looking at what other nations provide to disabled veterans is a bit of comparing apples to oranges, but “for those who qualify, there is no question that other countries do better than ours when it comes to cash outlay.”