Mr. Bernier is taking a political risk breaking rank with Prime Minister Stephen Harper, cabinet ministers and the rest of the Conservative caucus in Quebec, who spoke positively this week about the $400-million project.

While his position might cost him support in his riding of Beauce, south of Quebec City, Mr. Bernier is hoping that his stand will boost his profile across Canada as a fiscal conservative and a potential leader of the Conservative Party.

"The project is simply not profitable and will constitute a financial burden for taxpayers for decades to come, even in the best scenario," Mr. Bernier said in a long critique posted on his personal blog on Friday.

Mr. Bernier said he supports the return of an NHL team to the provincial capital, but he has decided to side with ordinary Canadians and community leaders who reject subsidies for professional sports.

"It's nice to have dreams, but when you use borrowed money to achieve them and act as if money grows on trees, you may have a brutal awakening," he said.

Mr. Bernier resigned as foreign affairs minister in 2008 after revelations that confidential briefing notes had ended up in the hands of his one-time girlfriend, Julie Couillard. After being re-elected with another strong majority later that year, the Conservative MP has been giving speeches across the country, calling for smaller government at every stop.

In his statement, Mr. Bernier said he was not impressed by an Ernst & Young study that found that a new Colisée would be feasible as long as the three levels of government paid all construction and renovation bills over 40 years. The Quebec government is proposing to pitch in 45 per cent of the cost if Ottawa provides matching funds, with Quebec City paying the remaining 10 per cent.

Mr. Bernier condemned the project as politically divisive, as several Quebec City residents are saying that other Canadian cities have received funding for projects over the years and that now it is Quebec's turn.

"Since our governments have been throwing money in all directions for decades, there is obviously no way to refute such arguments," he said. "We cannot continue to pass on to our children the bills for all the projects that we cannot afford to pay ourselves."

A new arena is seen as essential to bring professional hockey back to Quebec City, which lost the Nordiques in 1995, and for a bid for the 2022 Olympic Winter Games.

Earlier this week, the majority of the 11 members of the Conservative Party's Quebec caucus wore Nordiques sweaters in a show of support for the project. The Prime Minister and his cabinet members added that they are open to financing the project as long as other cities are eligible for similar funds. Hoping to make it clear that Quebec would not be an exception, Ottawa has compiled a list of sporting infrastructures that have received federal funding, in cities such as Toronto, Moose Jaw, Calgary and Winnipeg.

"We intend to provide the same treatment to all and will be looking at the different options," said John Babcock, a spokesman for Transport Minister Chuck Strahl. "The present fiscal situation, and the need for prudent use of public money, will inform all of our discussions."

The Liberals and the Bloc Québécois have expressed support for the Quebec City project. Most of the Conservative Party's seats in Quebec are in and around the provincial capital. 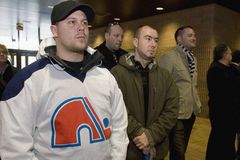 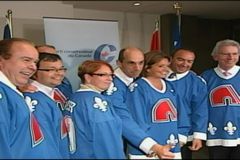