Former Canadian prime minister Brian Mulroney and the federal Liberal government are both trying to win the release of Xiao Jianhua, a detained Chinese-Canadian billionaire whose dramatic disappearance has thrust Ottawa into the high-stakes machinations of Communist Party power struggles.

A memo obtained by The Globe and Mail, sent from the law firm Norton Rose Fulbright to an intermediary representing Mr. Xiao's family, indicates that Mr. Mulroney is acting to win Mr. Xiao's release and has succeeded in pushing the file high on the Global Affairs' list of priorities.

"Specifically Minister Freeland and her Deputy Minister Ian Shugart … are now personally involved in the file, and the Prime Minister's office is engaged. Prime Minister Trudeau himself is aware of the situation," the memo reported.

Opinion: Why the crackdown in Hong Kong will backfire

Gerard Li, the intermediary representing Mr. Xiao's family, did not respond to a request for comment.

In recent months, Mr. Mulroney has worked closely with the Trudeau government in cementing a relationship with the Trump administration.

Mr. Trudeau's apparent knowledge also speaks to the complexities of the case for a leader who has sought warmer relations with China, but must weigh the risks of provoking Beijing's anger if he publicly speaks out in support of a polarizing billionaire with ties to some of the country's most powerful people.

On Jan. 27, Mr. Xiao vanished from the hotel lobby of Hong Kong's Four Seasons Hotel and was reportedly spirited away in a wheelchair by a phalanx of plainclothes policemen. His head covered with a blanket on the way out, Mr. Xiao was subsequently whisked across the border onto the mainland.

The abduction demonstrated how badly Beijing wanted Mr. Xiao in its custody. Hong Kong is a semi-autonomous region, and regardless of its putative legal independence, Chinese policemen apparently crossed the border and collared him.

While Mr. Xiao's allies depict him as shrewd capitalist whose connections to power made him wealthy, detractors see him a a stand-in for institutional corruption. A former computer-parts reseller, Mr. Xiao built a reputation for handling the finances of Beijing's princelings and potentates and amassed an empire that made him worth at least $6-billion (U.S.), making him one of the country's wealthiest men.

The question is what political and diplomatic measures Ottawa would be willing to take to demand favourable treatment for Mr. Xiao, whose controversial profile in his former homeland does not extend to his adopted country, where he has had citizenship for around a decade. His primary residence was in the Hong Kong Four Seasons, and Mr. Xiao also has a diplomatic passport from Antigua and Barbuda, which conferred on him the title of "Ambassador-at-Large."

Global Affairs acknowledged the case and said that consular officials are in contact with the authorities to gather additional information and provide assistance.

Mr. Mulroney's executive assistant said the former prime minister was out of the country and, citing his firm's policy, said he could not comment. The lobbying for his release comes at an especially delicate juncture in Sino-Canadian relations, as the countries begin exploratory talks toward a free-trade agreement and pursue closer ties.

"Minister Freeland acknowledged the sensitivity of the [Xiao] issue as the government 'has a lot invested' in trade negotiations which are just about to begin with China," said the memo.

Historically there appeared to be a quid pro quo in high-level negotiations to resolve cases of Canadians held by China. Last September, for example, Ottawa agreed to pursue a controversial extradition treaty that Beijing requested. The next day, Canadian Kevin Garratt, detained by the Chinese government for more than two years on unproven charges of spying, was allowed to return home. Mr. Trudeau had personally sought the release of Mr. Garratt, who with his family had done missionary work in China over three decades.

But the Trudeau government is likely to face a much more hostile response if it pressures China to release Mr. Xiao, whose abduction comes during a time of intense political intrigue in China's ruling Communist Party. This fall, the party will meet for a twice-a-decade congress to select the next generation of elite leadership, and the lead-up to the meetings is a time of heated manoeuvring.

Chinese President Xi Jinping and his supporters appear to covet Mr. Xiao "because he is in control of incriminating evidence against political enemies of Xi Jinping," said Willy Lam, a Hong Kong-based expert in Chinese elite politics. "This being the case, the risks for the Canadian government in jeopardizing a relationship with China would be much higher, because this is a fairly sensitive political case," he said.

Beijing could even deny Canada basic consular access to Mr. Xiao if it deems him Chinese. Unlike Canada, China does not recognize dual citizenship and refuses requests from foreign governments in cases where Chinese-born people have not formally relinquished their passport or used their Chinese documents to enter China.

The PMO did not respond to a request for comment.

The Xiao file also portends future tensions over the value of Canadian citizenship and Ottawa's willingness to co-operate with Beijing in its far-reaching, so-called anti-corruption campaign. Canada wants to ensure that the return of fugitives is "done under rule of law," said Guy Saint-Jacques, who until last fall was Canada's ambassador to China. "If you have China going around abducting people left and right, well, what does it say about playing by the rules?"

Ottawa has little choice but to respond in some way, Mr. Saint-Jacques said. "What will concern the government is the fact that if this happened to one Canadian of Chinese origin, it could happen to others. Therefore you want to send a signal that you cannot tolerate this," he said.

When asked about how the Xiao case might inform Canada's dialogue with China on extradition, Global Affairs said in an e-mail that Canada's commitment to human rights, rule of law, and due process is paramount.

But it makes little sense for the prime minister to publicly champion the cause of a "very murky financier involved in all kinds of very complicated transactions. You have to stand for his rights, but you have to be careful in how you move," said Yves Tiberghien, director of the Institute of Asian Research at the University of British Columbia.

Gaining clarity on Mr. Xiao and the business he conducted may be a tough assignment, given the low profile he kept even among old friends.

A son of a farmer, Mr. Xiao entered the prestigious Peking University at the age of 14 in the late 1980s, allowing him to rub shoulders with the children of the country's elite. Mr. Xiao was head of the school's official student organization and stayed loyal to the government during the pro-democracy demonstrations in 1989.

"He is a very smart guy and I know he has very good connections with many powerful people," said Zhou Chunsheng, who tutored Mr. Xiao in math while he was a student at Peking University.

The two remained in contact for many years, but Mr. Zhou said his former student was never open about his affairs. "He made a good effort to keep many things secret. This is his style," added Mr. Zhou, a Princeton graduate and professor of finance at Cheung Kong Graduate School of Business.

Mr. Zhou said he was not surprised to hear about Mr. Xiao's arrest. "He is a rich person, but his business model is very different from people like [Alibaba Group founder] Jack Ma. Basically, he made most of his wealth from the capital markets in China," Mr. Zhou said. It's a "disputable" model, he added, one that exposed Mr. Xiao to strict rules on market manipulation and insider trading. 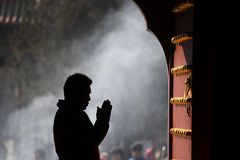