The federal government will release a budget this week that promises both stimulus and restraint - a conflicting message for a conflicted time, with Canada emerging, but not yet fully released from the grips of a major economic downturn.

In 1995, the problem was a little bit more clear-cut. The deficit was the issue, full stop. And the man chosen by then finance minister Paul Martin to rein it in was Peter Nicholson, an economics guru and senior vice-president at the Bank of Nova Scotia.

The result was a budget that imposed steep spending cuts and tax hikes (though not on income) with the aim of cutting the deficit by $13.6-billion over two years. Today, Mr. Nicholson talks about what it was like to craft a budget during those difficult economic times.

What was the atmosphere like in the lead-up to the 1995 budget, when you knew that there was going to have to be some serious restraint?

The government - and I am thinking here principally of Paul Martin, the finance minister, and [Jean]Chrétien, who was prime minister at the time - had come to realize that halfway measures weren't going to work and that this was going to have to be a significant departure from the way that budgets had been made in the past because the country was really in peril. So there was a great sense of crisis and it was a sense that was shared as much by the public as by the minister of finance and the prime minister.

Was there anything that finally tipped the balance and made the government realize that restraint was the way it had to go? Was there a seminal moment?

There was an editorial in The Wall Street Journal that referred to the Canadian dollar as the northern peso, which was sufficiently colourful and it attracted a great deal of attention of the public and the people who were responsible for that. Closer to the event, there was a significant financial crisis in Mexico and that also, I think, brought it home in a fairly tangible way what can happen to a country when the capital markets decide to desert you. ...

After the budget had been put together and you knew what Canadians were about to hear - knowing that it was not going to be all hearts and flowers - was there anything that you were particularly worried about?

Yes, oddly enough, one was at that time certainly less worried about the popular reaction on the street directly to the measures, but rather how were financial markets and how were the economists who were quoted in The Globe and Mail and other broadcast media going to view it. Because we were convinced that the public would take their queue from the financial experts and the financial media.

At what point did you decide whether you had succeeded?

I was confident that it was a win in the budget lockup. As we were explaining it to the financial reporters, it became very clear to me that they were really pleasantly surprised with what had happened and that we had exceeded their expectations.

Does the exercise that you went through 15 years ago make it easier for subsequent governments to introduce budgets that emphasize restraint?

I think that there was at that time a greater sense of urgency and crisis than now. I think one of the things that may create a little bit of undue complacency in the present environment is that we are looking at big deficits and probably ones that are going to continue even after the economy recovers, but when you look at the United States and [Britain].. you can see they are in vastly worse shape. So, in relative terms, Canada appears to be relatively better off. And I would stress the word relative. So that can perhaps induce some complacency. And that's dangerous because we learn from past painful experience that when the fiscal situation goes unaddressed, you wake up one morning and it's out of control. 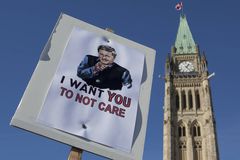 Can Canada afford to be healthy?
February 26, 2010
Follow Gloria Galloway on Twitter @glorgal
Report an error Editorial code of conduct
Due to technical reasons, we have temporarily removed commenting from our articles. We hope to have this fixed soon. Thank you for your patience. If you are looking to give feedback on our new site, please send it along to feedback@globeandmail.com. If you want to write a letter to the editor, please forward to letters@globeandmail.com.
Comments