Fresh off a groundbreaking election that saw the city elect its first Muslim mayor, Calgary was buzzing Tuesday morning over the come-from-behind win of Naheed Nenshi.

"I didn't think that the voters of Calgary are so open-minded," said a smiling Jorjete Bojanova, 45. "The win says that Calgary needs an international visionary, a person with a lot of interesting ideas, different experience, and a new way."

Mr. Nenshi, 38, won after capturing broad support in Calgary, including a large number of youth. He beat alderman Ric McIver, who was the safe bet to win, and former CTV anchor Barb Higgins.

"I saw a lot of parallels between his campaign and Obama's campaign. He was mobilizing youth, which McIver and Higgins were not focusing on," said Ashif Murani, 44, a Calgary lawyer. "I think he's just really got good, solid credentials. Whether that can now get conveyed into policy decision making where he gets support of the council, that remains to be seen. It's like Obama - good ideas, but can you implement them?"

Supporters of other candidates were disappointed, but anxious to see what Mr. Nenshi could do.

"I'm disappointed Barb didn't win," says Kaley Harrison, 19, who added she liked Ms. Higgins' values and wanted to see Calgary elect its first female mayor. Despite the loss, she feels Calgary would still be ready for another first, after Mr. Nenshi, its first visible minority and Muslim in the mayor's office (though Mr. Nenshi did not mention his faith or heritage often on the campaign trail).

"I think that women have a lot of potential these days and have a lot of backbone and a lot of support still - no matter if Barb won or lost," Ms. Harrison said.

Mr. Nenshi finished with 40 per cent of the vote, as turnout spiked to roughly 50 per cent - a figure rarely seen in municipal politics. Mr. McIver received 32 per cent, and Ms. Higgins earned 26 per cent.

"Today Calgary is a different place than it was yesterday. A better place," Mr. Nenshi said in a speech to his supporters Monday night.

His win proves that the Internet is a key tool in politics and does indeed deliver support – Mr. Nenshi had far more Facebook friends than either of his main competitors, who themselves dismissed that support, saying it wouldn't translate into actual votes.

The prospect of Mr. Nenshi as mayor signalled a shift in the province, observers said. "Calgary is often misperceived. It's no longer a ranching and oil community only. It's young, it's vibrant, it's cosmopolitan and global," said David Taras, a veteran political observer in the city and the Ralph Klein Chair in Media Studies at Mount Royal University.

Watching the returns of Mr. McIver closely were Stephen Harper's Conservatives. The party's veteran campaign duo of Sam Armstrong and Devin Iversen led Mr. McIver's push. Along with Rob Anders, they're credited as being experts in "deep mining" polling – identifying a conservative base, finding wedge issues, and driving those people to the polls. Mr. Harper congratulated Mr. Nenshi Tuesday morning, but his party's tried-and-tested approach was simply washed away by the broad coalition mobilized by Mr. Nenshi, who nevertheless congratulated his two rivals.

Mr. Nenshi was joined by his family – a sister, her husband, two children and his parents – with whom he is very close. He is a success story for new Canadians. Mr. Nenshi's parents emigrated to Canada from Tanzania when his mother, Nury Nenshi, was pregnant with Naheed. They settled in Toronto before moving to Calgary, where Naheed grew up. He attended Harvard University, and at the tender age of 22 was hired by McKinsey and Company, one of the world's top consulting firms. After about eight years at the company, he returned to Calgary to be with his ailing father. He has since worked for the United Nations, started his own business, and became a professor at Mount Royal University. He was a frequent commentator and columnist with a keen eye on civic affairs; this spring, he decided to throw his hat in.

"You know, the Purple Army was never about winning an election – it's a good thing. It was about revitalizing the level of conversation in the city. It was about talking to the person next to you on the bus, it was about taking an extra minute with the cashier at Safeway, and now it is about doing the work to build a better Calgary that we all dream of," Mr. Nenshi told his supporters Monday night.

"His ability to connect and win volunteers, I mean, his ranking on the charisma index is probably 10 out of 10. He's very articulate, he showed a deep knowledge of policy, and he had a vision for the city," Prof. Taras said. "I think this is a city of change, but it's a cosmopolitan city. It's a younger, more cosmopolitan, more progressive face than people are used to thinking about Calgary. When people think about Calgary they don't tend to think of it as a cosmopolitan city." 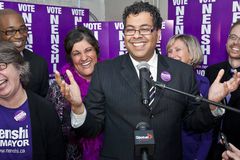 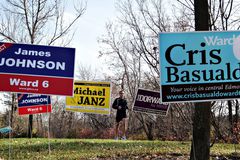 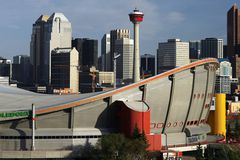