A veteran TV cameraman will be allowed to travel to Malaysia with the Prime Minister this week after all.

The TV networks fought back, insisting that they – not the Prime Minister's Office – should decide who to assign to cover Harper when he travels abroad.

Shortly after news of the dispute became public, however, Jason MacDonald, a spokesman for the Prime Minister, said no accredited journalist would be prevented from boarding Harper's plane.

During an event last week in New York, Ellis asked Harper about the charges laid against then-Conservative MP Dean Del Mastro, even though reporters and photographers had been told questions were not allowed.

Harper leaves Thursday for a seven-day trip to Malaysia and Indonesia, and CTV had Ellis accredited to work on the assignment as a pool cameraman.

But following Ellis's New York assignment, CTV said it was told by the PMO that Ellis would not be allowed on Harper's plane, even though he had earlier been approved for the trip.

That has apparently changed. "No one has been barred from this trip," MacDonald said.

CTV News spokesman Matthew Garrow said earlier Wednesday the network had nevertheless decided to send Ellis to the Ottawa airport to try to board the Prime Minister's plane with other journalists, and that other networks were backing that decision.

All media pay full price for their transportation and lodging when travelling with the Prime Minister.

MacDonald had earlier said that CTV would be allowed to travel with Harper, but would not say specifically whether Ellis would be turned away, despite repeated requests for clarification.

"No accredited Canadian media outlet is prevented from joining us for the upcoming trip to the Asia Pacific Economic Co-operation Summit," MacDonald said in an e-mail.

"To suggest otherwise is absolutely false."

Other network members of the travelling TV pool indicated they support the CTV decision to send a cameraman who might be turned away.

"To us, it's a very slippery slope to let the Prime Minister decide who gets on that plane and who doesn't," said one member of the pool who didn't want to be identified.

"That's why we are comfortable with CTV insisting that Dave gets to go. It's a question of principle."

In recent years, the three main networks – CBC, CTV and Global – have pooled resources on prime ministerial trips in order to cut costs.

Each network sends its own reporter but takes turns sending camera operators, editors and technicians. And each time, the network responsible for the pool decides which people to send, without interference from their competitors.

In Britain and Australia, there are no restrictions on asking prime ministers questions during photo ops where reporters are present.

When Harper came to power in 2006, he initiated stricter rules prohibiting journalists from posing questions at photo ops, both in Canada and abroad.

When pressing news breaks, those rules have occasionally been broken.

It's also not the first time that the PMO has tried to dictate who can or cannot travel with the prime minister.

Canadian Press reporter Alex Panetta was told by former Harper communications staff in 2006 he would not be able to board a plane with Harper for a clandestine trip to Afghanistan after Panetta wrote that the PM was to make the visit.

Panetta ended up going on the trip – and having a private chat with Harper about politics and hockey on a return flight from Pakistan.

Last Thursday, Ellis asked one question shortly after hearing that Del Mastro had been charged by Elections Canada with several offences related to the 2008 federal election campaign.

"Any comment today, sir, about Dean Del Mastro being charged?" he asked as the photo op was ending.

The Prime Minister didn't respond to the question and all of the journalists taking part were shuffled out of the room without incident.

Del Mastro, the MP for Peterborough, Ont., is facing four charges in connection with allegations that he exceeded his campaign spending limit and filed a false accounting of the expenses incurred to win office.

While the accusations have not been proven in court, Del Mastro resigned from the Conservative caucus and was stripped of his duties as a parliamentary secretary.

The charges are a fresh ethics embarrassment for Harper as he struggles to move beyond the Senate expenses scandal in time for a fall sitting of Parliament that begins in two weeks. 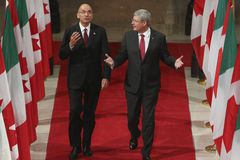 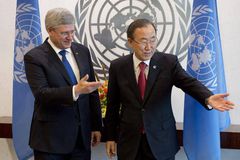 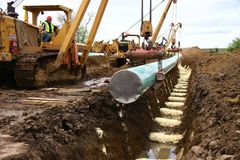