Now that the ugly deed is done, it might be time to wonder whether it mattered at all. The data – for those who care about such trifles – certainly makes you wonder.

The old CCF, predecessor of the NDP, had three leaders during its 29 years, who contested seven general elections. Neither came close to winning 20 per cent of the vote. When the CCF received less than 10 per cent in the Diefenbaker sweep of 1958, it was time to replace it with the New Democratic Party. Now it's time to redefine the "new."

High expectations for the newborn NDP were soon cruelly dashed. Under its seven leaders since 1961, only twice did the NDP receive as much as 20 per cent of the vote – first Ed Broadbent in 1988, 20 per cent on the button, then Jack Layton in 2011 with 30 per cent, the great breakthrough party devotees had long dreamed of.

Yet even le bon Jack took four elections before the NDP became the official opposition for the first time ever. Until then, Jack never surpassed 18 per cent. What magic was at work four years ago in transforming Jack Layton into le bon Jack no one yet really knows.

Alas, Tom Mulcair sent Jack's 30 per cent back to the more typical 19 per cent – an unforgivable disaster in the eyes of most New Democrats. Of course we'll never know, but this short history suggests that perhaps no one could have done better.

Two points need to be made. First, over the decades many of these CCF/NDP leaders won extremely high personal reputations. No one doubted the integrity and honour of the CCF's J. S. Woodsworth and M. J. Coldwell. But it didn't help at the ballot box. The first leader of the NDP, their successor, was none other than the beloved Tommy Douglas himself. But Tommy got nowhere electorally and was replaced by David Lewis. Lewis, too often neglected now, was universally respected for his obvious brilliance and devotion to the ideals of democratic socialism, which no one ever articulated better. In two elections David did not win 18 per cent support. Then came Ed Broadbent, who did get 20 per cent once and was the most popular politician in Canada for some years – except at election time.

It became a cliché about Tommy, David and Ed that had they been leading one of the other parties, they would have swept the country. Everybody, but everybody, would have voted for them. But of course their being New Democrats was the essence of their being.

After Ed, decline was followed by collapse. Under Audrey McLaughlin and Alexa McDonough the party returned to embarrassing levels, twice under 10 per cent. So when Jack Layton, in his first campaign, won 15 per cent, it seemed like a major success though it was in fact deeply disappointing.

Here's the second key point: Each of these leaders had her own specific appeal and his own particular characteristics – Tommy the grassroots hero, David the peerless orator, Ed the academic with the common touch, gutsy Audrey, effervescent Alexa. Beyond that, recall that each of their campaigns was different in umpteen ways – the issues, the mood of the country, the party's program, its budget, its strategy, its organization. Add in now the different Liberal and Conservative leaders each faced, and the different strategies of each of these rivals.

Yet despite these endlessly different variables, and regardless who the leaders were, NDP support nationally almost always remained at 20 per cent or below, only once, in 2011, ever breaking out.

Isn't there a lesson here: that whoever the leader and whatever the circumstances, the large majority of Canadians have not bought whatever the NDP was selling? Doesn't it also logically mean that no other leader, and no better campaign strategy, would necessarily have given the NDP the victory it so deeply craved in last year's election? Doesn't it mean in general that despite Jack Layton's one thrilling advance, Canadians have never been ready, and remain unready today, to take the NDP seriously as a potential national government?

Why that should be true demands far more analysis, and how to overcome the public's misgivings demands the greatest amount of analysis possible. To give it credit, Mulcair's 2011 campaign tried to come to grips with this fundamental problem, but its strategy was badly miscalculated.

Some New Democrats, looking at the hard evidence, have accepted the party's role as the country's conscience and not its government. Their critics within the party suggest this meant somehow deliberately eschewing government, as if they chose not to win. That's just silly. The truth is that no CCF or NDP leader ever, not once since 1933, did anything but try to win as many seats as humanly possible. We know the results.

But what each did do, before Mulcair, was to steadfastly refuse to turn their party into one of the other parties. If Canadians want a moderate or conservative party, they know where to go. The NDP's not for them. But who's it for? For many years the answer was clear: new ideas, humane ideas, cutting-edge ideas, that their opponents often stole. Great. But beyond child care and pharmacare, what's to be stolen from the NDP's armoury today? On the biggest challenge of our era, extreme climate change, what side is the NDP even on?

For New Democrats, after Edmonton, there are many tough questions to answer. 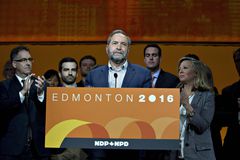