Canada has joined other Group of Seven leaders in pledging to stop burning fossil fuels by the end of the century, but Canadian officials are playing down the promise as an "aspirational" target and Stephen Harper says it will only be reached through advances in technology.

In their end-of-meeting statement, G7 leaders called for an end to fossil-fuel use by the global economy by 2100 as well as cuts to greenhouse-gas emissions by 2050 that lower them as much as 70 per cent from 2010 levels.

The G7 statement represents a watered-down goal from what German Chancellor Angela Merkel as host of the‎ summit had sought. Ms. Merkel had been pushing for a commitment to a low-carbon economy, or relatively light use of fossil fuels, by 2050.

A Western diplomat said European countries in the G7 went into the meeting looking for stronger language about moving to a global low-carbon economy, and it was Canada, a net exporter of energy, along with Japan, who wanted to push back the stated timelines for that ambition. In the end, one diplomat noted, the G7's final communiqué, which calls for decarbonisation of the global economy "over the course of this century," allows each country to put a different interpretation on whether that would happen nearer to 2050 or 2100. But the notion of decarbonisation, at least, was agreed upon.

Lutz Weischer, the team leader for international climate policy at Germanwatch, a non-government organization that advocates sustainable development, said, ultimately, Canada didn't want to be seen as "a one-country minority."

The Prime Minister's Office denied that Canada had been trying behind the scene to soften language and commitments on fighting climate change. "There was a consensus and Canada supported that outcome," PMO spokesman Stephen Lecce said.

By having the G7 leaders present a united front on climate, Ms. Merkel did achieve her goal to lay the groundwork for an international agreement on climate, to be discussed in Paris in December.

"Mindful of this goal … we emphasize that deep cuts in global greenhouse-gas emissions are required with a decarbonisation of the global economy over the course of this century," the leaders of the U.S., U.K., Germany, France, Japan, Italy and Canada said in a communiqué.

G7 member countries agreed to a goal of limiting the increase in global temperature to less than 2 degrees Celsius above pre-industrial levels.

For Mr. Harper, a politician from petroleum-rich Alberta, the pledge comes as a surprise, since it amounts to slapping to an expiry sticker on one of Canada's major economic drivers, including the oil sands. But these commitments impose no firm obligations on Mr. Harper's government in the short term and he said results will be achieved through technology, not economic sacrifice.

"I don't think we should fool ourselves. Nobody is going to start to shutdown their industries or turn off the lights," Mr. Harper told reporters after the G7 summit wrapped up in Germany's Bavarian Alps. "To achieve these kinds of milestones over the decades to come will require serious technological transformation," he said.

A senior Canadian government official tried to allay the impression that Mr. Harper had written off the oil patch, calling the G7 statement an "aspirational target" and repeating the Prime Minister's comments that it's up to technology to save the day.

In the oil sands, scores of companies have abandoned expansion projects in response to the sharp drop in commodity prices.

But others are pushing ahead with plans to substantially boost production for decades to come, confident that new technologies will offset more stringent environmental controls, should they be imposed on the sector.

They include Suncor Energy Inc., which is building a $13.5-billion oil sands mine it says will pump 180,000 barrels a day for 50 years, starting in 2017. Imperial Oil Ltd., a unit of U.S. oil giant Exxon Mobil Corp., plans to more than double output from an existing mine and says it could add some 4.7 billion barrels of new resource to its Alberta reserves by 2030.

"The challenge we all face is how to reduce [greenhouse-gas] emissions while global demand for energy is increasing and we transition to lower carbon energy over the next several decades," Tim McMillan, president and chief executive of the Canadian Association of Petroleum Producers, said in a statement. "While it is impossible to tie technological breakthroughs to a timetable, our industry is focused on technological innovation and have already reduced our GHG emissions per barrel by about 30 per cent since 1990."

Mr. Harper has long resisted ambitious action on climate change His government, for instance, promised to cut carbon emissions by 17 per cent from 2005 levels by 2020. But last fall, the federal government's commissioner of the environment warned there's growing evidence "the target will be missed."

David Mc‎Laughlin, the former head of the National Round Table on the Environment and the Economy, a federal environmental agency, said ‎the commitment to phase out fossil fuels is so far off it imposes no burden of responsibility on the Harper government. The Conservatives have not made sufficient investment in technological research to generate the breakthroughs that will be needed to move beyond fossil fuels, he said.

On climate change, necessity can be the mother of invention – with a little help
June 8, 2015 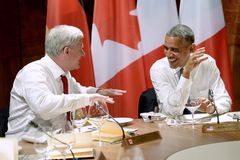 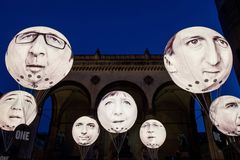 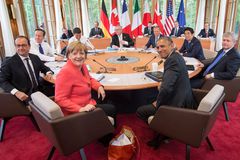