The prime minister, who's visiting India this week, drew upon the country's famous Hindi song-and-dance films to make his point in a major speech near the south Asian nation's capital.

Mr. Harper's message, directed at India and its leadership Wednesday, was this: Let's get closer.

Canada and India have only recently repaired the relationship damage that ensued after Ottawa banned nuclear to the south Asian country following a 1974 nuclear bomb test that relied on plutonium made by a Canadian-donated test reactor.

The two countries have also found progress slow in negotiating both a foreign investor protection agreement and a broader deal to liberalize two-way trade.

Mr. Harper asked India to try harder during his speech to the World Economic Forum in the city of Gurgaon Wednesday.

"You know, there is a kind of parallel to Canada and India and the typical Bollywood plot," he said.

"Two young people meet. They know they're meant for each other, but they have obstacles to overcome," the prime minister continued.

"Before the viewer loses interest, they do, in fact, overcome those obstacles and the happy ending ensues," he said.

"Ladies and gentlemen, that's a bit like how I see the relationship between Canada and India: we have had a very promising start but we have to work hard to overcome the obstacles, if we are to get to the happy ending we both want."

The prime minister told the World Economic Forum audience he was glad to have returned for a second trip to India.

"The first thing you realize is that one trip cannot possibly be enough to even scrape the surface of this large and fascinating country."

He talked up Canada's strengths, including its robust banks, low federal tax rates and relatively healthy economic growth for a Group of Eight nation.

He repeated an idea he first developed during a speech in Davos, Switzerland this past winter, that rich industrialized countries can easily lose their way if they are not prudent.

"The wealth of western economies is no more inevitable than the poverty of emerging ones," Mr. Harper said.

"As these last four years have revealed, the wealth we enjoy today is not inevitable – our standard of living will be based on – and only on – strong, growth-orientated policies and on getting the hard choices right.

He outlined Canada's aggressive strategy to sign new free trade deals around the world as a means of gaining preferential access to growing markets.

"Since our government came to office in 2006, we have successfully concluded foreign investment promotion and protection agreements with fourteen countries, that, of course, includes China," he said.

"We are negotiating with twelve more."

"Since 2006, Canada has also concluded new trade agreements with nine countries and has launched negotiations with over sixty others," the prime minister added.

He said he wants India and Canada to deepen their efforts to sign their own free trade agreement "I also believe we need to become closer partners more quickly," Mr. Harper said.

"In addition to my trips, there have been no less than twenty-two visits from Canadian ministers since 2006," the prime minister noted "Over 500 Canadian companies are now here, and hundreds more are making plans."

He reminded his largely Indian audience that Canada and India share a western tradition in their common heritage as former British colonies.

"We are inheritors of similar traditions and values," Mr. Harper said.

"We practise and esteem both the democracy and solidarity of our society and the rights and dignity of the individual."

He noted that the natural connections have greatly eased Indian migration to Canada to form a huge diaspora.

"Certainly they have made it easy for India's sons and daughters to integrate into Canadian life," he said.

"More than a million Canadians of Indian origin now live in Canada, more than three per cent of our entire population. They work hard, give back to their communities and make us proud. " Mr. Harper said more than 23,000 Indian students studied or conducted research at Canadian schools last year.

"I place great importance on these people-to-people links," he said.

"They are, and will be, a living bridge between our two great countries, a bridge of increasing span, and growing significance."

"Canada is a natural-resources powerhouse," he said.

Mr. Harper urged India's leadership not to be complacent about Canada.

"As I've said before, the untapped economic potential between us is massive and undeniable," he said.

"But, massive and undeniable as that potential is, it will not develop itself."

Canada and India concluded talks Tuesday on a deal that should allow the resumption of nuclear exports to the south Asian country – one example of progress that Ottawa is quick to note.

Negotiators also meet in Ottawa next week for a sixth round of talks on a comprehensive free trade deal with India – one where slow progress has left Canadians frustrated.

"The world is moving quickly; Canada and India must also," he said.

"On our side, we have been deepening trade and investment ties with the largest, most dynamic markets in the world, the United States, the European Union, Japan, China," Mr. Harper noted.

"We want India firmly in that list. But time and tide wait for no one."

Total annual two-way goods trade between Canada and India stands at slightly more than $5-billion – surprisingly small for commercial relations between two economies of this size. 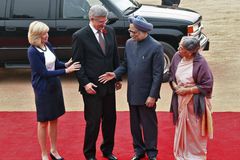 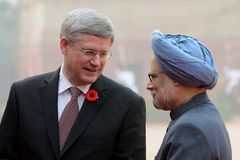 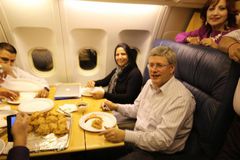 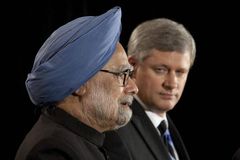 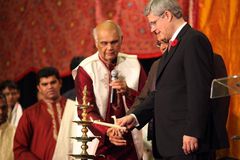 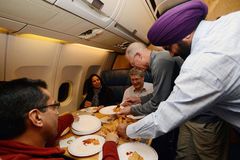 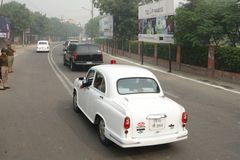 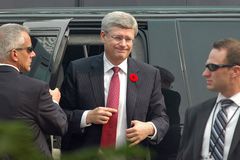