"Where is the army?" Just about every news report on Quebec's floods includes a struggling resident in knee-deep water asking why it took so long to call out the army, and why the soldiers aren't around.

But it's not the army's fault. It's the way disaster relief is organized in Canada: badly. The real question is why we keep doing it this way.

There are people rowing boats up streets in Gatineau and Pierrefonds, Que., and the army was dispatched during the weekend. In Constance Bay, Ont., locals ran out of sandbags and asked the feds to send more. It's far from the first natural disaster in Canada, whether you think of the Fort McMurray fires last year, ice storms nearly 20 years ago or the Calgary flood in 2013.

Read More: Floods in Quebec and beyond: What's the damage so far? A guide

Often, there's a similar pattern. Municipalities and first responders, such as police and fire departments, get overwhelmed; well-meaning volunteers pour out to help, but often don't know what to do; a small provincial emergency-response team tries to co-ordinate, but is overloaded; the army is called in, but it's late in the game, and they're thin on the ground.

If only there was a way of getting trained disaster-relief responders all over the country, who would make preparations, then spring quickly into action, armed with expertise and some equipment, and willing do the work at little cost.

In Germany, a big flood brings out volunteers from the Technisches Hilfswerk, or THW, in yellow hardhats, operating pumps, organizing sandbag dikes and co-ordinating. They're trained, some with certified expertise. There are 84,000 of them. It turns out there are many people who want to help their fellow citizens when things get tough. Other countries have something like it, too. Eva Cohen, a German-Canadian and former THW volunteer, has tried to interest Canadian governments in creating something like it. No luck so far.

When the floods hit Gatineau, not far from her home, she joined roughly 1,500 volunteers who turned out to fill sandbags. It was heartening to see well-meaning volunteers come out in droves, she said, but upsetting that it was chaotic, as many volunteers didn't really know how to fill bags and the effort at one point ran out of sand. The army, she said, is "coming in as a last resort, when municipalities are overwhelmed."

If you listened to Public Safety Minister Ralph Goodale speak to reporters on Monday, you'd realize everyone did what they were supposed to. Quebec Public Safety Minister Martin Coiteux asked him on Friday to send in the army and Mr. Goodale immediately agreed. But Mr. Coiteux didn't call for the army until things got bad – after all, the army is there for wars and massive disasters. It's scattered across the country. And it's expensive to deploy.

What could a volunteer civil-protection agency do differently? They'd be in communities all over the country. They'd bring structure to civil protection.

Civil-protection volunteers would have seen the possibility of flooding in March, after a big snow melt, and have started preparations, Ms. Cohen said. When they realized things might get critical, they'd mobilize volunteers. They'd prepare structures to redirect water. If they had high-capacity pumps and know-how, they could reduce the water damage. They could co-ordinate and provide outdoor lighting for all-night sandbagging.

But now, by the time the army deploys, as it did Quebec, it's too late to have as much impact, Ms. Cohen said.

You can't eliminate disasters, but you can plan and mitigate the impact. There are floods, earthquakes, ice storms, broken dams, power outages and so on. In Germany, THW volunteers do co-ordination, water purification, power-line repair, pumping, sandbagging, and search and rescue.

Why hasn't Canada done something like it? It takes a relatively small amount of money, for some equipment and training and a government mandate. On Monday, Mr. Goodale responded to questions about whether it takes too long to deploy the army by saying he will talk to his provincial counterparts this summer about revamping emergency response. A volunteer organization, he said, might be something to discuss. Let's hope those ministers don't forget once this disaster passes. Because there will be another one. 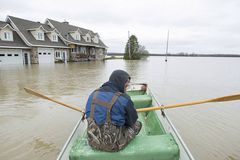 One dead in floods as Quebec, Ontario residents question government response
May 8, 2017
Follow Campbell Clark on Twitter @camrclark
Report an error Editorial code of conduct
Due to technical reasons, we have temporarily removed commenting from our articles. We hope to have this fixed soon. Thank you for your patience. If you are looking to give feedback on our new site, please send it along to feedback@globeandmail.com. If you want to write a letter to the editor, please forward to letters@globeandmail.com.
Comments