Canada could lead a regional effort to address the crisis in Venezuela, according to sources with knowledge of the diplomatic efforts in the South American country.

Earlier this week, Peru's Foreign Minister Ricardo Luna publicly floated the idea of Justin Trudeau acting as a mediator for the Venezuelan crisis, citing the Prime Minister's "global power role," according to reports out of the country. The proposal comes after Peruvian President Pedro Pablo Kuczynski recommended an international arbitration process to preserve democracy and avoid a "bloodbath" and refugee crisis in Venezuela.

Speaking to The Globe and Mail on the basis of anonymity, a veteran conflict mediator with knowledge of the diplomatic talks in Caracas confirmed that Canada is being considered to chair a contact group of governments to facilitate a negotiated settlement in Venezuela.

More than 70 people have died in 12 weeks of street protests across the country, which began after Venezuelan President Nicolas Maduro attempted to strip the opposition-dominated Congress of its powers.

A Canadian government source said a contact group is one possible option but added that Canada hasn't been formally asked to lead one.

The Maduro government characterizes the country's crisis as the result of an international right-wing-led economic war and as a fiction created by opposition-led media. And while the country is desperately short of food and essential medicines, with inflation running at more than 700 per cent, some hardliners in the Maduro government appear to believe they can continue to hold out. The government sold $2.8-billion (U.S.) in bonds to Goldman Sachs in late May, and is still exporting oil. But the problem is becoming increasingly regional in nature; 150 Venezuelans a day are seeking asylum in Brazil alone and an estimated 550,000 are living undocumented in Colombia.

"When you have a situation where Venezuela not only has not agreed to this but in fact rejects it … then I don't know how helpful such an initiative would be able to be – however much, I agree with the notion of the Foreign Minister and President of Peru that Trudeau at this point is seen as someone who can have a global role and can be an effective mediator," Mr. Cotler said.

Mr. Lopez's wife Lilian Tintori, who recently met with Mr. Trudeau in Ottawa to discuss the crisis in Venezuela, noted that the Vatican has already attempted to facilitate arbitration, without success.

"In an ideal situation I would think this is a great idea, but the truth is that you need two parties to make things happen, and the government of Maduro has shown very little will to proceed forward with any serious dialogue," Ms. Tintori said in an e-mail.

But there might be a role for Canada in a mediation effort that does not include Venezuela.

The Caracas-based diplomat noted that there is a precedent for the creation of a regional process to address Venezuela's crisis even without the Maduro government being involved. In the early 1980s, the foreign ministers of Venezuela, Mexico, Panama and Colombia set up what became known as the Contadora Group to address the civil wars in Central America, which threatened to destabilize the region. The Central American governments initially refused to participate, but the Contadora Group ultimately played a key role in ending those wars.

Foreign Affairs Minister Chrystia Freeland's office said that Canada is prepared to play a role in solving the Venezuelan crisis, but did not get into specifics. Ms. Freeland participated in an Organization of American States (OAS) meeting on Venezuela in Washington in May and will attend the organization's general assembly next week in Cancun, Mexico, where the Venezuela situation will be an urgent issue.

The diplomat said that when Mr. Trudeau was elected, the Maduro government thought it might find new sympathy in Ottawa because of the Prime Minister's left-of-centre politics and his father Pierre Elliott Trudeau's personal relationship with the late Cuban leader Fidel Castro. Mr. Castro was a major influence on Hugo Chavez, the architect of Venezuela's shift to socialism and, the opposition argues, of the current crisis (Havana continues to have leverage on events in Venezuela). But two years into Mr. Trudeau's tenure as Prime Minister, Venezuela understands that Canada views the situation in the country through a human rights and democracy lens, he said.

Following Mr. Trudeau's meeting with Ms. Tintori in Ottawa last month, the Prime Minister called on the Venezuelan government to "restore the constitutional ‎order, including the release of all political prisoners and to set an electoral calendar without delay." He also stressed the need to respect democracy and human rights, including through a resolution co-sponsored by Canada at the OAS in April.

While the people of Venezuela suffer, its president paints a rosy picture
June 9, 2017 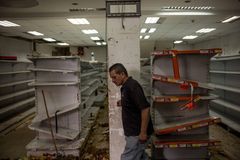 Follow Michelle Carbert and Stephanie Nolen on Twitter @michellecarbert @snolen
Report an error Editorial code of conduct
Due to technical reasons, we have temporarily removed commenting from our articles. We hope to have this fixed soon. Thank you for your patience. If you are looking to give feedback on our new site, please send it along to feedback@globeandmail.com. If you want to write a letter to the editor, please forward to letters@globeandmail.com.
Comments