Just one day before last month's elementary-school killings in Newtown, Conn., Canada offered its gun merchants "new market opportunities" to export banned assault weapons to Colombia, one of the world's most violent countries.

That opened the door for Canadian gun merchants to sell fully automatic weapons with high-capacity magazines – banned in Canada – to Colombia.

"Colombia's addition to the AFCCL opens new market opportunities by providing residents of Canada with the opportunity to explore and compete for contracts in Colombia for items controlled under the AFCCL," says a government notice posted Tuesday.

The amended order places restrictions on the permits required for the weapons exports, including a case-by-case review by the federal government.

The notice says that Canadian weapons exporters will face "very strict controls" under the Export and Import Permits Act before they will be allowed to export "prohibited weapons and prohibited devices (as defined in the Criminal Code of Canada), examples of which include fully automatic firearms, electric stun guns and large-capacity magazines."

The change went into effect on Dec. 13, one day before a gunman walked into Sandy Hook Elementary School and killed 20 first-graders and six school employees, sparking fresh debate about gun control in the United States.

Canada recently completed a controversial free-trade deal with Colombia, which has been plagued by a half-century-long guerilla insurgency, serious human-rights abuses and its emergence as a world-leading cocaine producer.

Colombia is gradually overcoming its violent legacy, becoming relatively more peaceful, while developing one of the fastest growing economies in the Americas.

The Harper government's pursuit of a free trade deal with Colombia was opposed by human-rights groups, but the deal was ultimately approved in 2011.

Now, Colombia has been added to a list that includes Canada's 27 NATO allies – along with Australia, Finland, New Zealand, Saudi Arabia, Sweden and Botswana – where prohibited firearms manufactured in this country may be sold.

"The amendment to the AFCCL will formally add Colombia to the list of countries that the Governor in Council deems appropriate to export prohibited firearms, prohibited weapons and prohibited devices and to which the Minister of Foreign Affairs may issue an export permit for such items," the notice says.

"The inclusion of Colombia on the AFCCL does not guarantee that a permit will be issued for the export of these items and all applications will remain subject to the Government of Canada's case-by-case review process."

In October, Foreign Affairs, along with the Defence and Justice departments, conducted a public consultation over the Internet on the possibility of adding Colombia to the list.

There were three responses.

One favoured the addition of Colombia, while two were opposed.

The two objectors "cited concerns relating to the long-time armed conflict and human rights issues within Colombia as the reasons for their objection," says Tuesday's notice.

Foreign Affairs dismissed the objections after conducting an analysis.

"This consultation process included a review of multiple issues, including a review of potential human rights and existing conflicts issues," says the notice.

Canadian arms manufacturers will now be able to submit applications to export the banned weapons to Colombia.

The government notice says the amendment is "consistent with the aim of the AFCCL to promote transparency in the export and transfer of prohibited firearms, prohibited weapons and prohibited devices by making public that Canada will now consider export permit applications for the export of those items to Colombia."

Despite its impressive economic growth, Colombia continues to suffer from serious human-rights violations. For example, more union leaders are killed in Colombia than anywhere else.

The Colombian justice system is clogged with more than 1,700 cases involving extrajudicial executions that have claimed the lives of 3,000 people, most from the last decade.

The regulations would have required the sponsor of a gun show to notify local police and the chief firearms officer of the province before an event, and to ensure the security and safety of the location and the firearms.

The changes killed a set of rules that were introduced by the Liberals in 1998, but never came into force after years of consultations and deferrals.

Ingrid Betancourt on how Colombia can achieve a lasting peace
December 9, 2012 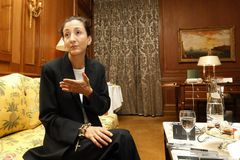 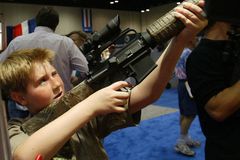 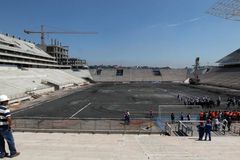 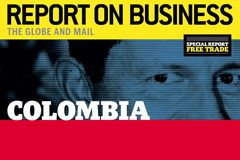