The Canada Revenue Agency has fired six employees in Montreal and suspended three others without pay as part of a growing scandal into allegations that the tax-collection agency was infiltrated by rogue personnel.

The controversy goes back to 2007, when information from a police investigation into the Mafia led the CRA to start looking into the activities of some of its employees. The government is releasing little information on the situation, in which millions of dollars in tax revenue are at stake.

The CRA first revealed allegations of infiltration last year when it fired two people who are accused of interfering in tax audits of construction companies.

This week, two construction companies pleaded guilty to committing $4-million in tax fraud by claiming non-deductible expenses such as the construction of a luxury yacht and jewellery purchases. The firms also submitted fake invoices from two shell companies that had benefited from inside help at the CRA, according to CRA and RCMP search warrants.

On Friday, the CRA revealed the growing scope of the review into the activities of its office in Montreal, suggesting that the matter goes beyond the construction industry.

"Since December 31, 2008, the Canada Revenue Agency has terminated the employment of six employees and suspended three employees without pay at the Montreal Tax Services Office for a variety of misconducts," said Erin Filliter, a spokeswoman for Revenue Minister Keith Ashfield.

"Any misconduct by CRA employees as alleged in these cases will not be tolerated. Our government is supportive of this investigation and will ensure that the CRA co-operates with all investigations," she said.

A federal source added the number of people involved in the alleged fraud might yet be higher, as investigators are also concerned about the activities of people who have retired from the CRA.

The controversy is fuelling calls for a public inquiry into the construction industry in Quebec. Premier Jean Charest has refused, saying it is up to police and other authorities to punish anyone involved in wrongdoing. But critics are charging that this week's guilty pleas by the construction firms prove that court cases won't help the public understand how the wrongdoing occurred or who actually benefited.

In the House of Commons on Friday, the Bloc Québécois said the recently exposed tax-evasion scheme was designed to provide large amounts of cash "to pay the personal expenses" of the administrators of the two construction firms that pleaded guilty, Simard-Beaudry Construction and Louisbourg Construction.

"Now that it has gone after the companies that belong to [construction magnate]Tony Accurso, will the Canada Revenue Agency start looking into those who benefited from this money?" Bloc MP Diane Bourgeois asked in the House.

Jacques Gourde, the parliamentary secretary to the minister of National Revenue, said that CRA employees must abide by a strict code of conduct.

"Our government is committed to protecting its fiscal revenues from those who do not want to respect their obligations," Mr. Gourde said.

The CRA has said that between 2005 and 2007, three of Mr. Accurso's companies "funnelled close to $4.5-million" to two shell companies that issued fake invoices. Earlier this year, the CRA laid tax-evasion charges against Frank Bruno, owner of construction firm B.T. Céramique, accusing him of providing the fake invoices.

Court documents allege that when tax auditors started closing in on Mr. Bruno, one of his cousins, who worked for the CRA, proposed a "plan of action" to keep them at bay. According to the documents, Mr. Bruno opened a bank account containing $1.7-million in 2006 in the Bahamas with two CRA employees, including his cousin Adriano Furgiuele.

In addition, court documents filed earlier this year show the CRA rejected more than $1-million in research and development tax credits that Simard-Beaudry and Louisbourg claimed in previous years. A search warrant said that Mr. Furgiuele's brother Marcello was involved in the alleged scheme as the head of the Delvex Consulting Group.

An earlier online version of this story contained incorrect figures released by the Canada Revenue Agency. This version has been corrected. 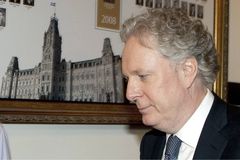