The RCMP is alleging in court documents that three Canada Revenue Agency employees participated in the launch of a Montreal company that helped construction firms avoid paying federal taxes.

In a search warrant, the RCMP is alleging that Revenue employees were linked to the Delvex Consulting Group, which helped companies prepare applications for allegedly "fraudulent" R&D tax credits.

The RCMP conducted a raid on July 29 at the Delvex offices, alleging that bureaucrats Americo Comparelli, Antonio Girardi and Adriano Furgiuele were "involved in Delvex," and that at least one of them was "paid by Delvex or someone else in this affair."

According to the court document, Delvex helped three construction firms – Construction Louisbourg Inc., Ventilex Inc. and B.T. Céramique – obtain almost $600,000 in tax credits in recent years, most of which were subsequently disallowed by Revenue Canada auditors.

The Delvex search warrant builds on years of investigations by Revenue Canada and the RCMP, which have made allegations of large-scale tax evasion by construction firms in Quebec, including companies owned by industry magnate Tony Accurso.

Mr. Accurso has been at the centre of a furor in Quebec over links between construction firms, government officials and union leaders, and he has been the subject of many headlines over his role in a controversial water-meter contract in Montreal.

The Charest government has taken a large hit in popular support by steadfastly refusing to launch a public inquiry into the matter, as requested by all opposition parties.

While at least two of the Revenue Canada employees have been let go as a result of the investigations, no charges have been laid by the RCMP, and none of the allegations have been proven in court.

The search warrant alleged that in e-mails, Delvex president Marcello Furgiuele, the brother of Revenue employee Adriano Furgiuele, talked with employees in construction firms about "boosting" and adjusting the number of hours spent on a contract to obtain larger tax credits.

"Significant time was spent brainstorming and trying to find a solution. It is our way of showing that the project is complex and a solution wasn't obvious," Marcello Furgiuele told Marco Accurso, a project manager at construction firm Simard-Beaudry, in 2008.

The search warrant does not specify whether Marco Accurso is related to Tony Accurso.

In addition, Revenue Canada alleged that Adriano Furgiuele helped falsify a tax audit on behalf of one of Mr. Bruno's companies, B.T. Céramique. Revenue Canada said that during a raid related to its B.T. Céramique investigation in 2008, it discovered that the firm's accountants had a "plan of action" that basically provided a step-by-step approach to stop a tax audit.

Revenue Canada alleged the action plan was written by and executed with the help of Adriano Furgiuele, who was the supervisor of an employee involved in doing the audit.

Another one of Mr. Bruno's firms, 3703436 Canada Inc., was a shell company that provided fake invoices to companies owned by Tony Accurso, according to Revenue Canada. The money paid to the numbered company was allegedly not declared, as the fake invoices included, among other things, invalid GST numbers.

According to a Revenue Canada search warrant, Adriano Furgiuele and Mr. Girardi of Revenue Canada's audit branch, as well as Mr. Bruno, had $1.7-million in an account at a bank in the Bahamas in 2006. After their banker was charged with money laundering by U.S. authorities, the trio are said to have travelled to Nassau and transferred the money to another institution in Switzerland.

Marcello Furgiuele refused to comment on the recent raid when reached on the phone, and others could not be reached for comment.

Probe urged into skewed awarding of construction contracts
May 19, 2010 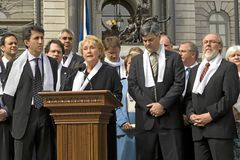