The Canadian government is deploying six CF-18 fighter jets to help NATO allies in Europe as the crisis in eastern Ukraine deepens.

It will also lend more military personnel to the alliance as it steps up patrols over the skies of eastern European NATO member countries. Prime Minister Harper announced the measures Thursday morning in Ottawa.

The fighters will operate out of Lask, Poland, and were are being sent in response to a request from NATO, Mr. Harper said.

The news came one day after NATO announced it would increase its presence in Eastern Europe by sending additional forces to former Soviet countries as part of a reassurance package for Ukraine. At least six NATO members, including the United States and Britain, said earlier this week that they would contribute fighter jets as part of the reassurance efforts, and NATO has increased air patrols over Eastern European member states in the past month.

NATO Secretary-General Anders Fogh Rasmussen said on Wednesday that the alliance has the resources it needs to bolster its presence in Eastern Europe and expected other NATO members to come forward with additional contributions.

Several Eastern European leaders had requested an increased military presence in the region amid concerns that Russian President Vladimir Putin could set his sights beyond Ukraine. Additional NATO deployments announced are aimed at "deterrence and de-escalation," Mr. Rasmussen said on Wednesday, adding that more would follow if necessary.

Mr. Harper said on Thursday that Canada is concerned about Russian "expansionism" in Ukraine. "I believe this to be a long-term, serious threat to global peace and security," Mr. Harper said, adding that Canada is prepared to help allies through NATO to counter Russia's actions.

Officials from the United States, European Union, Russia and Ukraine held talks in Geneva on Thursday in an effort to ease growing tensions in Eastern Ukraine, where pro-Russian separatists have taken control of government buildings in a number of cities. Speaking after the meetings, Russian Foreign Minister Sergey Lavrov said diplomats had agreed to establish a national dialogue to ensure that peoples' rights are protected. He added that pro-Russian protesters in eastern Ukraine would be granted amnesty unless they are found guilty of capital crimes.

Since the crisis in Ukraine began, Canada has imposed visa bans and sanctions on a number of Russian officials and recalled its ambassador to Moscow for consultations. Mr. Harper and Mr. Baird have publicly scolded Russia over its actions in Ukraine but had not until Thursday offered military assistance to the region.

Foreign Affairs Minister John Baird is expected to visit allies in the region next week, with stops in the Czech Republic, Slovakia, Poland, Latvia and Estonia.

"Canada remains steadfast in its support for Ukraine and will not stand idly by while its sovereignty and territorial integrity are threatened," Mr. Harper said in a written statement. "Together with our allies, we will continue to monitor events closely and take coordinated action to enhance Europe's security and show our support for the people of Ukraine."

Kiev must meet provocation with restraint 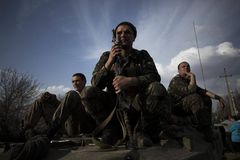 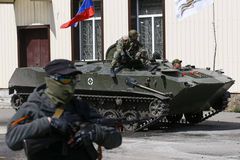