Defence Department documents obtained under federal Access to Information legislation show that at least $7.78-million was authorized for private security between April, 2008, and June, 2009, by the four senior military officers in Afghanistan who can approve contracts of up to $1-million.

Most countries that are part of the NATO-led coalition against the Taliban employ private firms and militias for routine but dangerous security jobs. In Kandahar, the Canadians have hired private guards to defend key installations such as the headquarters of the Provincial Reconstruction Team in Kandahar City, and other development efforts.

But they are not without controversy.

A recent report by the Center on International Co-operation in New York, which specifically cites the Canadian military's use of private security, said the absence of effective oversight of the hired guards undermines the credibility and effectiveness of both the Afghan government and the international troops.

In June, 41 Afghan members of a private militia employed by the United States killed the Kandahar police chief and five officers during a gun battle inside a government compound.

And in Iraq in 2007, private security guards employed by the U.S. security firm Blackwater Worldwide shot and killed at least 14 civilians in a crowded Baghdad square.

The company, now called Xe, is operating in Afghanistan, but it is unknown if it is employed by the Canadian military. The Defence Department will not divulge the names of the firms under contract for reasons of operational security.

The report by the Centre on International Co-operation said the Canadian Forces have hired defence services from Gul Agha Sherzai, the governor of Nangarhar province, who was once governor of Kandahar, as well as the militia of Colonel Haji Toorjan, a Sherzai ally.

Jeremy Sales, a Defence Department spokesman, said Tuesday that none of the firms employed by the Canadian military in Kandahar are used in an offensive capacity.

"They are integral to the security of Canadian personnel and enable the Canadian forces to focus their efforts on those duties where they provide the greatest value to the mission," Mr. Sales said. "All private security contractors employed by Canada are certified and registered by the Afghan government and are subject to the Afghan law."

Ujjal Dosanjh, the Liberal defence critic, said Canada must occasionally hire private guards because the number of Canadian soldiers on the ground in Afghanistan is limited.

"But I am worried that when you have security being outsourced by the military, it can lead to the Blackwater problems. There is a concern of accountability," Mr. Dosanjh said.

"Canadians want to know that whatever is being done in their name, particularly in Afghanistan, is being done appropriately. Canadians can have - and do have - trust in their armed forces. But I don't believe many Canadians would have trust in private security firms."

Defence Minister Peter MacKay, in 2007, gave authority to four officers in Afghanistan to approve contracts of up to $1-million, including private security.

"There is no question that sometimes matters are urgent when you are in the battlefield and you need to get things done quickly and you can't go through the rigmarole of the regular oversight," Mr. Dosanjh said. But "the Department of National Defence must assure Canadians that there is some oversight with respect to these contracts."

The documents on the military spending, obtained by Ottawa researcher Ken Rubin, show only those contracts worth more than $500,000. Many more payments of less than a half million dollars could have been made that were not included in the itemization.

Defence officials said it will be several days before they can respond to questions about the kinds of controls that are exerted over spending approved by officers in Afghanistan.

But giving senior military leaders signing authority for the goods and services they need in theatre is a long-standing practice, Mr. Sales said. U.S. officers in Afghanistan have similar spending capabilities.

As for the $1-million limit, he said, "I think there was a recognition in theatre that they needed higher authorities to do what they needed to do because this is a big operation." 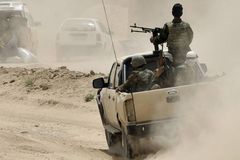 Opinion
A clean Afghan handover is a long way from reality
November 17, 2009