It's known as the "nudge unit," because its mission is to "nudge" citizens into acting the way the government wishes they would.

Pioneered in Britain, it is officially tagged with the 1984ish name Behavioural Insights Team – about a dozen policy wonks, mostly economists, who employ psychological research to subtly persuade people to pay their taxes on time, get off unemployment or insulate their attic. The goal: To make consumers act in their own best interests – and save the government loads of money.

Now Canada is looking into this growing field of behavioural economics. Finance Canada documents obtained by The Globe and Mail through Access to Information show Michael Horgan, the deputy minister of Finance Canada, was recently briefed on the activities of the three-year-old British team, which has attracted interest from governments around the world.

The Finance Department acknowledges there are potential ethical concerns when governments mix economics and psychology to nudge citizens into making specific choices, but concludes those concerns can be addressed with transparent policies. And there is a potential payoff: With an annual budget of just $1.6-million a year, officials say, the British unit has already saved its government $480-million. One project, which sent court fines by text message rather than by mail, dramatically reduced bailiff interventions and saved nearly $50-million.

The field of behavioural economics was popularized by the 2008 book Nudge: Improving decisions about health, wealth and happiness, by Richard Thaler and Cass Sunstein. The U.K. government called on Prof. Thaler, a behavioural science and economics professor at the University of Chicago, to help set up the nudge unit.

Prof. Thaler says he's not aware of any cause for concern in the way governments have used his theories to date. The key, he said, is to make sure they are nudging citizens in the right direction.

"I haven't even heard anybody make an accusation that anything the team [in the U.K.] has done is unethical or secret," he said in an interview, adding that he always writes "nudge for good" whenever asked to autograph his book. "There are people nudging you every day, and it's not the government. If you go into the supermarket, somebody's figured out the most profitable way of having you walk through the store."

Supporters view behavioural economics as a complement to classical economics, which assumes people make rational, well-informed decisions that are in their best interest. Behavioural economics argues there are exceptions: specifically, that people are biased toward choosing the status quo, can be altruistic in their decisions, are influenced by their peers, and will often choose a greater short-term gain even when that choice might be less beneficial over the long run.

Still, subtle changes can provoke strong reaction. New York Mayor Michael Bloomberg's attempt to ban the sale of super-sized sodas was a clear example of government policy tapping into behavioural economics in the name of social good. The mayor said smaller drink sizes would help reduce obesity, but the idea turned out to be a big gulp for consumers: It ran into public opposition and a legal challenge, and was struck down Tuesday as unconstitutional by an appeals court.

David Barnabe, a spokesperson for Finance Canada, confirmed the department is incorporating behavioural economics in recent policy moves. He pointed to efforts that would make automatic enrolment the default option for employees under the Pooled Registered Pension Plans – a federal proposal for privately run voluntary pension plans that require the support of the provinces. He also noted that federal regulations now force credit card companies to show on customers' bills how long it would take them to pay off the balance owing on their account if they only make minimum payments.

Mr. Barnabe would not say whether Ottawa is considering a nudge unit, but said the government draws from a wide range of information, including behavioural economics.

"The U.K. and the U.S. are far more ahead of the game," said University of Toronto economics professor Philip Oreopoulos, who has worked on a related project for the Ontario government that encourages high-school students to enroll for postsecondary education and student aid. "I certainly think there's a lot of opportunity here and it's great to hear that there's interest at the federal level."

"There are some ethical concerns about subtly pushing people's decision making in a certain direction without their knowledge," Mr. Robidoux's note says. "The opportunity for abuse on the part of policy makers is a valid concern; however, this concern is not fundamentally different from concerns over the abuse of traditional policy tools provided that nudges are designed to be transparent." The briefing note includes sections called "implications for Canada" and "next steps" – both of which were blacked out entirely. 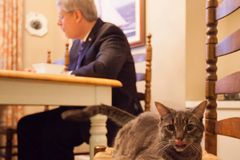 Mounties will keep an eye on U.S. inspectors in border pilot project
July 31, 2013