Stephen Harper and other Group of Seven leaders are making plans for an emergency meeting to deal with Russia's military invasion of Ukraine, a land grab the Canadian Prime Minister is comparing to Germany's aggression before the Second World War.

A G7 meeting would further isolate Russia, which, for more than 15 years, has gathered with the other major industrialized nations as the Group of Eight. Mr. Harper warned this week that Moscow's membership in this exclusive club is at risk if it does not withdraw troops from Ukraine.

Mr. Harper is one of the elder statesmen in the Group of Eight today, second in seniority only to Germany's Angela Merkel. He has been particularly cautious about foreign policy since Canada's costly combat mission in Afghanistan, but is taking a closer interest in Ukraine than perhaps any international file in recent years.

Mr. Harper has had a cool relationship with Russia, and President Vladimir Putin in particular, and sees his actions on Ukraine as a signature foreign policy item. Canada has a big Ukrainian diaspora and was the first western country to recognize Ukraine's independence in the post-Soviet Union years.

"I spoke to President [Barack] Obama on that on the weekend. I have suggested, and I know there are discussions among G7 sherpas, about the possibility of a G7 meeting in the upcoming weeks," Mr. Harper told the Commons.

All members of the G7 have suspended preparations for a G8 summit in Sochi, Russia, in June, and the Prime Minister said he expects nothing will change until "President Putin's government leaves all occupied sovereign Ukrainian territory."

Mr. Harper invoked Adolf Hitler's annexation of Austria in 1938 to describe Russia's seizure of the Crimea region of Ukraine – actions he called an "invasion and occupation" of the Eastern European nation.

"What has occurred, as we know, has been the decision of a major power to effectively invade and occupy a neighbouring country, based upon some kind of extraterritorial claim of jurisdiction over ethnic minorities," Mr. Harper said.

"We have not seen this kind of behaviour since the Second World War. This is clearly unacceptable."

Until now, the Conservative government has characterized the invasion of Russian troops as "old Soviet-style" aggression. But the government turned up the rhetoric on Tuesday as it announced that Canada will immediately suspend all military activities with Russia.

"It is not lost on the rest of the world that the same argument was made before the Second World War on the annexation of the Sudetenland from Czechoslovakia in 1938," Mr. Baird told reporters.

In a further sign of solidarity, Mr. Harper has also ordered the blue-and-yellow flag of Ukraine to be flown on Parliament Hill to show Canada's support for the beleaguered Eastern European nation.

In an emergency visit to Kiev on Tuesday, U.S. Secretary of State John Kerry urged Mr. Putin to order his soldiers to stand down and said the United States is looking for ways to de-escalate tensions.

The Obama administration announced a $1-billion energy subsidy package for Ukraine in Washington as Mr. Kerry was arriving in Kiev. The fast-moving developments came as the United States readied economic sanctions amid worries Moscow was ready to stretch its military reach further into the former Soviet republic.

He said the penalties against Russia are "not something we are seeking to do, it is something Russia is pushing us to do."

Separately, Mr. Obama spoke to German Chancellor Angela Merkel on Tuesday about how to defuse the Ukraine crisis, Reuters reported.

A senior Obama administration official said the U.S. President has offered Mr. Putin a way out of the Ukraine crisis in which Moscow would pull its forces in Crimea back to their bases and allow international monitors to ensure the rights of ethnic Russians are protected.

Opinion
Does Russia have a ‘responsibility to protect’ Ukraine? Don’t buy it
March 4, 2014 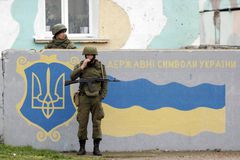 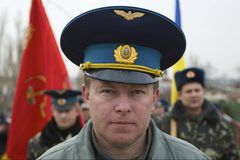 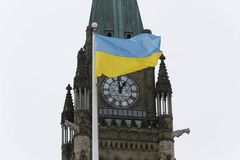