Canada will announce nearly $12-million in new funding for the elimination of land mines around the world, including in formerly held Islamic State territory in Syria, marking the 20th anniversary of the Ottawa land-mines treaty.

The funding is meant to support the safe return of civilians to Raqqa and southern Syria by removing dangerous explosives left in homes, schools and public areas by the Islamic State. Canada will also support removing mines in Cambodia, Laos, Colombia and Ukraine – countries that are among the most affected by land mines and other explosive remnants of war. Matt DeCourcey, parliamentary secretary to the Minister of Foreign Affairs, will make the announcement Monday, two decades after the Ottawa Treaty banning land mines came into force.

Lloyd Axworthy, the former foreign affairs minister who spearheaded the Canadian-led agreement, said land mines are still a weapon of choice in the Middle East.

"There's a lot of very hurt, injured people around the world, and there will be more. The land-mine issue is not over," Mr. Axworthy said.

"The massive mine laying going on in the Middle East, in Iraq and Syria, it's going to be around for a long time longer."

Mr. Axworthy said Canada could also lead an effort to invest in new technologies, such as robots and lasers, to remove mines.

Mine-advocacy groups said Canada has contributed about $17-million to mine-removal efforts globally this year. The new $12-million brings Canada closer to the $36-million these groups are calling on the government to provide this year to mark the anniversary of the treaty. They say a global decline in funding for mine action is threatening a commitment by the 162 Ottawa Treaty signatory states to clear all land mines by 2025.

"For just $36-million a year – or $1 per citizen – Canada could again support all the pillars of mine action and show the world it is committed to finishing the job it started in 1997," said Paul Hannon, executive director of Mines Action Canada.

Mr. Hannon said an increase in funding is not unrealistic for Canada, which contributed $62.8-million to mine action at its peak in 2007.

Meanwhile, casualties caused by land mines have increased in recent years. The number of people killed or injured by anti-personnel mines and other explosive remnants of war nearly doubled in 2015 to at least 6,461, compared with 3,695 casualties in 2014, according to the most recent Landmine Monitor report. Mr. Hannon said land mines act as "lethal barriers to development" because of the long-term effects they have on communities.

"There are people being killed and injured by mines that were planted 20, 30 years ago," he said. "They affect people's daily lives in all kinds of ways. You can't farm. You can't go to the market. You can't go to school."

Land mines indiscriminately target innocent civilians such as Aide Rocio Arais, an Indigenous woman from Colombia, who had both of her legs amputated below the knees after stepping on a land mine when she was 13 years old. Ms. Arais, now 22, will be in Ottawa on Monday to mark the anniversary of the treaty.

Speaking to The Globe and Mail, Ms. Arais described the day that forever changed her life. She was walking through the Colombian region of Isipu with her father and their cattle. When she ran ahead of him, she stepped on a raised section of land and triggered a land mine. The explosion threw her into the air, knocking her unconscious.

Her father was also knocked unconscious, but otherwise uninjured by the explosion. When he regained consciousness, he carried his daughter, who was bleeding out, for two hours to the closest house. There, they created a makeshift stretcher to carry Ms. Arais for another hour to the roadside. An ambulance eventually took her to the nearest hospital, where she underwent surgery to amputate both of her legs below the knees. Two days later, she woke up in the hospital, alone and confused.

"I wanted to go to the toilet but I was not able to walk, so it was a huge shock. I was crying all the time," Ms. Arais said in Spanish through a translator.

After months of physical therapy, Ms. Arais was fit with prosthesis so she could better take care of her family, including her six-year-old son. With the help of Handicap International, she purchased a sewing machine to support her family's sombrero-making business. She is also training to become a peer-support counsellor for other land-mine survivors and hopes to eventually study nursing.

Ms. Arais encouraged the Canadian government to continue to support min-removal efforts so Indigenous communities such as hers can live safely on their land.

"We need to get back our lands and to feel more comfortable and confident building our lives in the countryside. We don't want more victims. We want a Colombia free of land mines," Ms. Arais said.

Halo Trust, the world's largest humanitarian mine-clearance organization, said its work in Sri Lanka is a demonstration of the difference Canadian funding can make for mine-affected communities. Nearly half of HALO's mine-removal workers in Sri Lanka are women, many of whom are war widows whose husbands and sons who were killed or wounded in conflict.

"We feel that by employing local people to help solve their own problems enables them to have a stake in resolving these legacies of conflict and also create a meaningful livelihood for them," said Barthy Digby, HALO Trust regional director. 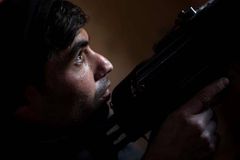 Cambodia seeking $400 million to complete demining
February 24, 2017
Watchdog says Yemen rebel land mines killed, maimed hundreds
April 20, 2017
Follow Michelle Carbert on Twitter @michellecarbert
Report an error Editorial code of conduct
Due to technical reasons, we have temporarily removed commenting from our articles. We hope to have this fixed soon. Thank you for your patience. If you are looking to give feedback on our new site, please send it along to feedback@globeandmail.com. If you want to write a letter to the editor, please forward to letters@globeandmail.com.
Comments