The comments came as NATO's top official threw down the gauntlet by calling on all members to spend more on their militaries in the face of rising tensions around the world.

Speaking in Brussels at the release of his annual state-of-the-alliance report, NATO Secretary General Jens Stoltenberg said it is incumbent on all members to spend two per cent of GDP on defence.

That is the target all NATO members, including Canada, agreed to work towards in 2014.

"All our efforts must be underpinned by adequate resources and fair burden-sharing," Stoltenberg said.

"It is realistic that all allies should reach this goal. All allies have agreed to do it at the highest level. It can be done."

Stoltenberg's report said Canada saw a small bump in defence spending in 2016, which pushed the percentage of GDP spent on defence to an estimated 1.02 per cent, up from 0.98 per cent.

That would move Canada up to 20th from 23rd in terms of spending among NATO's 28 allies, but would leave it in the bottom half of the alliance's members.

The figures are estimates at this point because the Canadian government's fiscal year ends on March 31, which means there could be some changes in the final three months.

All NATO members agreed to invest 20 per cent of their defence budgets on equipment to ensure alliance members continue to field modern militaries with state-of-the-art capabilities.

Stoltenberg's report estimated Canadian spending on military equipment jumped from about 13 per cent in 2015 to 18 per cent last year, which would represent the highest ratio in 20 years.

"When it comes to investing in the Canadian Armed Forces, Canada's priority is to ensure that our women and men in uniform have the training and equipment they need in order to do important work on behalf of Canadians," Sajjan's spokeswoman, Jordan Owens, said in an email.

"We are focused on ensuring that our partners and allies, as well as Canadians and people around the world, see the tangible benefits of our investments in defence and security."

But defence officials, who are currently reviewing the way Canada calculates defence spending compared to other NATO allies, were hard pressed to explain the sudden jump in equipment spending.

Defence analyst David Perry of the Canadian Global Affairs Institute was mystified by the reported increase, particularly since the Liberals delayed $3.7 billion in planned capital spending in the budget.

Perry said there was a valid argument for using investments in new equipment as another way to measure Canada's NATO commitment, in addition to overall spending.

Canada has consistently under-invested in equipment, he said, which is why the country is currently dealing with aging fleets of fighter jets, helicopters and naval ships.

"If we actually get an increase like that, that's pretty consequential," he said.

Prime Minister Justin Trudeau appeared to all but dismiss the two per cent target during a visit to Germany last month, saying: "There are many ways of evaluating one's contribution to NATO."

The government has reiterated that message a number of times, emphasizing Canada's military contributions to Latvia, Ukraine and Iraq in lieu of large spending increases.

While Liberal insiders say Canada's message has resonated in Washington, where the Trump administration has pushed for more spending from its NATO partners, Stoltenberg was adamant that all allies meet the two per cent target.

At one point during Monday's news conference, he listed the many ways that Spain has contributed to NATO operations and security, which includes contributing troops to a Canadian-led battle group in Latvia.

"Having said that, of course, Spain — as many other allies — invests too little in defence," Stoltenberg said.

"And that's exactly why we decided in 2014 to stop the cuts, gradually increase, and move towards spending two per cent of GDP on defence. And I expect that Spain will deliver on that."

A former prime minister of Norway, Stoltenberg acknowledged the difficult choices politicians must make when it comes to spending limited taxpayer dollars.

He said politicians prefer to spend on education, health and infrastructure and many countries cut defence spending as tensions eased in the wake of the Cold War.

Canada spends about $20 billion a year on defence and would need to double that to reach the NATO target.

Only five NATO members currently spend two per cent of GDP on defence, though several have committed to reaching the target in the next few years. 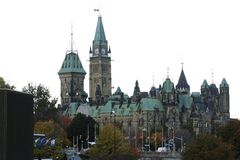