Ottawa and the provinces are poised to conclude Canada's first national air-pollution strategy, which includes a new standard that is expected to reduce smog significantly in the coming decade.

The new regime, which federal and provincial environment ministers are slated to approve in the fall, is the result of a five-year discussion among governments, environmental advocates, health groups and industry.

The new standard is aimed at bringing consistency to uneven legislation across the country, although provinces will ultimately decide how to meet the new targets. Provincial governments will establish "air zones" in their jurisdictions, so that action can be tailored to local conditions. The idea is that if pollution levels within a particular zone start to rise, the province will identify the source and take action, even if the air quality in the area still meets the national standard.

"Where the air is clean, we want to keep it clean. It is not about polluting up to that level," said Bev Yee, an assistant deputy minister of the environment for the province of Alberta.

The first targets have not yet been unveiled, but they are expected to be relatively modest, and the plan is still a work in progress. But the strategy is considered a step toward better air quality for Canadians.

"We have designed a new system that will really significantly improve air quality across the country, and with great benefits to the health of Canadians," said Christopher Wilson, director of public affairs and advocacy for the Canadian Lung Association. "It won't be perfect, but it will make important improvements and lay the groundwork for continuous improvements."

The initial focus is smog, the noxious mixture of gases and particles that can irritate lungs and increase the risk of asthma attacks and other serious health problems, especially for people with cardiac and respiratory conditions. The strategy will set the stage for modestly more stringent national standards on ground-level ozone and fine particulate matter – the main components of smog – by 2015, and more significant improvements by 2020.

The national standards are a crucial component of the air-quality strategy, but just one of several elements in the plan. Over the the past five years, industries have worked with advocacy groups to establish what constitutes reasonable emissions levels in more than a dozen sectors.

The oil-and-gas and other energy sectors, however, have not yet reached consensus, Ms. Yee said.

But she is confident they will. "The level of collaboration, it really has been unprecedented," Ms. Yee said.

Ottawa, Alberta and Ontario have been at the forefront of developing the new air-quality management system. Environment will remain an area of shared jurisdiction, but the federal government will step in if provincial regulations aren't doing the job.

Environmental, health and industry groups caution that the success of the system depends on how it is implemented.

Gordon Lloyd of the Chemical Industry Association of Canada said the provinces also need to consider non-industrial sources of air pollution, including motor vehicles and municipal activities, when they draw up their plans for meeting the national standards.

Stephen Hazell, an environmental lawyer and former head of the Sierra Club of Canada, said he expects the new agreement will lead to a 20 per cent reduction in smog-related emissions over five years. That's less than the 50 per cent reduction in air pollution by 2015 that Prime Minister Stephen Harper, who has suffered from asthma, promised in 2007. But that goal was announced without consulting industry, the provinces or environmental groups, Mr. Hazell said.

"There were a lot of grumpy people. We knew they couldn't possibly deliver on this."

Mr. Hazell and representatives of Pollution Probe and the David Suzuki Foundation got together with industry groups and came up with an alternative proposal for national air-quality standards. Health groups, like the Lung Association, got involved, and Ontario and Alberta came on board.

By 2009, Jim Prentice, then the federal environment minister, threw significant resources into the effort to build a truly national strategy, Mr. Hazell said.

"It is reasonable progress, and you've basically got people working together in good faith," he said. Corporate accounting for pollution possible within a decade
June 21, 2012 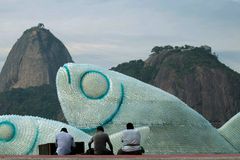