The Prime Minister's Office once defended RCMP Superintendent Bruno Saccomani from controversy as the officer who whipped Stephen Harper's security detail into an elite squad – and now the Harper government is facing new questions about his unusual appointment as ambassador to a complex Middle East country, Jordan.

It is, in the view of foreign-policy experts and diplomats, a peculiar choice in an odd place. Veterans could not recall another RCMP officer named as an ambassador, and his posting to Amman is neither sumptuous nor simple: the country, key to Middle East stability, is suffering turbulence with its ruler, King Abdullah, delicately balancing complex political forces.

The appointment – viewed by some as another slight by a government that has little trust in the foreign service – is doubly unusual because Supt. Saccomani essentially holds middle-manager rank in the Mounties, but his time spent travelling with and protecting the Prime Minister has clearly made him a man with Mr. Harper's ear.

"It's very unusual, to put it mildly. This is getting into what I would call the Upstairs, Downstairs category," said Fen Hampson, distinguished fellow with the Centre for International Governance Innovation and chancellor's professor at Carleton University. "We do have a history of what you might call grace-and-favour appointments, but they usually go to politicians or people who've been supportive of the party in question."

Officially, the government refused to confirm or deny reports of Supt. Saccomani's impending posting to Jordan, but sources said his name has been put forward. In the Commons, Conservative MP Deepak Obhrai, parliamentary secretary to Foreign Affairs Minister John Baird, insisted he wouldn't comment on "speculation," but lauded Supt. Saccomani as a "very distinguished individual with a strong record as a professional public servant."

Prime ministers have often named political appointees to high-profile posts in places like Washington, London and Paris, staffed now by former premiers and ministers. On occasion, top military brass have been named as ambassadors. Former diplomat Ferry de Kerckhove said the Harper government has not abused political appointments, though it has stepped up appointments of senior bureaucrats from outside the foreign service.

He said the Conservatives, since taking office, mistrusted the foreign service as Liberals or elitists and this choice will reinforce the impression among diplomats that "they count for very little in the eyes of the political powers in Ottawa."

Mr. Harper's PMO has made it clear in the past that it rates Supt. Saccomani highly, defending him when an internal RCMP management review found he was a domineering boss and some of his employees complained of intimidation and harassment. They credit him with making the PM's security detail an elite unit with beefed-up gear that conducts mock-attack drills, has a gung-ho attitude and boasts higher fitness levels.

He has also spent time in a posting abroad – four or five years as RCMP liaison officer in Rome in the late 1990s, responsible for police-liaison work in a dozen countries, including a few in the Middle East, according to former diplomats. But that work involved checks on immigrants, criminal-justice work such as extradition cases and multinational investigations, rather than political diplomacy, they noted.

Marc Lortie, the former Canadian ambassador to France and veteran diplomat, said that gives Supt. Saccomani some knowledge of the diplomatic world, and the region.

"He knows the ABCs of the diplomatic life … and the challenges inherent to a place like Jordan," Mr. Lortie said. "Secondly, he has the confidence of the Prime Minister's Office." That means his Jordanian hosts will see him as someone who is heard in Ottawa, he said.

But Jordan is a complex country, facing a key challenge.

Middle East expert Michael Bell, a former ambassador to Jordan, pointed to a lengthy recent article in the Atlantic in which King Abdullah suggested he feels squeezed between the Muslim Brotherhood and his security forces, and is struggling to balance the rivalries of East Bank Jordanians and the millions of Palestinians who have come since 1948 and are now the majority of Jordan's population of 6.2 million. And an influx of half a million Syrian refugees have increased pressure on a government with a weak economy and public finances.

At the same time, Canada, concerned for the stability of a country viewed in Ottawa as a bulwark of moderation in the Middle East, has also increased security co-operation with Jordan, including providing its army and police with funding for equipment to deal with the Syrian refugee flow.

"If the Prime Minister is going to focus on security co-operation, he may feel that having his own guy there, so to speak, is a reassurance to him," Mr. Bell said.

Want to be part of The Globe's Google hangout with Tony Clement? Sign up here
June 19, 2017
Canadian vets to tour South Korea despite threats from North
May 11, 2018 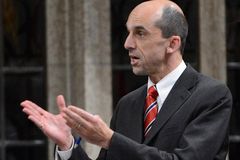