One of the first casualties may be Quebec's only nuclear station, the Gentilly-2 plant, which is slated for a $2-billion refurbishment to extend its life for 40 years. The Parti Québécois has joined with activists in the province to demand the government put a halt to the project.

In Ontario, environmental groups are urging the Canadian Nuclear Safety Commission to suspend licensing hearings into Ontario Power Generation's plan to build two reactors at its Darlington site. The review panel began its work on Monday in Courtice, Ont., and the provincial and federal energy ministers have said there is no reason to adjourn

However, the CNSC has ordered all reactor operators to review their safety protocols in light of the unfolding crisis at the Fukushima Daiichi nuclear station, and to report on plans to address shortcomings by the end of April.

In a letter to his Ontario counterpart, federal Natural Resources Minister Christian Paradis said the federal regulator has been closely monitoring the unfolding reactor crisis at the Fukushima plant, which was crippled in the earthquake and tsunami that hit Japan earlier this month.

The nuclear regulator has told all reactor operators "to review initial lessons learned from the Japanese earthquake, and re-examine the safety cases for the reactors, focusing on external hazards such as seismic, flooding, fire and extreme weather events," Mr. Paradis said in a letter to Ontario Energy Minister Brad Duguid, a copy of which was obtained by The Globe and Mail.

As well, the regulator wants the operators to review their systems that prevent and mitigate severe accidents and their emergency preparedness, he said.

"Operators are to report, by April 29, 2011, on implementation plans for short- and long-term measures to address any significant gaps." Mr. Paradis said.

Hydro-Québec has been studying a proposal to refurbish the Gentilly-2 plant, which has one Candu 6 reactor, but the utility was reluctant to commit in light of cost overruns at a similar project that Atomic Energy of Canada Ltd. had undertaken in New Brunswick.

"It is raising many questions and concerns in terms of health and safety," Ms. Marois told reporters Monday.

"But the principal argument is that it's not necessary to refurbish the plant at such an elevated price when Quebec has the means - through energy efficiency, renewable energy and its hydro electricity - to avoid nuclear."

The Ontario government is planning to purchase two reactors from AECL for the Darlington site, though talks have stalled pending the sale of the federal Crown company by the Harper government.

Mr. Duguid has urged the federal regulator to consider the Japanese experience as it begins reviewing Ontario Power Generation's application to have new reactors at the Darlington site.

Mr. Duguid rejected calls to suspend the OPG review until the situation in Japan is resolved and the global community has had a better chance to assess the safety failures in Japan that have resulted in the world's worst nuclear accident since the 1986 explosion at the Chernobyl plant in Ukraine.

The panel established by CNSC and Environment Canada began hearings Monday in Courtice, Ont., to determine the suitability of the Darlington site. OPG would require separate licences to construct the reactors and to operate them.

As the hearing opened, the provincial New Democrats and environmental groups demanded an adjournment, to no avail.

Theresa McClenaghan, of the Canadian Environmental Law Association, pressed the procedural hearing for an adjournment of the formal hearings in light of the Japanese disaster.

"If we proceed now, we will receive assurances as opposed to information," she told the panel. "Those assurances cannot possibly be based on an informed analysis of the events in Japan."

- With files from The Canadian Press 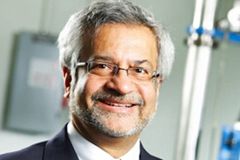 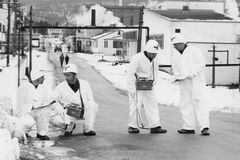 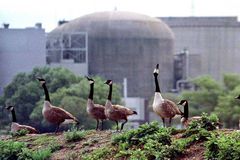 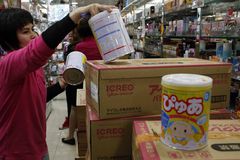 new
In post-quake Japan, no rest for weary government spokesman Edano
May 1, 2018 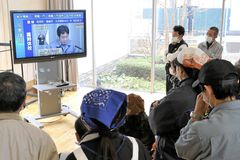