Canada is set to begin shipping bullets to security forces battling the Islamic State militia in Iraq this week as the Commons holds an emergency debate on Ottawa's military commitment to the conflict-torn country.

Both the NDP and Liberals have called for a formal debate on the matter, and on Monday afternoon, the Speaker of the House of Commons granted a Liberal request for an emergency debate, which will be held on Tuesday evening. However, Mr. Harper indicated during Monday's Question Period the matter would not be put to a vote because the mission is not a combat operation.

The government has committed about 70 military advisers for 30 days, although it is widely believed the assignment will be extended. Those advisers have not begun their assignment. However, some soldiers were in Iraq last week to conduct advance planning.

During Question Period, Opposition Leader Thomas Mulcair accused Mr. Harper of breaking a 2007 pledge that "any future military deployments must also be supported by a majority of parliamentarians."

"That is a direct quote from the Prime Minister," Mr. Mulcair said before the debate had been scheduled. "It puts his honour on the table. Now he is sending Canadian troops to join the war in Iraq without a vote in the House, without even a debate in this House. Why is the Prime Minister breaking his own solemn promise to Canadians?"

He was referring to a section of the Conservative government's 2007 throne speech dealing with Canada's military commitments in Afghanistan.

Mr. Harper replied that any majority government has the right to commit to military operations. "That said, wherever there has been a deployment of a combat nature, the government has put this to Parliament for a further confidence vote, and that is not the case with the present mission to Iraq," he added.

Several hours earlier, Mr. Harper delivered a campaign-style speech outside the House of Commons to mark the launch of a new parliamentary session. He said Canadians are "sickened" by the behaviour of Islamic State.

The militant group, which has taken over large sections of Syria and Iraq, released a video on Saturday purporting to show the beheading of British aid worker David Haines, which Britain's Foreign Office has said appeared to be genuine. Mr. Haines was the third Western hostage the group has killed in recent weeks.

In an apparent reference to Liberal Leader Justin Trudeau's comments after the Boston Marathon bombing, Mr. Harper said, "We know their ideology is not the result of 'social exclusion' or other so-called 'root causes.'

"It is evil, vile, and must be unambiguously opposed," Mr. Harper said.

After the 2013 bombing, Mr. Trudeau said during an interview that it would be important to consider the "root causes" of the tragedy, in addition to security issues, to understand why someone might feel so excluded from society.

Asked about Mr. Harper's comment later on Monday, Mr. Trudeau replied that he is "fully supportive" of Canada's mission in Iraq, including the effort to help local security forces in their battle against Islamic State militants.

World leaders met in Paris on Monday for an international conference on peace and security in Iraq. Foreign Affairs Minister John Baird, who attended on Canada's behalf, said the group discussed a range of issues, including how to limit financing for the Islamic State militants and how best to support Iraq's new government.

A new airlift operation from the Czech Republic will begin on Thursday and will use one CC-130J Hercules cargo aircraft and one CC-177 Globemaster III transport plane. About 100 Canadian Armed Forces aircrew, technicians and logistics specialists are supporting the effort.

These CAF assets are also continuing to fly military supplies to Iraq from Albania as well. Since Sept. 12, 13 flights have delivered 228,000 kilograms of supplies. 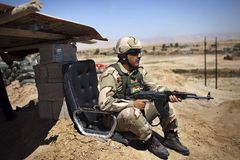