Canada is reopening its embassy in Libya's capital, even as fighting continues in pockets of the country still held by loyalists of the hunted dictator Moammar Gadhafi, The Canadian Press has learned.

Sources say a small team of diplomats, led by Canada's ambassador to Libya Sandra McCardell, arrived in Tripoli on the weekend to conduct a security assessment.

Officials wouldn't comment on the state of Canada's abandoned diplomatic mission but said Ms. McCardell would have to deal with "refurbishing and securing" the premises.

The diplomats have set up shop at an alternative location in Tripoli, and expect to be joined by a full contingent of foreign service officers to get operations up and running, sources say.

Canadian fighter jets played a major role in the UN-mandated NATO-led bombardment to protect civilians from Colonel Gadhafi, who has ruled the north African nation with an iron fist for four decades.

Col. Gadhafi's regime has crumbled but the dictator himself remains at large. From hiding, he urged his followers Monday to keep up the fight.

Canada joined several dozen other countries this past spring by recognizing the Libyan rebels, the National Transitional Council, as the true representatives of the Libyan people.

In June, Foreign Affairs Minister John Baird visited the rebels in their stronghold of Benghazi in eastern Libya but stopped short of establishing a diplomatic outpost there as some NATO allies had chosen to do.

Mr. Baird is to give further details of Canada's diplomatic re-engagement with Libya on Tuesday morning when he speaks to reporters in the House of Commons foyer.

"By re-establishing and resuming operations at Canada's embassy in Tripoli, this will provide us with a diplomatic presence in Libya," said a senior government official, who spoke in advance of the minister's announcement on the condition of anonymity.

"Canada is in a strategic position to strongly promote Canadian values and protect Canadians' interests," the official added.

Though Canada is proud to have supported the struggle "to realize a new Libya," senior officials signalled that they expect the council to realize its promise of building a true democracy.

"We now expect the new government of Libya to fulfill its commitments to freedom, democracy, human rights and the rule of law."

Earlier this month, Prime Minister Stephen Harper announced that Canada was lifting sanctions on Libya and was working within a United Nations framework to free up an estimated $2-billion in frozen assets from the Gadhafi regime.

At the recent international meeting on Libya in Paris, Mr. Harper signalled his impatience with providing the rebel council the monies it needs to run the country and restore "a normal life" for its people.

Officials said it was too early to say whether Mr. Baird's Tuesday announcement would clear the way for the two major Canadian firms, the oil company Suncor and the engineering giant SNC Lavalin, to resume operations.

But officials were upbeat about the prospects of restoring full diplomatic and commercial relations with Libya.

Calgary-based energy firm Suncor had been working with the state-owned National Oil Corp. and was producing about 50,000 barrels of oil a day before the violence began.

SNC Lavalin is involved in several Libyan ventures, including building a prison and a part of a water-supply system.

Mr. Harper said he had received assurance that a new Libyan government would honour contracts with Canadian companies.

"The job is not yet done," the official told The Canadian Press Monday evening. But Canada's renewed diplomatic presence "demonstrates Libya is open for business."

Ms. McCardell has played a key role in leading Canada's Libya strategy after she was withdrawn from Libya earlier this year prior to commencement of NATO's air strikes.

Technically, she will have to present her diplomatic credentials to the new Libyan government before she formally becomes Canada's full-fledged ambassador once again.

In the meantime, she is leading the team that is dealing with the logistical challenges of re-opening the embassy.

Officials would not say whether Ms. McCardell's team included members of the Canadian Forces.

Four U.S. military members were part of an American team of diplomats that also arrived in Tripoli on the weekend to restore and secure the U.S. embassy, in part out of concern that it may have been booby-trapped during the fighting.

How will Harper know when the Libya mission is over?
May 3, 2018 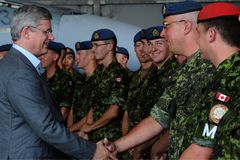 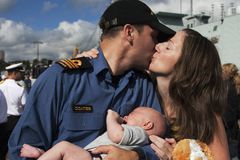 Libyan-Canadians press Ottawa to release billions in frozen funds
May 3, 2018 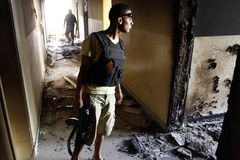