Eric Hughes always knew the Canadian Museum for Human Rights would be controversial, but even he acknowledged the past few weeks have been tough.

"It has been a challenging month for sure," said Mr. Hughes, a Calgary businessman who took over as interim chair of the museum's board of trustees on Tuesday.

That's putting it mildly. For some time, the museum has been beset by high-level departures, hefty cost overruns and vociferous complaints from some ethnic communities about its proposed contents. The project was supposed to open in 2013, but officials now say it won't be ready until 2014 and even that date is uncertain, partly because of a shortfall in funding. Meanwhile, a group that's raising money to help pay for construction is $20-million short of its $150-million target.

Mr. Hughes was rushed into position Monday because the existing chair, Winnipeg developer Arni Thorsteinson, surprised the board by announcing that he is resigning as of Jan 1, eight months before his term expired Museum officials say Mr. Thorsteinson will continue to be involved in fundraising.

"My background primarily has been as a chartered accountant, someone who starts businesses and grows businesses," said Mr. Hughes, who has been vice-chair of the board for two years. "And so I look at this one as being another business with a lot of challenges because we're trying to do everything, starting a business from the ground up with an enormously inspiring and very complicated building."

The museum has been controversial ever since it was proposed by the late Izzy Asper more than a decade ago. He persuaded the former federal Liberal government to join in the cause and the government eventually committed $100-million toward construction and promised $21.7-million annually for operations. Contributions also came from the Manitoba government and the City of Winnipeg.

The initial building cost was pegged at $265-million in 2007. Construction began two years later at the Forks historic site in downtown Winnipeg, and by then the cost had increased to $310-million. The museum is expected to release another higher estimate in a few weeks and there are reports the total cost could climb by $35-million.

The exterior of the museum is nearly finished but it will take years to complete the inside, which includes 47,000 square feet of exhibition space. The museum has stopped awarding tenders for some construction work until it raises more money. And it has cast doubt about whether it can operate on $21.7-million annually once the building is opened. That led the Conservative government to say it would not kick in any more funding, leaving the museum to find other sources of revenue.

There have also been heated debates over the museum's programming, including during a noisy public forum earlier this month in Winnipeg. The museum plans to features 12 galleries dedicated to matters such as the Holocaust and the plight of Canada's aboriginals. However, there have been questions about its handling of other issues such as the Ukrainian genocide, which will be included in a single gallery with other tragedies in Armenia, Rwanda and Srebrenica.

The ongoing troubles have prompted a flood of bad press, with one Winnipeg newspaper calling it a "gong show" this week.

Mr. Hughes said he is not surprised the museum has become a lightening rod for controversy.

"We are doing something that has never ever been done before in this country's history," he said Tuesday. "We're starting a museum, we're starting it from scratch, we're doing it outside of the capital region and we're doing it on a topic that I think is extraordinarily challenging."

The rising costs are "all within the realm of reasonable and expected," he added. As for the delays: "I don't think anyone didn't anticipate delays. I think the fact is that everyone tends to budget and forecast and plan out on an optimistic basis."

Mr. Hughes said fundraising has been challenging given the economic climate and the bad publicity. But he said the fundraising group is exploring new potential sources of donations and the museum is looking into corporate sponsorships.

"We've got a lot of things to do all at once and I think personally what we have never lost focus of is we are putting together an incredible museum for all Canadians," he added.

Supporters of the project said the federal government has frequently covered cost overruns for its national museums in Ottawa, such as a recent $216-million overhaul at the Museum of Nature that went over budget. "We're not talking about a lot of money," said Arthur Schafer, director of the Centre for Professional and Applied Ethics at the University of Manitoba. "We've come so close and it really just needs one final push and the government seems to be backing off."

Prof. Schafer said the museum has already served to bolster education on human rights, prompting several research projects, conferences and new courses at the U of M and the University of Winnipeg. 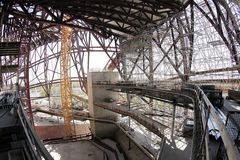 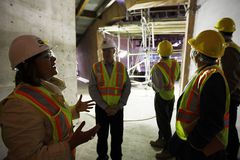 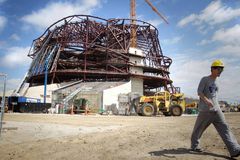 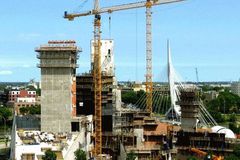 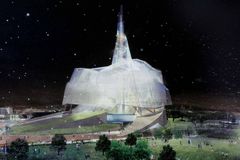 Ukrainian Canadian Congress campaigns for inclusion in human rights museum
December 22, 2010
Downtown Winnipeg aims for the big leagues
June 13, 2011
Leonard Asper gets off the mat
May 24, 2011
Follow Paul Waldie and Daniel Leblanc on Twitter @PwaldieGLOBE @danlebla
Report an error Editorial code of conduct
Due to technical reasons, we have temporarily removed commenting from our articles. We hope to have this fixed soon. Thank you for your patience. If you are looking to give feedback on our new site, please send it along to feedback@globeandmail.com. If you want to write a letter to the editor, please forward to letters@globeandmail.com.
Comments