It's getting almost crowded at the North Pole – and a lot easier to get there.

Barely 10 days after the German icebreaker Polarstern reached the North Pole, the elderly Canadian icebreaker Louis St. Laurent and its newer, more powerful American consort, Healy, were only a few kilometres away and expected to reach the top of the world Friday.

For the Louis St. Laurent, it will be the second visit to the Pole, 17 years after the first.

Massive declines in Arctic ice cover – especially the near-total melt out of tough, multi-year ice that thwarted explorers for centuries and defeated even modern, powerful icebreakers until recent years – have made High Arctic passages more common and may soon see seasonal summer trade routes opening up.

A Canadian super-icebreaker – first promised by the Conservative government more than two decades ago as a nuclear-powered goliath – has been long delayed and, now downsized by the Harper government, may finally be coming.

Meanwhile, other nations, notably China, South Korea and Russia, all with an eye on Arctic trade routes as well as polar research, have built and launched big icebreakers. Russia has added to its already world-beating icebreaker fleet.

"These other nations get it in terms of climate change," said Michael Byers, referring to the icebreaker building boom and the concerted effort to get vessels into the High Arctic for research. "It should send a strong signal to Canada about the seriousness of these other countries," added Prof. Byers, who holds the Canada Research Chair in Global Politics and International Law at the University of British Columbia.

But the race to the Arctic is only partially about research. Untold oil wealth, the prospect of new, if seasonal, trade routes have turned the top of the world into the 21st-century version of The Great Game, with major powers jockeying for influence.

Exxon anteed up billions for risky Arctic Russian drilling rights this week, and the large tankers – escorted by (unneeded) icebreakers – sailed the shortcut across the top of Russia this summer.

Captain Alex MacIntyre, a Canadian ice pilot who has been working in the ice-choked Canadian Arctic archipelago since 1968, said he was "astounded" by the lack of ice remaining in the Northwest Passage as he helped guide a Russian research icebreaker-turned-cruise-ship through in August.

Decades of delay – the Louis St. Laurent, Canada's largest icebreaker, is 42 years old and was supposed to be scrapped 10 years ago – may finally be ending. The Harper government is expected to finally sign a $1-billion deal for a new super-icebreaker to be delivered by 2017.

"As the Coast Guard begins celebrating its 50th anniversary next year, we are looking forward to increasing Canada's presence in the North through our new polar-class icebreaker, the CCGS John G. Diefenbaker," Fisheries and Oceans Minister Keith Ashfield said.

Even it that timetable is kept, it won't break any ice until long after new Chinese, South Korean and Russian vessels start crisscrossing the summer Arctic with its shrunken and thinned skullcap of ice.

Prof. Byers suggested the government may be buying a super-icebreaker designed for ice conditions that existed decades ago and that Canada's real needs might be better served by three or four more modest icebreakers. None of the three icebreakers at the North Pole this summer were close to the massively powered Russian super-icebreakers. 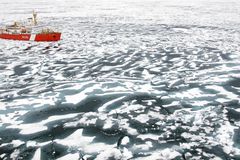