The Liberal government is facing calls to reconsider its decision to let Beijing-based Anbang Insurance Group buy a stake in British Columbia's health-care sector after the Chinese government announced it had assumed direct control of the massive conglomerate.

Last year, Innovation, Science and Economic Development Minister Navdeep Bains approved the sale of Retirement Concepts, one of B.C.'s biggest retirement-home chains, to Anbang, a holding company with a murky ownership structure. The transaction, believed to be worth more than $1-billion, gave Anbang control of the Vancouver-based chain.

In Beijing on Friday, government officials announced they are assuming control of Anbang and that chairman and key shareholder Wu Xiaohui is being prosecuted for economic crimes. China's insurance regulator said Anbang had violated laws and regulations that "may seriously endanger the solvency of the company."

Michael Byers, who holds a Canada Research Chair in global politics and international law at the University of British Columbia, said the development raises serious concerns about the judgment exercised last year when Ottawa approved the deal despite "lots of warning bells" in international coverage of the company.

"The Chinese government is now running one of the largest retirement-home chains in B.C.," Prof. Byers said. "This should prompt a serious reconsideration of how the Canadian government approaches all major Chinese investments."

The latest available billing records from B.C.'s Ministry of Health show the province paid Retirement Concepts $86.5-million in the 2015-16 fiscal year, more than any of the other 130 similar providers.

During the government takeover of Anbang, which Beijing says will last for one year, the company will be managed by a group of officials from the China Insurance Regulatory Commission (CIRC), the central bank and other key financial regulators and government bodies. This group will attempt an equity restructuring of the insurance giant, even as it keeps Anbang operating as usual, protecting the rights and interests of its consumers and stakeholders, the CIRC said.

The takeover of Anbang, which claims 1.97 trillion yuan ($392.7-billion) in assets and ranks 139th on the Global Fortune 500 list, is a defining blow to a conglomerate best known for acquiring New York's landmark Waldorf Astoria hotel.

"They need to do a full and proper review on this because thousands of British Columbia seniors rely on this company," he said.

Mr. Bains's office said the government is watching what is unfolding at Anbang, but declined to say more.

"We are aware of the situation and monitoring it closely. Due to the confidentiality provisions of the Investment Canada Act, we cannot comment further at this time," said Karl Sasseville, press secretary to the minister.

Conservative foreign affairs critic Erin O'Toole called on the government to release all the details from the review of the acquisition to ensure that no conditions for that approval have been affected by the Chinese government's recent action.

Azim Jamal, the former owner of Retirement Concepts and now chief executive of the company that manages the chain for Anbang, said there is no reason for Canadians to be concerned.

"The operations of Retirement Concepts are regulated by provincial health authorities in B.C. and Alberta. We are required to provide regular reporting to these bodies on a monthly basis and to meet strict licensing standards," he said. "There will be no changes to our team or our day-to-day operations regardless of any discussions about ownership of the real estate."

"It is early days, and we will be expecting that more information be provided in the near future about any impacts to the residential care sector resulting from this action," he said in a statement.

Mr. Dix noted it was Ottawa, not the province, that approved the Anbang purchase "in spite of significant concerns in B.C."

The charges against Mr. Wu come amid an anti-corruption campaign by Chinese President Xi Jinping.

Anbang emerged from relative obscurity in recent years to snap up companies and properties around the world.

It has faced repeated questions in the United States about who actually owns the giant firm and what ties it has to the Chinese state. The New York Times reported in 2016 that a majority of Anbang was held by firms fully or partly owned by relatives of Mr. Wu.

The same year, Anbang withdrew an application for regulatory approval to buy Iowa-based Fidelity & Guaranty Life after the New York Department of Financial Services sought more details about the Beijing firm's funding and shareholder structure – information Anbang was not immediately able to provide. 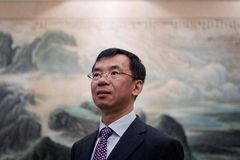 China accuses Canadian-Chinese tycoon of major role in pyramid scheme
July 28, 2017
Chinese firm expelled from trade association days before takeover of Canadian high-tech company
July 21, 2017
Follow Steven Chase and Robert Fife on Twitter @stevenchase @RobertFife
Report an error Editorial code of conduct
Due to technical reasons, we have temporarily removed commenting from our articles. We hope to have this fixed soon. Thank you for your patience. If you are looking to give feedback on our new site, please send it along to feedback@globeandmail.com. If you want to write a letter to the editor, please forward to letters@globeandmail.com.
Comments are closed