For weeks the lights have burned around the clock at the sprawling, long-sleepy NATO base near Naples. Dining rooms have been torn up and turned into command centres, cables snake down corridors, and hundreds of planners and intelligence analysts have poured in, all to run a major, non-stop, multinational air war and naval blockade of Libya.

This was not the mission Canadian MPs agreed to join when they unanimously voted to back a deployment this spring. Then, the goal was to erect a no-fly zone, shielding Libyan civilians from attacks by Moammar Gadhafi's air force. Canada would provide a frigate, six fighters, and surveillance and refuelling planes. But in three months, the NATO effort has escalated into a fierce bombing campaign that have left Tripoli buildings in rubble and centred on ousting the country's long-time ruler.

The increasingly aggressive bombing - on Tuesday alone the capital was struck 60 times, including, according to sources, by Canadian jets - are exposing internal fractures within NATO, with some countries choosing to opt out or not continue. U.S. Defence Secretary Robert Gates suggested the lack of will may have rendered the alliance useless.

And there are questions about what the ultimate end-game of the mission is, and how - and when - the troops will exit.

While the NATO assault has elicited criticism in other countries, politicians in Canada have yet to grapple in public debate with the fundamental questions about the mission's shifting goals, and the options for achieving them: Should we be in a war of bombing Libya into regime change? And how will it end if NATO's air war doesn't drive Col. Gadhafi from power?

On Tuesday, MPs will finally have a parliamentary forum to debate the specific issue of a three-and-a-half-month extension of the shifted mission - and the larger question of Canada's role in an ill-defined combat effort. But there is little reason to expect the country to break ranks with NATO.

The Conservative majority means approval is assured. And the opposition appears unlikely to battle vociferously against it. It was the New Democrats, after all, who first supported a no-fly zone, and though they oppose a goal of regime change, they are reluctant to vote against the mission now. The Liberals support an extension.

Stephen Harper's Conservatives have backed the mission's shifts. The Canadian mission in Afghanistan was in large part about supporting allies, and now Canada will face a similar test in Libya, as seams fray among partners and goals change.

Defence Minister Peter MacKay addressed the course change Thursday, asserting that while protecting civilians is still the goal, "Gadhafi must leave for those objectives to be achieved." And if he doesn't? "I think we are making progress and I think we will meet with success," Foreign Minister John Baird said. "I'm not going to speculate on other options. We'll take them as they come."

Three and a half more months will bring the mission's price tag to $60-million, from $26-million thus far. Canadian CF-18s flying 361 sorties have dropped 315 bombs. The NATO campaign has broadened since late April, from hitting Libyan forces attacking rebels to intensified bombing of Col. Gadhafi's compounds, command centres and militia buildings in Tripoli.

"There's little doubt that the military mission is quite obviously directed towards dislodging Gadhafi," said Shashank Joshi, an analyst with the Royal Services Institute in London.

Canada is one of eight allies taking part in the airstrikes, but it's the bigger allies who lead the strategy. A joint statement by the leaders of the U.S., Britain, and France that it would be a betrayal to leave Col. Gadhafi in power was the signal for the escalation of airstrikes. But their arguments that he is slowly being forced out have not quelled dissent at home.

In the U.S., left-wing Democrats and right-wing Republicans passed a resolution demanding that President Barack Obama detail costs, explain the mission's goals, and why it's vital to U.S. interests. Virginia Senator Jim Webb asserted "the reasons for us to continue in this effort are too ill-defined."

So far, Mr. Joshi said, it appears it will take many months, or more, for the airstrikes to achieve the goals, but it will also require a political strategy to encourage elements of Col. Gadhafi's regime to speed his departure.

Sharing the burden, meanwhile, has caused rifts. Mr. Gates privately pushed five NATO allies to join airstrikes at NATO's Thursday meeting. On Friday, he chastised allies for failing to contribute to the alliance, citing Libya as an example. "It has become painfully clear that similar shortcomings - in capability and will - have the potential to jeopardize the alliance's ability to conduct an integrated, effective and sustained air-sea campaign," he said.

For Mr. Harper, the commitment to the alliance is likely to weigh heavily, as it did in Afghanistan. Now in, Canada would face criticism for pulling out.

It's a strategy delegated to commanders, led by Canada's Lieutenant-General Charles Bouchard, at the bustling Allied Joint Force Command Naples, who have overseen more than 10,000 sorties. With eager-to-please defectors spilling targeting details to the web of intelligence, from spy satellites, drones and eavesdropping aircraft, the intense Tripoli raids are punctuated with craters and flame and an increasingly personal message to Col. Gadhafi.

"Gadhafi's time is up, his troops are demoralized, his generals and ministers are leaving him, the Libyan people don't want him," Wing Commander Mike Bracken said. This week, in a grim message on Col. Gadhafi's 69th birthday, warplanes flew daylight raids, blasting the Libyan's leader's downtown Tripoli compounds with tonnes of high explosive.

Will the change in approach be tested in Commons debate? The NDP says it hasn't decided on its vote. It clearly wants to offer support, but also wants concessions, including a statement that Canada will step up humanitarian and diplomatic efforts and aid Libya after the conflict ends, foreign affairs critic Paul Dewar said. Although the government is talking about regime change they oppose, he said what matters is that the resolution's language backs the limited mission of protecting civilians.

Whatever the terms of the resolution, MPs face a vote on extending Canada's role in the mission, as it has evolved. "I don't think you can really participate in the mission without endorsing the overall mission," Mr. Joshi said. "Otherwise, what is the purpose of your being there, and what is your strategy? Because the only exit strategy that exists right now is a change of regime."

With a report from Paul Koring in Naples

Issue: Back to war as part of a United Nations collective police force.

"It seems to me that all of us should be greatly encouraged by the hope this offers that the steady wave of aggression which has spread over such a tremendous part of the world in these last few years may at least be stemmed by the vigorous and effective joint action of free men throughout the world." - Louis St. Laurent, prime minister

Issue: Government sent in observer troops amid skepticism over prospects for real peace.

"No one who has studied the documents can fail to have any other feeling but that the situation is dangerous and precarious." - David Lewis, New Democratic Party leader

Issue: A move from a role as peacekeepers to peacemakers.

Issue: Agreement to send in ground troops but disagreement over a parliamentary vote on the decision.

"What is important here is that the people of Kosovo are able to return to their homes and are able to live in peace and security. That is what is important. We need a military force there to ensure it." - Arthur Eggleton, defence minister

"In the struggle ahead there may be no unconditional surrender or victory parades. However, there will be countless victories, the quiet victories of everyday life." - Jean Chrétien, prime minister

Issue: Indecision and cabinet division over Canadian participation in the U.S. action without UN support.

"Friendship and alliance do not imply that we two sovereign countries must adopt identical approaches on all issues." - Bill Graham, foreign affairs minister 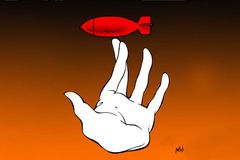 Harper to put Libya mission extension before Parliament for approval
May 27, 2011