Large numbers of Canadians are so concerned about the effects of mefloquine on this country's armed forces that they want the government to contact those who might have been harmed and to pay for research into the long-term psychological problems the anti-malarial drug may cause.

Those are the findings of a new poll conducted late last month by Nanos Research for The Globe and Mail at a time when veterans, especially those who were on the troubled Somalia mission of the early 1990s, were coming forward to say they believe the medication left them with irreparable brain damage.

More than half of the poll respondents – 53 per cent – said they believe the government, and mefloquine's manufacturer, Roche, should pay for research into the possible long-term side effects of the drug, which is still being offered to Canadian troops who go to countries where the risk of contracting malaria is high. Another 7 per cent said the government should be solely responsible for that research, and 38 per cent said the responsibility is the manufacturer's alone.

Just 1 per cent of those surveyed said no one should be required to pay for more studies of mefloquine.

When asked if the government should contact all soldiers and veterans who have taken the drug to determine if it had harmed them, 45 per cent of respondents said "yes," and said they would be willing to see tax dollars spent to that end. An equal number said it should be up to the veterans to contact the government if they believe they have suffered lasting damage.

"I think it's fair to say that the 45 per cent who want the government to spend money to contact veterans who have been given the drug to determine if they have suffered harm is a good indication that they're concerned enough about the issue for the government to spend money," said Richard Jenkins, Nanos's vice-president. "And virtually everybody believes someone should be out there doing research."

The survey of 1,000 Canadians randomly recruited by telephone is expected to reflect the views of the country at large within 3.1 percentage points, 19 times out of 20.

The Liberal government has so far rebuffed requests from veterans and opposition MPs to examine the possible long-term effects of mefloquine in greater detail.

Health Canada updated the warning labels for mefloquine in August to emphasize that certain side effects can persist for months or years after the drug is discontinued and may be permanent in some patients. Symptoms reported include anxiety, paranoia, depression, hallucinations, psychotic behaviour and, in rare cases, thoughts of suicide.

Germany recently banned the use of mefloquine within its forces. Other countries, including the United States, have declared it the drug of last resort for military personnel needing protection from malaria.

Canada's Chief of Defence Staff has ordered senior health officers to review the scientific literature on the drug. But senior military personnel remain skeptical of claims that mefloquine causes long-term damage, except in the rarest of cases. And the military's surgeon-general has said there is not enough evidence that the drug is a problem to justify spending money on research.

Many of the soldiers who were given mefloquine in Somalia as part of a clinical trial that was poorly administered and possibly illegal reported the types of symptoms mentioned in the Health Canada warning. Some blame the drug for the violence that erupted on a night that saw Canadian troops beat a 16-year-old Somali to death.

A long-running inquiry into what is known as the Somalia Affair was cut short in 1997, in the week before the investigation was to explore the impact of mefloquine.

"I am going to push specifically, again, for reopening the Somalia inquiry on the basis of what is now known," said Cathay Wagantall, a Conservative MP and a member of the Commons Veterans affairs committee, which has heard testimony from veterans who say mefloquine has ruined their lives.

The survey's findings are being released as the parents of a soldier who took his own life in 1994 are demanding that federal cabinet ministers apologize for the loss of their son, who was prescribed mefloquine in Somalia and then again in Rwanda, where he died.

Val Reyes-Santiesteban and Wayne Smith, the parents of Corporal Scott Smith, asked last week for Defence Minister Harjit Sajjan and Health Minister Jane Philpott to apologize on behalf of their departments, which a 1998 Auditor-General's report said conducted the clinical trial without obtaining the required consent of the soldiers or monitoring for adverse effects.

Ms. Reyes-Santiesteban is also calling on the government to ban mefloquine for soldiers or to declare it the drug of last resort. The government, she said, must overcome the "unrepentant culture of denial regarding the drug's inherent dangers."

What you need to know about antimalarial drug mefloquine
November 21, 2016
Canadian Forces firm on anti-malaria drug ahead of Africa mission
December 5, 2016
Tories call for ‘immediate action’ to study effects of anti-malarial drug
November 22, 2016 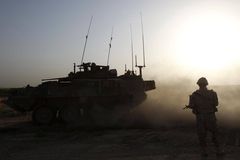