In a badly managed attempt to appease the student protest, the Quebec government threw the universities under the bus.

The basic idea of the deal struck a week ago with the student leaders (who were chaperoned in these discussions by the heads of Quebec's three major labour federations) was that the universities' spending would be scrutinized by a committee where student representatives and their allies from the labour unions would have eight delegates (two more than the universities), and that any money saved would be used to diminish ancillary fees, thus partly offsetting the increase in tuition fees.

Instead of being reinvested into the cash-strapped universities, the money saved would lower the contribution of the students – whose tuition fees, even with the modest hike proposed by the government, would still remain by far the lowest in Canada.

So here is a government that, after claiming for years that Quebec universities were tragically underfunded, hands them the bill that the students refuse to pay, thus lending credence to the student leaders' flawed argument that they shouldn't pay more for their studies because there was a great deal of misspending in universities and "millions" could be saved.

By subjecting them to a committee largely made of uninformed students and biased union activists, the government not only infringed on the autonomy of the universities, it humiliated the university administrators, now suspected of throwing money out the window.

It was the third conciliatory move by the government since the beginning of this standoff, which is entering its fourth month, against a background of violent demonstrations, widespread vandalism and disruptive attacks on Montreal's transit system. As for the student leaders, they never moved an inch from their original demand for a freeze on tuition fees.

The amazing thing is why a government, which had, on this issue, the support of an overwhelming majority of the population, felt the need to make more compromises – to no avail, anyway, since the agreement has been rejected by the students' associations that are on strike. As usual, the rules of these meetings were designed to intimidate the dissidents, and the votes were taken by shows of hand, as well as by secret ballot.

Even though they signed the agreement, the student leaders refused to "sell" it to their members, and one of them, the "negotiator" for CLASSE, the most radical group, reneged on his own signature, arguing that he hadn't read the whole text. These are the kinds of people who would become the ultimate arbitrators of university governance if the committee planned in the so-called agreement ever sees the light of day.

As for the most radical group, CLASSE, it wants to cut down spending on research. True to their "me, myself and I" mentality, the students who masquerade as revolutionaries want their professors to concentrate all their attention on them.

They obviously don't understand that the essential mission of a university, besides teaching, is to contribute to research. But of course, for the likes of CLASSE activists, our universities are not worth protecting since, in their view, they only serve to reproduce the capitalist system.

The radical students don't care about the universities. The sad thing is that it seems that the Charest government doesn't either.

An earlier version of this column contained incorrect information about the students' demands and the process by which they voted on the agreement with the Quebec government.

Opinion
University quality was forgotten in Quebec's drama
May 9, 2012 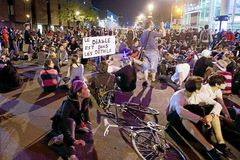