She pushed boundaries and took risks, and her vision of Canada became predominant on the court she led, and in the country. On or off the court, Chief Justice Beverley McLachlin was not afraid to take a stand – whether in accusing Canada of committing cultural genocide against Indigenous peoples in a speech (two years ago), or in defending herself publicly in an unprecedented dispute with a sitting prime minister (three years ago), or in declaring laws unconstitutional and striking them down (on a regular basis for 28 years). And whether those laws harmed the vulnerable or protected the vulnerable, she would take a constitutional hatchet to them if she felt they went beyond what the Charter of Rights and Freedoms allows.

And there was no area of law – criminal, constitutional, administrative, Indigenous – on which she did not assert herself, as a prolific writer of judgments, year after year. "Her hand is on every area of our law in Canada," Benjamin Berger, a former law clerk for the Chief Justice, said in an interview.

The country's longest-serving Supreme Court chief justice, appointed by prime minister Jean Chrétien in 2000, and to the court by prime minister Brian Mulroney in 1989, announced on Monday that she will retire, effective Dec. 15, nine months before she reaches the mandatory retirement age of 75.

Her retirement gives Prime Minister Justin Trudeau the opportunity to make his second appointment to the court – possibly even the first Indigenous appointee – and to name a new chief justice, and thus deepen his imprint on the country's top court.

The daughter of ranchers from Pincher Creek, Alta., Chief Justice McLachlin was the first woman to hold the position, third woman named to the Supreme Court, after Bertha Wilson and Claire L'Heureux-Dubé, and the first to say she had not encountered discrimination as she broke into the legal profession.

She announced her presence in the early years on the court by taking a strong stand in dissent against the protective vision of Canada set out by then-chief justice Brian Dickson on freedom of speech and the safeguarding of minorities. When Alberta schoolteacher James Keegstra was charged with promoting hatred for teaching his students the Holocaust never happened, she wrote a dissent in favour of striking down the criminalizing of hate speech, in 1990. She lost that one.

But then she wrote for the court's majority in a 1991 case striking down the rape-shield law, which protected sexual-assault complainants from being questioned about their past sexual behaviour. The law as written was unfair to the accused, she wrote in R v Seaboyer; the government was obliged to write a new one.

Thus, her career started as a disappointment to women's rights advocates. "None of us was naïve enough to think that the new women judges would always rule in favour of women's issues," Constance Backhouse, who holds the University of Ottawa chair in sexual assault law, said in an e-mail. "But I think it is fair to say that many of us were very disappointed when Justice McLachlin wrote her decision striking down the protections that Parliament had passed." Even so, Justice McLachlin showed she could not be easily pigeonholed – dissenting, along with Justice L'Heureux-Dubé in the Symes tax case in 1993 on whether childcare was a legitimate business expense.

And over the years, some court-watchers say, she evolved from a classical liberal determined to limit state intrusions on individual rights to a judge with an eye to the effects of laws on vulnerable people, and a leader in writing about issues involving mental illness. This was where her vision of Canada took hold – of a country in which government does not foist harms on the vulnerable, be they sex workers, drug addicts or the severely ill seeking a way out from "the sanctity of life."

"Her later decisions, in particular – whether in relation to physician-assisted dying, prostitution, labour relations, aboriginal rights, or other issues – reveal a conscious ambition to understand issues from the perspective of those most vulnerable," Joel Bakan, who teaches at the University of British Columbia's Allard School of Law, said by e-mail.

"In two prominent cases she wrote that Aboriginal peoples were never conquered, and that the doctrine of terra nullius (empty land) never applied in Canada," he said in an e-mail. "Furthermore, in a public speech she noted that Canada attempted cultural genocide against Aboriginal people, and she called upon Canadians to learn from the mistakes of the past. These statements will long be remembered."

The court repeatedly, in her years as Chief Justice, overturned major precedents. It created a constitutional right to unionize – overturning a 1987 ruling. In striking down a Criminal Code ban on assisted dying, it rejected its 1993 ruling (she had written for the dissent) as outdated. When it struck down prostitution laws, it rejected a ruling from 1990. And Chief Justice McLachlin told trial judges that they could reject Supreme Court precedents if social change required it.

"This comes from her sense that the law has to continue to live," said Prof. Berger, associate dean at York University's Osgoode Hall Law School. "We don't want a system of law that becomes frozen and rigid."

Her strong attachment to the Charter of Rights, the stuff of countless speeches she gave around the world, was clear in a 1996 dissent in a case called Cooper v Canada. "The Charter is not some holy grail which only judicial initiates of the superior courts may touch," she wrote. "The Charter belongs to the people. All law and law-makers that touch the people must conform to it."

In the last years of the Stephen Harper government, the McLachlin court delivered a series of unanimous or near-unanimous rulings that struck at the core of that government's agenda; the final blow appeared to be the rejection of Mr. Harper's nominee for the Supreme Court, Marc Nadon. Soon after, Mr. Harper accused the Chief Justice publicly of trying to contact him and his justice minister to block the appointment. Through her office, she issued statements defending her actions and denying the allegations. The International Commission of Jurists took her side, and she emerged unscathed – a sign of the respect she had gained in the legal community and more broadly among Canadians.

"Beverley McLachlin will be remembered as a great Chief Justice," Robert Armstrong, a retired Ontario appeal court judge, said in an e-mail. "She has a fine legal mind, which is combined with common sense and humanity." 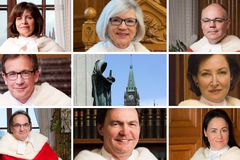