Like many Canadians, Jennifer and Evan Brown moved to the United States for work. In 2011, they jumped at the chance to live in New York when Evan, a chartered accountant, was offered a job there. After the couple had their first child a year later, they moved back to Canada, where they eventually had a second. But there's a crucial difference between their children: One has more citizenship-transmission rights than the other.

The Browns, who now live in Victoria, are affected by a law passed by the government of Stephen Harper, whereby the children of Canadian citizens born abroad cannot – with only a few exceptions – pass on their own citizenship if they also have children abroad. The provision was introduced as part of changes the previous, Conservative government made to citizenship laws. While the current Liberal government is undoing much of that legislation, it has so far not addressed the concerns of families like the Browns.

Without citizenship, an individual does not have access to many of the benefits that come with being Canadian, including the ability to travel with a Canadian passport and to vote or run for political office. It can also complicate the individual's ability to work in Canada and access all social benefits. With that much at stake for their children, Canadians born abroad may feel pressure to restrict their travels and working opportunities.

It took four years for the Browns to figure out that their four-year-old son, Jackson, born in the United States, was affected by the law. Like most children in the same circumstances, their son received a letter from the Canadian government explaining the rule, but the Browns didn't fully understand it at the time.

Ms. Brown was recently at a local playground when another parent, Roy Brooke, told her how his son, five-year-old Nathan, may not be able to pass citizenship onto his children if they are born abroad as Nathan was. Ms. Brown realized the rule probably applied to her son as well.

"I had the assumption that he'd actually have more doors opened for him having been born in the U.S., and then I felt that possibly we'd actually restricted the most important door for his children," Ms. Brown said.

The rule stipulates that someone born or adopted outside Canada to a Canadian parent on or after April 17, 2009 is not a Canadian citizen if the person's parent was also born abroad, when the provision became law. The limit was brought into force in an effort to "achieve greater simplicity and transparency in citizenship laws as well as to preserve the value of citizenship," according to Immigration, Refugees and Citizenship Canada (IRCC).

The Brown and Brooke families were not working for the Canadian government or Canadian Forces when they had their children abroad – the only exception to the rule – so their children were not exempt from the first-generation citizenship limit.

Mr. Brooke has taken the fight for the citizenship-transmission rights of children like Nathan and Jackson to Ottawa. After two years of unsuccessfully attempting to persuade the Conservatives to change their policy, he is pushing the Liberals to do so. He had his eyes set on the Liberals' Bill C-6, which aims to reverse some Conservative changes to the Citizenship Act, but was told it was too late to amend the legislation to remove the first-generation citizenship limit. The bill is currently at first reading in the Senate, where Mr. Brooke is now seeking witness status before committee and encouraging others affected to make their concerns known.

Immigration Minister John McCallum said at the end of May that he would look into the matter. His office referred further questions to the Immigration Department, which refused to speculate whether changes may be tabled in the future.

NDP immigration critic Jenny Kwan, who has met with other affected families, called the policy "discriminatory" against Canadians who choose to work abroad, especially in today's global economy.

Mr. Brooke and his wife, Sara Bjorkquist, were working in Geneva, Switzerland, when their son was born in August, 2010. Had they been aware of this law, Mr. Brooke said he and his wife would have thought twice about having children overseas. He's now concerned that Nathan may not be able to pass on citizenship to his children if he chooses to follow in his parents' footsteps and work abroad.

"My decision to serve at the UN could penalize me, my son and his offspring," Mr. Brooke said. "Three generations are hurt because we decided to live overseas for a few years and work for the UN, and that is not right."

"If [Nathan] works overseas, his children could be stateless if he works for the Red Cross, the UN or any non-federal government entity, and marries a non-Canadian," Mr. Brooke said.

In 2009, the Asia Pacific Foundation of Canada estimated that 2.8 million Canadians – or 8 per cent of Canada's total population – lived abroad. IRCC said it does not know how many Canadians born abroad are affected by the first-generation citizenship limit.

Advocacy groups, including the Canadian Council for Refugees, have called on the government to restore the right to citizenship for the second generation born abroad or at least to provide citizenship to those who would otherwise be stateless under the law.

"By denying citizenship to the second generation born abroad, Canada is creating a new set of 'lost Canadians' and making some children born to Canadians stateless," the CCR said in a report on Bill C-6. 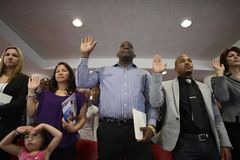