Western foreign ministers attending a Vancouver summit acknowledge that a diplomatic solution to the North Korea nuclear threat can't be accomplished without China and Russia even as they examine new measures to pressure Pyongyang to the negotiating table.

China and Russia have bluntly criticized the Vancouver talks, co-hosted by Foreign Affairs Minister Chrystia Freeland and U.S. Secretary of State Rex Tillerson, as too focused on sanctions and not enough on the need to defuse the crisis through concerted dialogue.

A senior Canadian official defended the decision to exclude Moscow and Beijing, saying this is a meeting of like-minded countries seeking to review how United Nations sanctions can be strictly enforced against North Korea.

In a background briefing for reporters on the eve of Tuesday's talks, the official said any longer-term resolution to curb North Korean leader Kim Jung-un's nuclear ambitions would have to involve Russia and China.

Both countries sit on the United Nations Security Council and are neighbours of North Korea. Prime Minister Justin Trudeau also acknowledged on Monday that the Korean conflict requires the involvement of Russia and China, and said Vancouver is simply an opportunity to look at options to "resolve the conflict."

U.S. officials have previously said Russia and China were supportive of the summit, but Russian Foreign Minister Sergey Lavrov called that an "outright lie" on Monday and said the meeting was "destructive."

He scoffed at the list of 20 Western countries invited to Vancouver, all of whom were involved in the 1950-53 Korean war.

"When we found out about this meeting, we asked: Why do you need all those countries together?" Mr. Lavrov told reporters in Moscow. "Greece, Belgium, Colombia, Luxembourg. What do they have do with the Korean Peninsula."

Last week, China also dismissed the meeting as "meaningless" and focused on efforts to "blindly resort to pressure and isolation" rather than "dialogue" with the Kim regime.

Mr. Lavrov said Canada had invited officials from Russia and China to be briefed on the talks after they concluded but they turned down the proposals. The Canadian official did not dispute Mr. Lavrov's statement but said Canada and the United States will brief China and Russia after the talks end Tuesday.

U.S. officials have said the meeting will look at ways to crack down on smuggling and money-laundering schemes that Pyongyang has used to evade UN sanctions, including the question of whether to intercept North Korean shipping.

The Canadian official did not rule out Canada's navy taking part in efforts to block ships from delivering oil and other embargoed goods to North Korea.

General Jonathan Vance, Chief of the Defence Staff, told The Globe and Mail on Friday that he has "the military capability inside the Armed Forces" to participate in any effort to ensure compliance with UN sanctions.

Foreign ministers in Vancouver will also discuss how the international community can track ships as well as blacklisting ships that break the UN sanctions embargo.

Korean experts agree that the talks will accomplish very little without China and Russia at the table.

"The Vancouver meeting will mostly focus on oil shipments because that is where the international community has some type of leverage but again it is not including the major actors on the North Korea issue and that is Russia and China, so even this goal is unlikely to be achieved," according to Agathe L'Homme, an analyst with The Economist Intelligence Unit.

Ms. L'Homme said another problem with the Vancouver summit is the lack of a clear U.S. position on North Korea. Mr. Tillerson has talked up diplomacy while U.S. President Donald Trump and hawks within the White House have raised the possibility of a military strike against North Korea's nuclear facilities.

"The big issue remains the U.S. position and that remains very unclear," she said. "To bring North Korea to the table would be to have a consistent U.S. policy and that is not the case as long as Donald Trump has access to Twitter and Rex Tillerson himself has been rumoured to be pushed out."

The North Korean leader has shown no willingness to give into U.S. demands and negotiate away his nuclear-weapons program which he sees as vital to his regime's survival.

Len Edwards, a former Canadian ambassador to South Korea, said Ms. Freeland should try to play a role behind the scenes to convince the Americans that they have to live with a nuclearized North Korea and to look for ways to defuse tensions and contain Mr. Kim's weapons programs.

"It is a tough discussion to have because no one wants to move to the admission that North Korea has reached the point where they have, in effect, reached or will shortly have all the attributes of a nuclear state whether we like it or not," Mr. Edwards said in an interview Monday.

Ms. L'Homme said it is possible North Korea could accept a freeze on its ballistic missiles and a cap on its nuclear warheads in exchange for an end to joint U.S.-South Korean military exercises and talks that lead to greater co-operation between the two Koreas on culture, sports and the economy.

But the goal of the foreign ministers' meeting is to avoid a military showdown with North Korea by taking steps to prod Mr. Kim to the negotiating table for meaningful talks. 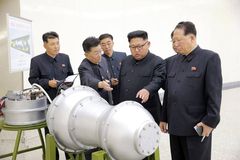 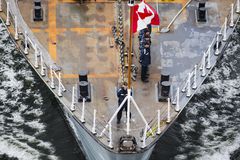 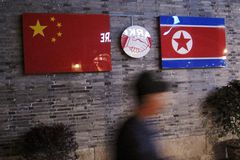