Xinhua News Agency, often used to deliver messages on behalf of the Chinese state, lauded the Sept. 6 completion of the first-ever Chinese voyage through the Arctic waterway, saying the Snow Dragon icebreaker "accumulated a wealth of experience for Chinese ships going through the Northwest Passage in the future."

Beijing's state news agency said the Arctic route through Canadian waters can reduce the delivery time for Chinese cargo ships by 20 per cent.

Canada demands that foreign vessels ask permission before sailing through the Northwest Passage. Foreign Affairs Minister Chrystia Freeland's office said last week that Canada granted its approval on the basis that China was conducting scientific research. A team of Canadian scientists were also on board as well as a Canadian navigator.

A senior government official, who was not authorized to speak on the record, told The Globe and Mail that "China may say whatever it wants to a domestic audience [but] that does not mean it reflects the reality of what happened here."

Adam Austen, the press secretary to Ms. Freeland, echoed the senior official's viewpoint, saying the Snow Dragon mission was solely a "scientific expedition" and China's desire to use the Northwest Passage for shipping is not a done deal.

"All commercial voyages through Canada's territorial waters, including the Northwest Passage require an application," Mr. Austen said. "While we permit commercial traffic through our domestic waters, we expect that ships comply with our strict laws on safety, security and the protection of the environment. All cases are evaluated on an individual basis."

Arctic expert and professor Rob Huebert, who tracked the Snow Dragon's voyage using satellite imagery, said he was surprised the Chinese were so blunt in revealing their clear intentions for the Northwest Passage.

"They are preparing for a very substantial increase in the amount of shipping. It is obvious this is going into the planning to a degree that we don't see in Western shipping companies," Prof. Huebert said. "They have given us clear notice this is going to happen."

Prof. Huebert, who teaches at the University of Calgary's Centre for Military and Strategic Studies, said he is not convinced the Canadian government is prepared to handle large-scale Chinese shipping through this waterway and to ensure China respects the Arctic Waters Pollution Prevention Act.

Environmentalists have expressed concern over the risks of increased ship traffic in the pristine Arctic, such as oil spills and sooty emissions.

For some years, state-owned Cosco – which is China's largest shipping group – has been exploring the potential of the Arctic as a new and reliable global trade route.

Using the Arctic would allow Chinese cargo ships to provide faster delivery without having to worry about monsoons in the Indian Ocean, armed pirates on other routes or paying fees to pass through the Suez or Panama canals. In early July, Chinese President Xi Jinping and Russian Prime Minister Dmitry Medvedev agreed to explore co-operation on the northern sea route to build a "Silk Road on Ice."

Chinese state media have called the Northwest Passage a "golden waterway" for future trade; 90 per cent of China's exports are by ship. China has no Arctic territory, but has been attempting to play a larger role in the region and gained observer status at the Arctic Council in 2013.

Despite concerns about the effect of increased shipping traffic on the fragile Arctic environment, there is little that Canada can do to prevent countries from using the Northwest Passage as a trade route, according to University of British Columbia Professor Michael Byers.

"If anything, Canada's legal position has been bolstered by the fact that the Chinese were so willing to work with us. They waited a whole week before they got the letter [of Canadian government approval] before entering Canadian waters," Mr. Byers said. "Every time another country works with us, they are at least implicitly recognizing that we are the state in control, that we have rights in the Northwest Passage. So this voyage is actually a good thing from the perspective of Canadian sovereignty."

Prof. Byers acknowledged though that it is in China's interest to seek Canadian approval because it strengthens Beijing's claims to the Hainan Strait, which, as with the Northwest Passage, the United States considers international waters.

The Hainan Strait is an important shipping route connecting the South China Sea to the Gulf of Tonkin and one that China claims as internal waters.

Canada claims sovereignty over the Northwest Passage based on historic title – a status conveyed by the Canadian Inuit's usage of those waters. This claim has long been challenged by the United States, which considers the passage an international strait through which Americans are entitled transit rights.

Nonetheless, the United States does notify Canada when its vessels are passing through the channel.

Prof. Huebert said it will be important for Canada to ensure that Chinese shipping companies request Canadian authorization before they venture into the Northwest Passage.

"If [China] bring containers in, the first one will be important in that they follow our procedures for requesting permission," he said. "If they start coming in and get sloppy and they start not asking for consent, then the Americans will quite rightly say you are not enforcing it and therefore it is an international straight. And that is the real danger."

With files from Xiao Xu 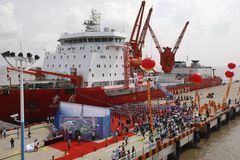 China accuses Canadian-Chinese tycoon of major role in pyramid scheme
July 28, 2017
China-focused firm invests in Ottawa-area commuter rail plan
July 16, 2017
Follow Robert Fife and Steven Chase on Twitter @RobertFife @stevenchase
Report an error Editorial code of conduct
Due to technical reasons, we have temporarily removed commenting from our articles. We hope to have this fixed soon. Thank you for your patience. If you are looking to give feedback on our new site, please send it along to feedback@globeandmail.com. If you want to write a letter to the editor, please forward to letters@globeandmail.com.
Comments