Chinese Premier Li Keqiang used a personal telephone call with Prime Minister Justin Trudeau on Tuesday to press Canada to relax controls on exports of high-technology to China, raising concerns that Beijing could get access to sensitive Western know-how.

The request from China's second most powerful leader comes just weeks after the Trudeau Liberals overturned a Conservative government cabinet order and allowed a Hong Kong company partly owned by the Chinese government to take over a Montreal technology firm.

The Harper cabinet blocked the sale of ITF Technologies to O-Net Communications in 2015 after Canada's national-security agencies warned the deal would undermine the Western military's technological edge over China. The Trudeau cabinet approved the deal last month.

Globe editorial: Canada's opportunity in China, and its dangers

A news release from the Prime Minister's Office about the conversation did not mention Mr. Li's request, but China's state-controlled news agency, Xinhua, provided a more in-depth description. "The Chinese Premier hoped that Canada would relax the restrictions on high-tech exports to China, believing this would be helpful to a balanced growth of bilateral trade," said the Xinhua story, posted on Tuesday from Beijing.

"If this relates to goods and technology currently subject to export controls, then, as with all other applications, export permits are assessed on a case-by-case basis," Chantal Gagnon said. "The assessments are specific to the goods or technology proposed for export and the identified end-use and end-user."

"The reversal of the decision on the O-Net acquisition was really unprecedented in Canada," Mr. Burton said. "Certainly, the fact the Chinese Premier is now flagging high-tech suggests the Chinese government is hoping that Canada will be transferring more high-technology that they may not be able to acquire from other countries and maybe indicating that this will be an important condition of the upcoming free-trade negotiations. … They are seeing this as something they are expecting from Canada now that we have done it with the laser technology."

Mr. Burton said the Prime Minister must be cautious in the trade negotiations that it is not bullied by Beijing to give up key technology, especially when Canada's Five-Eyes intelligence-sharing partners have restrictions on such transfer, including U.S. firms operating in this country.

"The United States, the United Kingdom, Australia and New Zealand would all be concerned if they felt classified technology was being passed on to China through Canada. I think that would really cause them to question our commitment to the alliance," he said.

A national-security expert, who spoke on condition of anonymity, said Mr. Li's request may be about relaxing controls on exports of U.S. technology to China.

Controls over defence trade prevent Canadians from exporting U.S. hardware and armaments to other countries without the consent of the Americans.

"It would mean a lot of economic harm," the expert said, if the United States were to get upset about Canada not complying with Canadian commitments under the International Traffic in Arms Regulations agreement.

"China has voiced concern over the existence of national-security review provisions and their opacity under the Investment Canada Act, suggesting that China is unfairly targeted," the 2015 briefing book said.

Canada's export-control system blocked several hundred attempts to ship military goods or high-tech items to foreign destinations in 2015, according to the department of Global Affairs. That year, which is the most recent for which the data are available, eight applications were denied and another 384 applications to export sensitive goods were withdrawn, which, according to arms-control experts, is also a measure of denials. That is because applicants usually withdraw their application when they learn it will be rejected.

China is also a significant source of imports for North Korea. "So we also scrutinize whether it is going to be used in China … and is there any indication as to whether they are front buying organization for North Korea."

Mr. Trudeau's Liberals have made free trade with China a cornerstone of Liberal foreign policy. He has opened exploratory trade talks with Beijing, seeking better access for Canadian companies in sectors such as agri-food, forest products, clean and environmental technologies, advanced manufacturing and financial services.

The next round of exploratory talks on a Canada-China free-trade deal will take place April 24-28 in Canada. China's new ambassador to Canada, Lu Shaye, laid out his country's preconditions in an interview with The Globe and Mail last month. Mr. Lu said China wants unfettered access to the Canadian economy and wants Canada to end national-security tests to block Chinese-state owned enterprises from buying Canadian firms or doing business with Ottawa.

He said he does not like to see "national security" used to block trade, calling this "the manifestation of trade protectionism."

The Chinese embassy in Canada said Beijing merely wants to see two-way trade grow. "China's vast market creates tremendous business opportunities for Canada's exports to China. The high-tech exports from Canada to China would be helpful not only to expand and balance trade, but also to raise the quality and upgrade pragmatic co-operation between the two countries," spokesman Yundong Yang said. 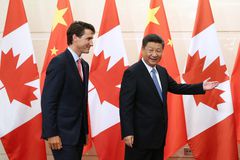 Globe editorial: Canada’s opportunity in China, and its dangers
April 3, 2017
Follow Steven Chase and Robert Fife on Twitter @stevenchase @RobertFife
Report an error Editorial code of conduct
Due to technical reasons, we have temporarily removed commenting from our articles. We hope to have this fixed soon. Thank you for your patience. If you are looking to give feedback on our new site, please send it along to feedback@globeandmail.com. If you want to write a letter to the editor, please forward to letters@globeandmail.com.
Comments