Mr. Li, the first Chinese leader to visit Canada in six years, is on a mission to forge closer ties. That included announcements to start exploratory talks on free trade, the settling of a canola dispute and pledges to double trade by 2025.

But China's No. 2 leader was adamant that high on his bilateral agenda is an extradition treaty to seek the return of fugitives accused of economic crimes. More than 40 other countries, including France and Australia, have signed such treaties, he said.

During a joint news conference on Thursday, the Premier took a swipe at Canadian critics of an extradition treaty, saying they are wrongly disparaging China's justice system as being based on torture, repression and coercion.

"There shall be no torture including suspects and sentenced people, humanitarian treatment must be applied. This is provided by Chinese law and the judicial and law authorities follow this role very strictly," he told reporters as Mr. Trudeau stood by his side in the foyer of the House of Commons.

Mr. Li said he can't "promise 100 per cent" that the odd police officer could mistreat an accused, but said anyone caught doing that would be treated "very seriously." At the same time, he argued that China's death penalty is needed to deal with violent crime.

"If we abolish the death penalty, innocent people will lose their lives," he said.

Amnesty International says China is the world's top executioner while the United Nations says China routinely uses torture, and its judges, prosecutors and the police answer to the Communist Party.

"We stand by our assessment that there are a vast array of very serious human-rights concerns," Alex Neve, Amnesty International Canada's secretary-general, said in an interview. "Torture is widespread and rampant throughout the country and backed up by near total impunity."

China's human-rights record has taken on added significance since The Globe and Mail reported Tuesday that Ottawa had opened up formal talks on an extradition treaty on Sept 12, one day before a Chinese court ordered jailed Canadian missionary Kevin Garratt back to Canada.

Critics interpret Mr. Garratt's release as a quid pro quo for Canada acceding to China's long-standing call for an extradition treaty. The lack of action on such a treaty over the past decade led China to send agents to Canada on tourist visas in an attempt to induce expatriates to return home to face justice.

The Globe and Mail reported Wednesday that the Canadian Security Intelligence Service and RCMP are investigating the covert Chinese spy operation. CSIS has interviewed Chinese citizens living in Canada, all of whom have been threatened by agents from China.

"I don't know where you got those reports," Mr. Li said when asked about The Globe report. "I can tell you firmly that China … strictly follows international law and norms and we obey the laws of other countries."

The Prime Minister said Canada would not deport anyone who would face execution but argued he was confident a formal extradition treaty could be worked out.

"We recognize that Canada and China have different systems of law and order and different approaches and it'll be very important that any future agreement be based on reflecting the realities, the principles, the values that our citizens hold dear in each of our countries," Mr. Trudeau said.

As part of the talks, both leaders approved a feasibility study on free trade with the goal of doubling bilateral trade by 2025. They also reached a four-year deal to allow for the continued exports of Canadian canola, worth $2-billion annually to Canadian farmers, and Mr. Li lifted China's ban on imports of bone-in beef from Canadian cattle younger than 30 months of age.

Conservative Foreign Affairs critic Peter Kent accused the Prime Minister of being naive if he thinks China wouldn't apply the death penalty to Chinese fugitives. "Canada has no control over what happens in Chinese prisons. The Chinese have many ways of killing people," he said.

The Prime Minister told the House the new dialogue with China allows Canada to raise serious issues with Chinese leaders including consular cases and provides "huge opportunities for Canadian businesses."

Mr. Trudeau has gone out of his way to welcome Mr. Li to the capital. When Mr. Li and his wife arrived Wednesday night, they were invited to the prime ministerial retreat at Harrington Lake. A photo released by the PMO showed the leaders overlooking the lake with glasses of beer.

A dinner was held for Mr. Li at the History Museum Thursday night. On Friday, Mr. Trudeau accompanies the Premier to Montreal where they will speak to the Canada-China Business Forum. 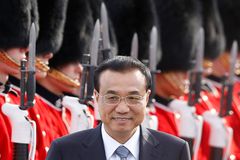 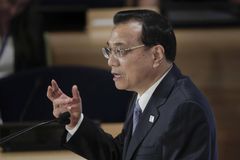