For much of his life, Senator Pierre Claude Nolin was a model of Tory partisanship. He was campaign strategist for Brian Mulroney and Jean Charest. He helped Stephen Harper win the 2006 election. He was a leader in the backrooms of conservative politics in Quebec for three decades. Yet, during the short time he was Speaker of the Senate, Mr. Nolin tried to loosen the partisan shackles that constrain his colleagues. And, as a parliamentarian, he followed the directives of his heart even when they were at odds with those of the Conservative leadership.

Mr. Nolin died on April 23 at the age of 64 of pancreatic cancer, a disease that afflicted him for nearly five years.

Despite his illness, he very much wanted the job of Speaker of the Senate when it was offered to him last fall. He wanted to spend his final days reforming the chamber, trying to repair a reputation that has been tattered by allegations of misspending, entitlement and excess.

"It's amazing how much energy he found as a result of his love for the institution," said Mr. Nolin's long-time friend Leo Housakos, another Conservative senator who has been acting as speaker since Mr. Nolin's death.

"I think he has accomplished more in the last five months than anyone could have imagined, in the sense of starting the administrative reforms of the institution," Mr. Housakos said. "It's amazing. With what he was going through, he led the way."

Mr. Nolin was born into a devout Catholic family in Montreal on Oct. 30, 1950. His father, a lawyer, was active in conservative politics.

When the younger Mr. Nolin obtained his driver's licence at the age of 16, his dad conscripted him to ferry voters to the polls during a provincial election. The political light inside Mr. Nolin was turned on.

He followed his father into the practice of law. And, appropriate for a man who was known as PC to his friends, he became a committed Progressive Conservative.

He represented the Conservatives at a provincial bargaining table during the 1980 referendum on Quebec sovereignty. A number of Liberals were present and, as he explained later, it was during those sessions that he began to identify the Liberal Party's weaknesses – an insight that would serve him well in the coming years.

The Progressive Conservatives had emerged from the 1980 federal election with just one seat in Quebec. Mr. Nolin was determined to change that.

In the 1983 race to lead the PCs, he played a major role in Brian Mulroney's defeat of Joe Clark.

During the federal election the following year, Mr. Mulroney told The Globe and Mail that Mr. Nolin "was one of the key Quebec architects, when we went from one seat to 58 seats, and then in '88 when we went to 63 seats in Quebec. He was always a vital cog in the organizational side."

Those who worked for him sometimes found him intimidating, Mr. Housakos said.

Mr. Nolin had a "certain aura about him," Jean Charest agreed. "He was tall and quite heavy at that time and serious and determined – a very good organizer."

Mr. Nolin played a large part in Mr. Charest's campaign for the Tory leadership in 1993, a battle that was won by Kim Campbell.

The two men worked together during the second referendum on sovereignty in 1995 when Mr. Nolin's abilities "allowed us to punch above our weight," Mr. Charest said.

Then, in 1997, when Mr. Charest led the party in a federal election, Mr. Nolin was his Quebec organizer, the Tories picked up an additional 23 per cent of the vote.

Mr. Nolin "wasn't a back-slapping, glad-handing" kind of guy, Mr. Charest said. "He wasn't someone who tried to ingratiate himself to his colleagues. He could have quite a severe look about him. He was serious and determined."

But Mr. Mulroney said Mr. Nolin had a keen sense of what was happening on the streets of Canada, which made him a trusted source of counsel.

"When I was coming to the end of my terms, I had saved a seat in Quebec and I had decided I wanted to elevate Pierre Claude to the Senate," Mr. Mulroney said. "I did it because he was a man of uncommon integrity, he was a person who felt for Canada in a deep way, he was an authentic voice for Quebec."

Mr. Nolin was also a devoted husband to his wife, Camille, and caring father to their three children. Several of his colleagues said he provided sage advice on how to make a marriage work despite the strains of politics

When he was appointed to the Senate in 1993, he was the youngest member of the Red Chamber, at the age of 42.

Many of his fellow senators thought he would last only a short time and move on to something more dynamic.

And he did do other things. For a while, in addition to his Senate duties, he was the general rapporteur for NATO. But he remained a senator for nearly 22 years, many times demonstrating his willingness to walk his own path on policy when his ideas diverged from that of his party.

It was Mr. Nolin who chaired the Senate committee that, in 2002, tabled a 600-page report that shocked the nation by saying marijuana should be legalized.

"Scientific evidence overwhelmingly indicates that cannabis is substantially less harmful than alcohol and should be treated, not as a criminal issue, but as a social and public-health issue," he said at the time.

Nine years later, he refused to support a Conservative omnibus crime bill because of the punishments it proposed for marijuana possession.

Mr. Nolin was also a supporter of supervised injection sites for heroin users, something his Conservative Party has adamantly opposed.

But, he was never far from the backrooms of politics in Quebec.

"He believed in elections being very tough and rugged and he was very partisan in supporting his party in the electoral battles," Mr. Housakos said. "And then when those battles were over, he had a deep, deep, deep appreciation for the Westminster model of Parliament and he understood that there has to be strong debate."

Indeed, Mr. Harper's decision to appoint Mr. Nolin to the Senate Speaker's chair despite his advancing illness was happily received on both sides of the House.

Mr. Nolin said his aim was to give senators "relative independence" – to reduce their partisanship and to free them from the need to follow the direction of their House of Commons counterparts.

"He was an intelligent enough man to know that, due to his health conditions, he was on borrowed time and he used that time to the maximum in order to serve the institution, his colleagues, and he did it in the most selfless manner," Mr. Housakos said.

About two years ago, 40 or 50 Conservatives gathered at a Montreal restaurant called Le Mas des Oliviers, which is a regular meeting place for politicians of a blue stripe.

Their purpose was to honour Mr. Nolin before cancer could take him. Mr. Mulroney was the main speaker.

"I saw a look on his face of perfect happiness," Mr. Mulroney said. "He was surrounded by his family, his friends with whom he has grown up in politics, and it was a joyful, celebratory mood and he was just thrilled with the fact that this recognition was coming to him, as he said later, while he could still listen to it."

Mr. Nolin leaves his wife, Camille; his three children, Simon, Louis and Virginie; and his grandchildren. 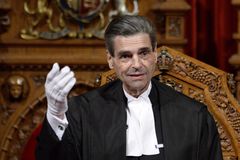 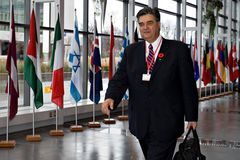