Senator Mike Duffy's credibility was the last bit of evidence on trial Monday as the Crown closed its case against the former Conservative star, alleging he exaggerated or altered stories to suit his own interests.

In his closing remarks to Justice Charles Vaillancourt, Crown prosecutor Mark Holmes accused the former broadcaster of "recklessness" while testifying.

"He's not reliable and he's not at all concerned, it would seem, about just conjuring up facts," Mr. Holmes said.

"It may work in broadcasting, but it is outrageous for a witness to do that at a criminal trial."

Mr. Duffy has pleaded not guilty to 31 charges of fraud, breach of trust and bribery, in a trial that has stretched out since last April – outlasting the federal election, which saw the Conservatives lose power.

Mr. Holmes pointed to several remarks Mr. Duffy made while testifying that are now in question, including numerous allegations of former prime minister Stephen Harper mistreating others.

"It turns out that was a bluff, and when his bluff was called … he wouldn't answer," Mr. Holmes told the court.

Donald Bayne, Mr. Duffy's lawyer, called the Crown's evidence "thin and insubstantial," and reminded the court the Crown must prove its case beyond a reasonable doubt.

He has repeatedly said the Senate rules were vague and unclear, and while Mr. Duffy may have made administrative errors, he had no intention of defrauding the public.

Both sides have submitted hundreds of pages of closing statements for Justice Vaillancourt to consider before making his verdict. Mr. Bayne will make his final pitch to the judge on Tuesday.

Most of Mr. Duffy's charges have to do with his living- and travel-expense claims as a senator.

But Mr. Holmes and his colleague, Jason Neubauer, honed in on six charges that relate to $65,000 in Senate contract money Mr. Duffy paid to a friend, and the three bribery-related charges Mr. Duffy faces for accepting $90,000 from Mr. Harper's ex-chief of staff, Nigel Wright. Mr. Bayne has said his client was coerced by the Prime Minister's Office into going along with the repayment scheme.

Mr. Holmes alleges Mr. Duffy set up a "slush fund" with his friend Gerald Donohue, in order to funnel money intended for Senate work into services for Mr. Duffy's personal uses, such as a makeup artist or personal trainer.

"It's understandable why it's paid for out of the slush fund set up with Gerald Donohue. Because in no world would anyone approve these expenses if they had been submitted in the orthodox form," Mr. Holmes told the court.

Although Senate administration approved Mr. Duffy's expenses, they did so under the belief he was acting honourably, Mr. Holmes said.

"I think you can hardly be faulted if you are essentially tricked or deceived," he said.

Mr. Neubauer told the court that it was Mr. Duffy's idea to ask for money to repay his $90,000 in expenses, and that he laid out the conditions – such as approving media messages and getting assurances he could stay on as a senator for PEI.

"The notion that he would accept money is one that he introduced into the negotiations and one that he insisted on," Mr. Neubauer said.

While the political circumstances surrounding the $90,000 are important context, Mr. Neubauer said what matters to the charges is that Mr. Duffy got the money.

"The crime alleged is that he accepted all that money from Nigel Wright. That's the crime." 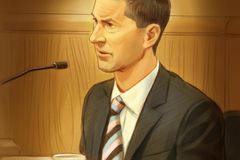 Duffy says he faced threats from Harper’s team over expenses 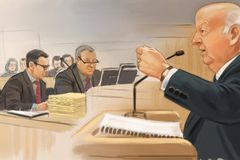