The Speaker of the House of Commons has flatly rejected Conservative procedural arguments in order to protect MPs' roles in holding to account a majority government.

The latest Conservative omnibus budget bill — which cleared its final vote Wednesday in the Senate — sparked a procedural battle over how many separate votes the opposition could force, and which MPs would be allowed to propose changes.

"Let me be clear," Mr. Scheer ruled. "The Speaker does not make decisions based on who is in control of the House."

Peter Van Loan, the government House leader, had argued that since the Conservatives hold a clear majority in the Commons, the outcome of votes was preordained.

Mr. Van Loan said the Speaker should have bundled all the opposition deletion motions together in the interests of speed and efficiency.

"This line of reasoning, taken to its logical end, might lead to conclusions that trespass on important, foundational principles of our institutions — regardless of its composition," Mr. Scheer responded.

Mr. Scheer's ruling stressed that holding governments to account is an indispensable privilege of elected MPs, and reminded Mr. Van Loan that Canada has a "parliamentary democracy, not a so-called executive democracy nor a so-called administrative democracy."

Mr. Van Loan had also argued Independent MPs — such as Green party Leader Elizabeth May — should introduce amendments at the committee that studies legislation, not at report stage when the full House votes.

The Conservative House leader claimed a single Independent MP could "hold the House hostage in a voting marathon."

Mr. Scheer shot down that line of argument as well, noting the rules expressly state that report stage is when non-committee member MPs can ask the House to consider amendments.

"It is no secret that Independent members do not sit on committees in the current parliament," said Mr. Scheer.

However the rules do allow committees — currently dominated by Conservatives — "wide latitude" to deal with legislation. Committee MPs could have invited Independents to make their views known, said the Speaker.

Noting that "simple and straight-forward solutions are not being explored," Mr. Scheer ruled that he "intends to continue to protect the rights of Independent members to propose amendments at report stage."

Bill C-45 is the second of two massive Conservative budget implementation bills that have been forced through the House of Commons this year, altering hundreds of separate pieces of legislation.

Critics are howling that C-45 guts the Navigable Waters Protection Act to remove thousands of lakes and streams from federal protection under that law.

Among other provisions, it also extends a hiring credit for small businesses, changes land management on aboriginal reserves, gives pay raises to judges and clears environmental and regulatory hurdles for a new bridge between Windsor, Ont., and Detroit.

A young Stephen Harper once castigated the Liberal government of the day for bringing in a considerably smaller omnibus bill.

"Mr. Speaker, I would argue that the subject matter of the bill is so diverse that a single vote on the content would put members in conflict with their own principles," Mr. Harper, then a Reform party MP, argued in the Commons in 1994.

"In the interest of democracy I ask: How can members represent their constituents on these various areas when they are forced to vote in a block on such legislation and on such concerns?"

Mr. Scheer concluded his ruling Wednesday by inviting all MPs to use the holiday break "to reflect on how best to strengthen public confidence in this institution and on how best to balance the competing interests with which we always grapple."

Speaker turns off microphone in wake of Commons dust-up
December 6, 2012 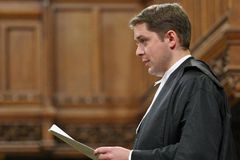 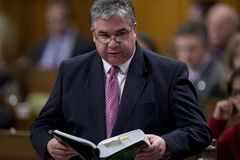