A company owned by Stephen Carter, who has been hailed as a rainmaker for propelling underdog candidate Alison Redford into Alberta's premier's office and is now her chief of staff, has defaulted on almost $600,000 in court-ordered judgments.

Mr. Carter's now defunct Calgary-based firm, Carter McRae Events, organized a 2009 visit to the city by the Dalai Lama, but was later sued by the University of Calgary and two other companies for losses related to the event.

Judgments filed against Carter McRae, which Mr. Carter operated with his wife, Heather McRae, were rendered in the spring of 2010, and writs of enforcements were issued for a total of $568,663.30. But not a penny has been paid, according to all parties involved.

"You never want anything like that to happen, but it did," Mr. Carter said, "There was precious little we could do. We certainly apologized to our creditors. To this day, we have good relationships with some and we have bad relationships with others. I don't begrudge them that. That's their choice."

Mr. Carter was the campaign manager for Ms. Redford, who Progressive Conservative Party faithful picked last weekend to replace Ed Stelmach as leader. She will be sworn in as premier on Friday. A year ago, Mr. Carter was the political strategist behind the campaign that brought Naheed Nenshi into office as Calgary's first Muslim mayor.

According to documents filed with the Court of Queen's Bench, Carter McRae owes $406,216.49 to the University of Calgary, which hosted the event featuring former South African leader F.W. de Klerk and singers k.d. lang and Bryan Adams. Another $91,495.51 is owed to Stampede Entertainment Inc., while $70,951.30 is still outstanding to AVW-TELAV Audio Visual Solutions.

"There isn't much that can be done," said Dan Finley, president and chief operating officer of Stampede Entertainment. "The company is insolvent."

Mr. Finley said the circumstances raise concerns about the business savvy of the new premier's chief of staff. "It absolutely questions that," he said.

"It's a very unfortunate situation. We've had to move on," he added.

Janet Bennett, the western Canada regional director for AVW-TELAV, said her company has not recouped any money.

Within 60 days of their appointment, MLAs and senior public servants in Alberta must file a financial disclosure outlining their business interests, including liabilities and legal proceedings, with the Office of the Ethics Commissioner. The commissioner will then determine if there are any concerns raised under the Conflicts of Interest Act or the Code of Conduct and Ethics for the Public Service of Alberta, and if any disciplinary action is required.

Since Mr. Carter has not filed his paperwork, it's too premature to assess the situation, according to Brad Odsen, lawyer for the commissioner's officer.

And even if there are concerns about potential conflicts, while the ethics office has investigated 26 MLAs since 1992, probes into senior public servants are protected by privacy rules.

"The information under the act I have to keep confidential," Commissioner Neil Wilkinson said.

Mr. Carter, who launched BBOLD Public Relations soon after Carter McRae went insolvent (it never filed for bankruptcy), said he sees no reason for ethical concerns even though the province holds the purse strings for the University of Calgary. "No, why would it?" he said.

In a statement, the University of Calgary said it has not recovered any money in connection with the lawsuit and added that "no judgment was issued against Mr. Carter personally.

"The University of Calgary looks forward to working closely with premier-designate Redford and her team," the statement said.

"It was messy, messy all around," he said.

With two big political wins and a new appointment, Mr. Carter appears to have landed on his feet.

During the fiscal year ended March 31, 2011, the chief of staff position brought home a salary of $304,123, according to public records. 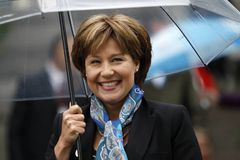 Alison Redford brings lone-wolf Alberta back into the fold
October 4, 2011 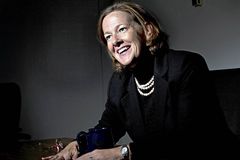 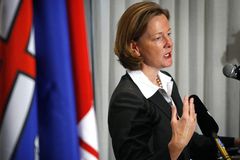 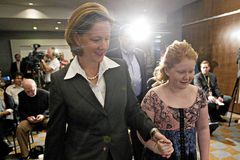 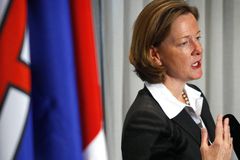