The Conservatives are pulling out all the stops in a bid to steal Scarborough-Agincourt away from the Liberals, including giving the Toronto riding's former Liberal MP a starring role in their latest attack against Justin Trudeau and his plan to legalize marijuana.

The governing party has blanketed the riding with a flyer that features a photo of Jim Karygiannis and a quote from him: "This is not the same Liberal party we knew. The party has changed."

The flyer attributes the quote to "your former Liberal MP of 25 years" explaining why he decided to resign last April, triggering a byelection on June 30.

The flip side shows a photo of an unsavoury-looking Trudeau, sporting a goatee, superimposed on a picture of young boy lighting up a joint. Trudeau appears to be standing in a haze of smoke.

In fact, Trudeau argues that legalizing, regulating and taxing pot would help keep it out of the hands of children and starve organized crime of its lucrative marijuana trade.

Microscopic print reveals that the flyer was "authorized by the registered agent of the Conservative Party of Canada." But Karygiannis believes it was intended to appear as though it came from him.

"This is an all-time low for the Conservatives," he said in an interview, calling the flyer a "very low and distasteful attack" that misrepresents him and his reason for leaving federal politics.

Karygiannis said he's still a member of the Liberal party and has endorsed Arnold Chan, the Liberal candidate in the riding. He's been trying to stay out of the byelection contest but said the Conservative flyer has "made me want to go vote for Arnold twice because of what they did."

When he announced his resignation in April, Karygiannis said he wanted to be closer to his family and that he intends to run for a spot on city council in this fall's municipal election.

The quote used in the flyer comes from an interview Karygiannis gave the Globe and Mail some weeks later and had nothing to do with Trudeau's marijuana policy. He was reminiscing about his reputation as a bare-knuckle political organizer, particularly among ethnic communities, and bemoaning what he sees as the current tendency to eschew hardball tactics and take ethnic groups for granted.

Scarborough-Agincourt is one of the most ethnically diverse ridings in the country and has been a Karygiannis fiefdom since 1988, although his margin of victory in the last election slipped to less than 5,000 votes ahead of the Conservative.

While he insisted he's fully behind Chan, Karygiannis said Trudeau's marijuana policy and his recent decree that all Liberal candidates must be willing to support a woman's right to choose in any vote on abortion "doesn't sit well" with many constituents in the riding.

"You've got to remember this area where I'm in is very traditional families, pro-life, heterosexual marriage, you know husband and wife, and there's a lot of churches ... This is a law and order community," he said.

So, while the Conservative flyer was "very low," Karygiannis said, "It has the possibility of hurting Arnold."

The Conservatives have been playing down their chances of stealing the riding, going so far as to suggest their candidate, elementary school teacher Trevor Ellis, will be lucky to get his deposit back. But they've been flooding the riding with high-profile party emissaries.

Scarborough-Agincourt is one of four federal ridings up for grabs in byelections on June 30. Another Toronto riding, Trinity-Spadina, and two in Alberta, Fort McMurray-Athabasca and Macleod, are also in play.

The Conservatives are widely expected to easily hang on to their two Alberta seats. Trinity-Spadina, left vacant when New Democrat Olivia Chow resigned to join the race for Toronto mayor, is a fight between the NDP and Liberals.

The Conservatives have targeted Trudeau's marijuana stance before.

During a tight byelection in Manitoba's Brandon-Souris riding late last year, Prime Minister Stephen Harper personally waded in to the fray just days before the vote with a letter to constituents which, among other things, asserted that "Justin Trudeau's plan to legalize marijuana will make it more accessible to our kids and encourage recreational drug use."

A Tory flyer distributed in that campaign claimed the Liberals would make marijuana "more available to minors."

The Tories ultimately hung onto Brandon-Souris, a longtime Conservative fortress, but just barely eked out a win over the Liberals.

The Scarborough-Agincourt flyer takes the attack a step further, directly accusing Trudeau of wanting to sell marijuana in local stores.

Long-time MP Karygiannis: ‘This is not the same Liberal Party we knew’
Subscriber content
April 28, 2014 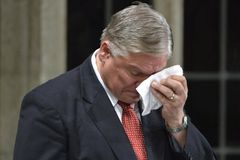 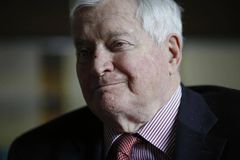 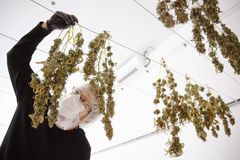