A new poll shows the extent to which Stephen Harper's Conservatives overwhelmed their rivals with television advertising leading up to last weekend's official start to the federal election campaign.

But it also suggests that, to the extent that Canadians saw other parties' ads, the efforts of Thomas Mulcair's New Democrats proved more effective than those of Justin Trudeau's Liberals.

In a survey conducted at the end of July, in which it showed parties' ads to an online panel of more than 1,400 randomly selected Canadians and tested their responses, 72 per cent of respondents told Innovative Research Group that they had previously seen the Conservative ad in which actors portraying a job-interview panel critically review Liberal Leader Justin Trudeau's application to be prime minister. (Each respondent was shown three out of seven ads total, including those from third parties; the ads were rotated so that each was viewed by 600 people.)

Only about a quarter of those who were shown the ads said they had seen the NDP spot that culminates in Mr. Mulcair addressing viewers from a coffee shop and the Liberal one in which Mr. Trudeau mingles with a middle-class family, which were the pre-writ spots in which those parties most heavily invested. That was not far off from the 21 per cent who said they had seen a second and more positive Conservative ad, in which Mr. Harper talks about the responsibility of being prime minister.

The polling company gauged how the ads affected perceptions of the leaders and parties by asking a series of questions before and after showing them. Innovative Research managing director Greg Lyle said on Wednesday that it was difficult to test the "interview" spot in that manner because it was already so well known, although among a small number of previously unfamiliar respondents it did appear to boost Conservative support at the Liberals' expense. But the tests of the other ads yielded more telling results.

By contrast, screenings of the Liberals' ad did not cause statistically significant changes in either vote intentions or perceptions of the leaders. Its only notable impact was to boost by five percentage points the share of respondents who agreed that it's time for a change in government.

The Conservatives' more positive ad also fell flat, other than upping by five percentage points the share of respondents who said Mr. Harper most "cares about people like me," but it was clearly not the one in which their party put the most stock.

Mr. Lyle, a former political strategist for parties that included the British Columbia Liberals and Ontario Progressive Conservatives, acknowledged his surprise that the NDP ad tested better than the Liberal ad. Among those spots, he said, only the Liberal one has the party leader interacting with other people and backing up his message by mentioning specific policies, both of which are often effective.

"My hunch is that Canadians feel they know Justin Trudeau better than they feel they know Thomas Mulcair, and the Liberal ad doesn't give people anything they think they didn't already know about Trudeau," Mr. Lyle said, stressing that he did not test that in this survey.

As for third-party ads, which will rarely be seen now that the official start of the campaign has caused spending limits to kick in, 20 per cent of respondents who were shown an anti-Conservative spot from the union-backed Engage Canada said they had seen it before. Support for the Tories went down by six percentage points after it was shown, and it put a modest four-point dent in the percentage who said Mr. Harper most cares about people like them.

The lone radio ad tested in the survey, one of several aired by the Conservative-friendly Working Canadians attacking Mr. Trudeau, was recognized by 17 per cent of respondents. Among those who were played it, it caused a five-point drop in both Liberal support and identification of Mr. Trudeau as the leader who will stand up for the middle class.

Full results from the survey and detailed methodology will be posted to the polling company's website (innovativeresearch.ca) on Thursday morning. 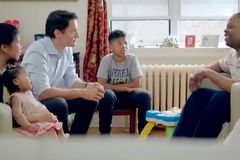 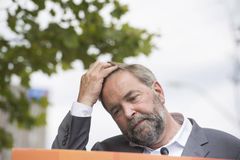