Conservative MPs have slowed down a bill brought forward by a Liberal suffering from a fatal neurological disease, leading many of his colleagues to fear he won't live to see it play out in Parliament.

Liberal MP Mauril Belanger, who suffers from ALS (amyotrophic lateral sclerosis), known as Lou Gehrig's disease, made his way to Parliament Hill from hospital on Friday to talk about his private member's bill that proposes to make the national anthem gender neutral.

The bill is Mr. Belanger's second attempt at changing the anthem, and it appears to have garnered enough support from both his Liberal colleagues and the opposition NDP.

Mr. Belanger, who has lost the use of his voice since his diagnosis in November, sat in a wheelchair and used an iPad to electronically project his speech in the Commons, which explained why he believes the English version of the anthem should be changed from "true patriot love in all thy sons command" to "all of us command."

"I believe we are ready to address the issue, and to ensure that our national anthem reflects the nation and the people that we really are in this 21st century," said the speech, which was also supported by NDP MP Sheila Malcolmson.

But Mr. Belanger's proposal was shot down by five Conservative MPs who, while praising his commitment to the cause, stood up to speak against the bill, and ran down the clock on the hour of debate set aside for the legislation.

"Rewriting the lyrics of our national anthem in the name of political correctness would go too far," said Manitoba Conservative MP Larry Maguire.

"Without making any light of it, maybe the botanists will be in an uproar about the shape of the maple leaf on our flag and demand it to be changed. Or some may be upset that the almighty beaver will not stop chopping down trees, so the National Symbol of Canada Act must be amended to swap out a beaver for an animal far less destructive."

When the hour of debate was up, the Liberals asked that it be extended in order to move the bill to the next stage of the parliamentary process – which would be a committee study.

But the Conservatives said no, and that means the bill will fall down to the bottom of the pile. Liberal MP Greg Fergus, who asked for the debate to be extended in order to keep Mr. Belanger's bill going, said it won't be considered again until September 19 unless another MP switches spots with him.

"It's ridiculous. It's unacceptable," Mr. Fergus said after the vote.

"[Mr. Belanger] has ALS. There's no guarantee he's going to be here on September 19, and they know that."

Mr. Fergus said the bill has widespread support from both the Liberals and the NDP, so it is inevitable it will make it to the committee stage at some point.

"So why not do it while the man is capable and is here to see it? That is what I don't understand," Mr. Fergus said.

"[The Conservatives have] got to really look deep within themselves to figure out what they just did today."

Conservative MP Karen Vecchio, who gave one of the speeches against the bill, said the issue is "really, really important" to her and her Conservative colleagues.

"We were the only ones putting up debate in the first place, there was no other speakers from the other sides," she told reporters, as she left for the airport.

He said Mr. Belanger, whose condition has deteriorated dramatically in recent weeks, hoped to do something meaningful for Canadians with the bill.

"He wants to do this. There was worry whether or not he would be able to. Probably still is." 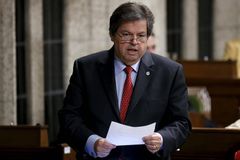