The critics are already legion and will multiply well into 2016.

Just past 100 days into a fresh mandate, the Quebec government is making few new friends after adopting a budget and ongoing spending and taxation reviews that promise austerity for the first half of Philippe Couillard's mandate.

Fiscal hawks in Ontario, disappointed by Kathleen Wynne's go-slow approach to reining in the province's $12.5-billion deficit, can look to criticism of Quebec's plan to tackle a $2.4-billion hole to understand her caution.

Film special effects company Technicolor is reconsidering an expansion in Quebec because the government has cut the film tax credit for visual effects to 36 per cent from 45 per cent. Property owners in Montreal were outraged to discover a provincially funded subsidy for renovations has disappeared. Public-sector unions representing 400,000 workers are girding for a fight heading into contract negotiations.

"The vast majority of citizens are completely convinced something has to be done, that we cannot delay any further," Mr. Coiteux said in an interview. "Our debt is too high. We spend more to service the debt than we do on schools. This is completely unacceptable and has to change."

Over the month since the Liberals introduced a budget aimed at trimming the deficit, school boards, medical specialists, advocates for social housing, the high-tech sector, mayors and entertainers have voiced opposition.

"It's irresponsible. We are being suffocated," said Sylvain Levesque, who runs an 80-place subsidized daycare and represents the province's private daycare operators. The association is planning protests for the fall because of a 2.8-per-cent cut in funding, he says.

Quebec's heavily subsidized daycare typifies the kind of choice facing the province. The program is regarded as a success, helping women return to work and providing high-quality care, but it costs the province $2.3-billion a year. The universal $7-a-day fee parents pay is considered a cornerstone of a system that mixes social classes and offers relatively uniform service levels.

Mr. Levesque pointed to an economic study from two years ago that showed the daycare system returns more money to public coffers than it takes out. "We have quality that is the envy of North America, and it makes money," he said.

Still, can Quebec afford it? In a province that holds dear to government services, Mr. Coiteux will face that question over two years in a continuing review that will recommend trimming or eliminating programs that are too costly or not effective enough.

Mr. Coiteux and many other economists say Quebec is turning a dangerous corner this year as the taxpaying work force in the province starts to shrink. Difficult demographic trends loom for most of North America with the retirement of baby boomers, but a study from the Université de Sherbrooke late year said Quebec is getting old faster and deficits threaten to spiral permanently without decisive action.

Among several alarming indicators, the number of working-age people in Quebec will fall by 4 per cent over the next three decades. The shrinking of the 15-to-64 age group would scarcely budge even if a substantial baby boom started right now. "Even adding in immigration, the number in that age group has started to decline," said economist Luc Godbout, a co-author of the study. "This is not a picture we see in the United States or any other Canadian province."

Quebeckers have heard Liberals promise to tackle public finances before. In 2003, Jean Charest rose to power promising to "re-engineer" the province's economy and public finances to improve productivity and balance the books. He soon retreated from his most ambitious plans in the face of protest, although some progress was made in the good economic times leading up to the 2008 recession.

Mr. Coiteux believes a social consensus now exists for action, and he hopes the review committees he has established will bring people along. "We want input from all citizens, but our objectives are very clear," he said. "We have to make decisions for today and the future. They understand." 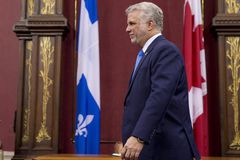 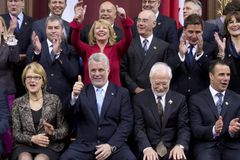 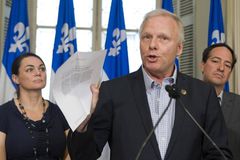 Harper embarks on strategy to win back Quebec voters
July 10, 2014 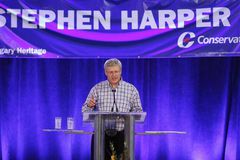