If Canada, the United States and Mexico can see eye to eye on automobiles, not only could the three countries help to rescue the troubled Trans-Pacific Partnership talks, but they could also kick-start a new era of North American co-operation, Mexico's Foreign Minister predicts.

"There are very few issues that would not benefit from a more North American perspective," Jose Antonio Meade told The Globe and Mail in an interview.

"More and more we are coming to realize that there is benefit to trilateralizing the issues."

But analysts warn that it will take more political will than U.S. President Barack Obama has displayed thus far to get the Three Amigos working together again.

Efforts to conclude the Trans-Pacific Partnership negotiation – an ambitious trade agreement that would involve 12 Pacific nations – foundered last month in Maui in part because Canada and Mexico rejected a deal that the United States and Japan had reached on automobiles and auto parts.

Canada and Mexico want a higher threshold of production within the trade zone before cars and car parts are exempt from tariffs than the United States and Japan are proposing.

And feathers were ruffled when Ottawa and Mexico City learned that the United States and Japan had negotiated the lower threshold without consulting them.

"I think it was safe to say it was a surprise," Mr. Meade acknowledged.

To get the talks back on track, trade officials from Canada, the United States and Mexico met in Washington on Thursday in an effort to reach a compromise. In an e-mail, the Canadian Department of Foreign Affairs, Trade and Development described the talks as "constructive," but had no further comment.

The TPP, as it is known, is facing major headwinds, and time is running out to reach an agreement. The U.S. Congress must ratify whatever agreement is reached, the American presidential election could hijack congressional approval and attention in Canada is distracted by the federal election.

But Mr. Meade remained confident that an agreement will be reached, although he would not predict by when.

And he said he believes that agreement would revive a continental approach to tackling major issues affecting the three countries.

Such co-operation has been on the decline, with Canada and Mexico negotiating bilaterally with the United States during the Obama administration, especially on border issues.

The trilateral relationship is "stalled for lack of political ambition and leadership," said Colin Robertson, an analyst in Canada-U.S. relations.

Mr. Obama has shown little interest throughout his presidency in taking a continental approach to issues, preferring to talk with Canada and with Mexico separately – to the extent he talks to them at all.

"There's not that grand vision, which we've had under previous presidents and which I think you have to have," Mr. Robertson observed.

Canada-Mexico relations are also strained as a result of the Stephen Harper government's decision to impose visa requirements on Mexicans visiting Canada.

But a successfully concluded Trans-Pacific Partnership would not only strengthen ties among the 12 Pacific nations that are part of the talks, Mr. Meade predicted, it would also update the two-decade-old North American Free Trade Agreement involving Canada, Mexico and the United States.

And that, in turn, could lead to a continental approach to other pressing issues, especially energy security. "The more we integrate our energy markets the more security we will have, the better prices we will have, the more competitive we will be," Mr. Meade predicted.

Similarly, it makes sense to pursue a continental approach to reducing carbon emissions, he added.

But others are skeptical. Len Edwards, a distinguished fellow at the Centre for International Governance Innovation in Waterloo, Ont., and a former deputy minister of foreign affairs, agreed that a successful conclusion to the TPP talks would rejuvenate NAFTA.

But grappling with challenges in energy, the environment, agriculture, mobility and the like "will require renewed energy, co-operation and commitment," he added. And at the moment, all three are lacking. 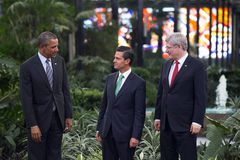