An interprovincial climate summit has laid bare the rifts in the nation's strategy for fighting global warming.

While Ontario and Quebec urged tough action to slash the country's carbon emissions, Saskatchewan argued this would amount to mere "playing on the margins" if other countries don't drive down emissions from coal. Oil-rich Alberta, meanwhile, was largely absent from the equation amid a provincial election campaign, leaving a question mark over reductions from the emissions-intensive oil sands.

On the sidelines of the summit Tuesday, Ontario Premier Kathleen Wynne said she was optimistic such divides could be bridged – but she emphasized that every province, including ones whose economies depend on hydrocarbons, must do its part.

"Our economies are to some extent consequences of our geography, and consequences of the resources that we have in each of our provinces," she said in an interview. "But I just reject the notion there's any province or territory or industry or jurisdiction that can't do anything."

The meeting, which unfolded a day after Ms. Wynne and Premier Philippe Couillard struck a deal for Ontario to join Quebec's cap-and-trade system, ended with a general agreement to fight climate change. But the joint communiqué steered clear of specifics, vaguely referencing such things as "transitioning to a lower-carbon economy" and "strengthening co-operation" on climate measures.

The clock is ticking on a promised interprovincial deal this summer, and the UN climate summit in Paris at the end of the year.

One exchange at the meeting between Ms. Wynne and Saskatchewan Premier Brad Wall showed how difficult achieving a firmer deal may be.

In a presentation about his province's work to develop carbon-capture technology, Mr. Wall pointed out that Canada accounts for less than 2 per cent of the world's carbon emissions. He listed off all the coal power used in China, India and other countries, and argued it would be worth more for Canada to help those nations make their coal cleaner.

"If we're not dealing with baseload electrical generation, or somehow being a part of the technological solution to make that more sustainable around the world, then all of these good intentions, good work, leadership is playing on the margins in terms of what's happening on the planet," he said.

Mr. Wall subsequently also dismissed any notion of Saskatchewan – the largest per-capita emitter in the country – adopting harder targets for its own emissions, such as the 80 per cent Ontario is eventually eyeing.

"We're all going to come over and live in your basement because no one will have a job," Mr. Wall said of the consequences of drastic cuts to Saskatchewan's emissions. "They will have been the ruination of the economy. We have to be a bit more measured than that."

Ms. Wynne countered that even though Canada's emissions are small in absolute terms, it is one of the largest per-capita polluters with per-capita emissions roughly twice those of China.

"I disagree with him that we don't have to do everything in our power to look after our own situation. But I agree with him that we can be leaders in technology," she told The Globe and Mail. "We can't suggest to a developing country, or a less developed country, that they can't expect to have the same quality of life that we have. And we especially can't say that if we're not willing to look at our own practices."

"Canada honestly can't excuse itself of its responsibility," she told reporters. "Although Canada is only 2 per cent of global emissions, it is the ninth-highest emitter in the world."

Ms. Wynne and Mr. Wall subsequently tried to play down the matter, with the Saskatchewan Premier telling reporters, "I do not understand what the perceived disagreement is."

While Ontario is targeting a reduction of 15 per cent of emissions below 1990 levels by 2020 – and 80 per cent by 2050 – much of that work will be erased without further action by Alberta, which currently plans to hike emissions 10 per cent between 2005 and 2020. But any deal with them must wait until that province's election next month.

Alberta Premier Jim Prentice was absent from the summit, as was Prince Edward Island's Wade MacLauchlan, who is also in the middle of an election campaign. B.C.'s Christy Clark took part by telephone, while Nova Scotia's Stephen McNeil sent a cabinet minister in his stead.

Each province listed off what it said it was doing, from Newfoundland and Labrador Premier Paul Davis ramping up renewable power to 98 per cent with Muskrat Falls, to New Brunswick's Brian Gallant touting his efforts to conserve energy and build a smart grid.

And Mr. Couillard signalled that, despite the divides and the absences, the provinces taking part were all determined to move forward in some way.

"Our fellow citizens, our children and future generations will judge us on our courage and the seriousness that we accord this approach," he said. "Canada has an obligation to show results. It's our leadership, our credibility on the international scene and also the economic development and the well-being of our societies that are in play." 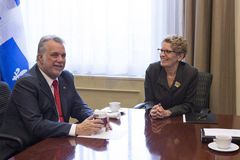 Opinion
Provinces can lead in building a low-carbon economy
April 13, 2015 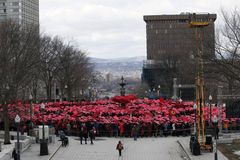 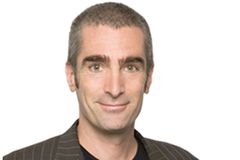 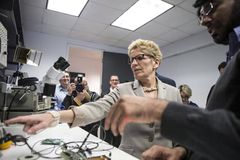 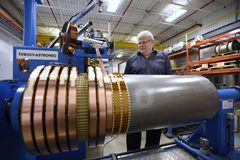 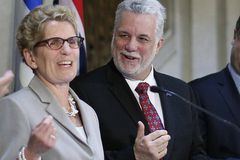