The Federal Court has rejected a lawsuit that sought to block $15-billion in exports of weaponized armoured vehicles to Saudi Arabia, a pariah on human rights, saying Canada's foreign minister has broad authority to approve such shipments and that a judge cannot rule on the morality of the exports.

"The role of the court is not to pass moral judgments on the minister's decision to issue the export permits but only to make sure of the legality of such a decision," Justice Danièle Tremblay-Lamer wrote in a ruling released Tuesday.

At issue was former foreign affairs minister Stéphane Dion's April, 2016, decision to approve export permits for the bulk of the $15-billion arms deal to Saudi Arabia, a country with an abysmal human-rights record that uses armoured vehicles against its own citizens. Riyadh also stands accused by a United Nations panel of violating international humanitarian law with repeated military strikes that have killed civilians in neighbouring Yemen.

The application for judicial review of Mr. Dion's decision was brought by University of Montreal law professor Daniel Turp with legal assistance from the firm of Trudel Johnston & Lespérance.

Mr. Turp argued the foreign minister's decision to allow the combat vehicles – equipped with machine guns and anti-tank cannons – to be sent to Saudi Arabia failed a test for arms sales adopted by federal cabinet in 1986 and which is still in force today. The test says Canada will "closely control" arms exports to countries with a persistent record of serious human-rights violations unless there is "no reasonable risk" that the arms would be used against civilians.

She said her power to review a minister's decision "is limited to making sure that the … decision was exercised in good faith," adding that "the court is satisfied that it was so exercised."

While the Saudis have been filmed using armoured vehicles against their own citizens, Justice Tremblay-Lamer said it was important that there is no evidence demonstrating Canadian-made combat machines have been used in this way.

"For there to be a reasonable risk, there must at least be some connection between Saudi Arabia's alleged human rights violations and the use of the exported goods."

She also noted there are no sanctions in place that would forbid exporting military goods to Saudi Arabia.

Mr. Turp on Tuesday said he is seriously considering appealing the decision. Watchdog groups warn of an eroding human rights situation in Saudi Arabia and Ottawa's own internal 2015 report on the Arab kingdom warned of "concerning human-rights trends."

The Globe and Mail reported in early 2016 that Canadian-made combat vehicles had been spotted being used by the Saudis in their fight against rebels in Yemen. Justice Tremblay-Lamer decided the foreign minister appropriately considered the Yemen conflict when making his decision. "Whether or not one agrees with the outcome of his analysis, the minister's conclusions were based on the evidence in the record."

Again, she noted that Saudi Arabia's violations of international law in Yemen were not "connected with the use of" combat vehicles such as those Canada is selling to Riyadh.

Canada has exported armoured vehicles to Saudi Arabia in the past – sometimes via the United States – but never a deal of this magnitude. The $15-billion deal is the largest advanced-manufacturing export contract in Canadian history.

This deal was brokered by the Harper government but it was the Trudeau government in early 2016 that actually sanctioned the export of the weaponized armoured vehicles, which will be equipped with medium-gauge machine guns or anti-tank cannons. Mr. Dion signed the export permits in early April – meaning the Liberal government took full ownership of the decision.

In her ruling, the Federal Court judge dismissed Mr. Turp's application for judicial review but did not make him pay the Canadian government's legal bill for defending itself in the case.

Mr. Turp argued the Liberals have violated the Geneva Conventions – rules governing armed conflicts – because Article 1 obliges Canada to ensure respect for the conventions. But Justice Tremblay-Lamer said Article 1 does not apply because Canada is not involved in the Yemeni war and that the regional fight is not an international conflict. 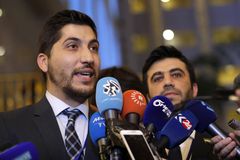