Ottawa-born actor Dan Aykroyd says he hopes learning about dinosaurs will inspire more young Canadians to put down their laptops and explore the rich geographical history of their country.

Long known for his love of the outdoors, the Blues Brothers actor is in Ottawa this week with his wife, Donna Dixon Aykroyd, to hand out an award on behalf of the Royal Canadian Geographical Society. The couple will present a gold medal from the society to Edmonton-based paleontologist Philip Currie Wednesday night for his work deciphering the group behaviour of dinosaurs and their migration patterns.

"We are very moved by the brilliance and the passion of this man," Ms. Dixon Aykroyd said of Dr. Currie.

She said she and the couple's children participated in an archeological dig with Dr. Currie three years ago in Grande Prairie, Alta. "There's like a football field of a mass grave of all these bones in the depths of the soil," Ms. Dixon Aykroyd said. "We were pulling out toe bones, vertebrae, femur bones. It was really, so incredibly exciting."

Since that dig, the couple have been lending their celebrity status and support to the creation of a new museum in Alberta that will bear Dr. Currie's name. The Philip J. Currie Dinosaur Museum is scheduled to open in 2014.

Dr. Currie, who is among the best-known researchers in his field, developed the theory that meat-eating Tyrannosaurs were cunning enough to hunt in packs. Part of his current work examines how migration patterns may have led to the striking similarities that paleontologists have discovered between dinosaurs found in Mongolia and Canada.

"There is so much going on with dinosaurs right now, worldwide," Dr. Currie said. "We really are at a golden age of dinosaur research."

Mr. Aykroyd said he hopes Dr. Currie's work will inspire young people to get involved in exploration and archeological research.

After arriving in Ottawa Tuesday night, Mr. Aykroyd said he discovered his own passion for the outdoors and understanding the planet by watching his father work on the capital region's Gatineau Parkway in the 1950s.

"I watched him, when I was a youth, blast through that granite mountain to build one of the most beautiful scenic highways in the world," Mr. Aykroyd said. "I got my first interest there, looking at these beautiful quartzite pieces that were coming out of the granite mountain."

Mr. Aykroyd said he's hopeful that teaching young people about dinosaurs will help instill a passion in them to take part in work that will take them outside and away from electronic gadgets.

"This field enables a young person to get down, kneel in the dirt, muck around, put your fingers in there, feel a bone, pull it out, see it and then catalogue it. You can just imagine an eight-, nine-, 10-year-old, what this would mean, and the possibility of inspiring someone to go into the field and change their lives."

Mr. Aykroyd said the dinosaur museum has received funding from the province of Alberta, but hasn't yet received the federal funding the couple had hoped for. At the same time, he said the Canadian government has a better track record than the United States in supporting museums and other projects that help young people learn about their history.

"It marks the progress of our planet, and it makes us think about where we're going now, [and] how the planet has evolved," Mr. Aykroyd said. "And it gives children an interest that is not of today, that is not of electronica, that is beyond a video game." 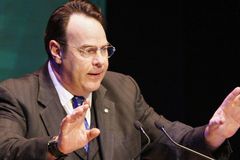